If you could find a stock that's in a place similar to where Disney was in 1957, it could change your life -- provided you held for the long term. Of course, finding the next Disney is far easier said than done -- but here are three analysts who see similarities in Lockheed Martin (NYSE:LMT), The Meet Group, Inc. (NASDAQ:MEET), and IMAX Corporation (NYSE:IMAX)

Here's another company that will stand the test of time

Rich Smith (Lockheed Martin): 1957 was the year Disney went public. It was also the year Disney released Old Yeller, Disney's tale of a boy and his dog, and a classic for the ages. So when you ask me to name a stock that "feels like Disney in 1957," I begin by asking: What other companies out there are building businesses that will last for the ages? Who else is doing something today that folks will still be talking about 60 years from now?

There's only one company that I'm 100% certain will still be around 60 years from now. It's also a company that I can pretty much guarantee that no one will ever associate with Disney. It's Lockheed Martin (NYSE:LMT). And it's because Lockheed Martin has the hottest product on the defense market right now: the F-35 Lightning II stealth fighter.

Not as friendly as Old Yeller, and far less cuddly, Lockheed Martin's F-35 has been called by some of the top brass at the Pentagon probably "the last manned fighter" jet the United States Air Force will ever buy. The Air Force awarded the F-35 contract to Lockheed more than 15 years ago, with the intention that once production commenced, the plane would still be flying 60 years later -- well into the 2070s -- and generating sales, maintenance, services, and upgrades revenues for Lockheed Martin all along the way.

It's not often you find a company with that long of a guarantee of repeat business for its products -- backed by the full faith and credit of the United States government and its money-printing presses. With that advantage in its pocket, I'm almost tempted to say that Lockheed Martin "feels" to me more like Disney than Disney does itself.

Nothing Goofy about this growth stock

Sean Williams (Meet Group): When I think of Disney, entertainment and content dominance come to mind. But in 1957, the company was still coming into its own and finding its niche. A small-cap growth stock that somewhat resembles the rise of the House of Mouse in my book is The Meet Group, a provider of mobile-based apps that allow users to connect with one another.

Meet Group is hardly the king of content like Disney, but it's slowly but surely relying on a combination of inorganic and organic growth to build its app-based portfolio.

Last year the company acquired Skout for $55 million in a cash-and-stock deal, and in April it closed the acquisition of If(we) for $60 million in cash to gain hold of the Tagged and Hi5 brands. The result is Meet Group is building a larger, more diverse user base that now includes 10.6 million mobile monthly active users, 2.8 million mobile daily active users (representing 40% year-over-year growth as of Q1 2017), and an average of 65.3 million chats per day, a 19% year-over-year increase in 2017.

Organically, the company is making a number of moves. It's boosting its marketing budget to 20% of revenue from 16% of revenue and expecting a 100% return on its investment within a year. Considering its portfolio of mobile apps is growing, it'll be able to cross-promote and potentially charge higher ad prices as its average daily user base increases.

Meet Group is also experimenting with live video, which is being viewed by between 13% and 15% of users. The company mentioned in its press release that 65,000 broadcasts on a single day generated 3 million views and 2 million live chats. While there are bound to be tweaks needed to refine the live video experience, it's clear that Meet Group has channels to grow its business organically.

With long-term growth potential of perhaps 15% per year and a PEG ratio below 0.5, Meet Group could be the next Disney-like stock in the making.

The next big thing?

Daniel Miller (IMAX Corporation): Finding the next Disney sounds pretty implausible, or at least the odds are stacked against even the savviest of investors. However, that doesn't mean you can't gain an advantage looking for companies that boast a couple of similar qualities. To me, IMAX Corporation has a few intriguing aspects to its business and a brand that could make it something special decades down the road. 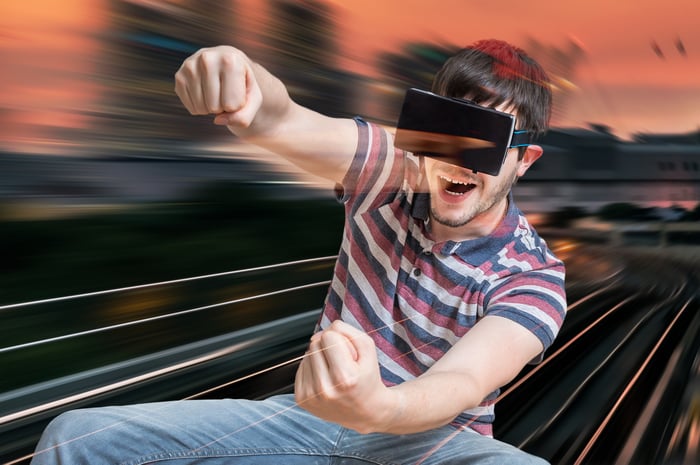 As millennials continue to age, entertainment is probably going to be shaped around their habits, which have focused more on experiences. Sure, the streaming industry has made staying at home a popular option, but it's going to put the onus on traditional companies to create desirable consumer experiences to lure people out of their houses -- and IMAX has the ability to grow into that type of business.

Already, an IMAX theatre offers a better experience than your traditional movie theater with its large-screen format and 3D content. And when the IMAX theater experience is doing well, it drives the company's technology hardware and brand-licensing services.

What's exciting for long-term investors, similar to how Disney changed entertainment, is its potential for virtual reality. Right now the company is testing a Los Angeles pilot with encouraging results. As of the company's May investor-day presentation, the company had more than 25,000 virtual-reality admissions, with a weekly revenue run rate of $15,000 and 94% of consumers reportedly satisfied or highly satisfied with the experience.

IMAX is a long way from being the next Disney, but its brand is already associated with a more premium theater experience. And if it can revolutionize the way location-based virtual reality attracts consumers, it could be a game-changer, much the way Disney was about to be all those decades ago.

10 stocks we like better than IMAX
When investing geniuses David and Tom Gardner have a stock tip, it can pay to listen. After all, the newsletter they have run for over a decade, Motley Fool Stock Advisor, has tripled the market.*

David and Tom just revealed what they believe are the 10 best stocks for investors to buy right now... and IMAX wasn't one of them! That's right -- they think these 10 stocks are even better buys.