If you like sporadic dividend payouts, then you might be a fan of Costco (NASDAQ:COST) stock. The warehouse retailer commits to sending an unusually small portion of earnings to shareholders through regular dividends that it supplements with "special" dividends like the massive $7-per-share payout that hit shareholders' accounts last month.

For those investors aiming for more predictable -- yet still substantial -- dividends, here are a few reasons to consider McDonald's (NYSE:MCD), Wal-Mart (NYSE:WMT) and Target (NYSE:TGT).

At 2.5%, the yield of McDonald's is more than double Costco's. The fast-food titan is also about as dependable a divided stock as you can find on the market, given that it has boosted its payout for 41 consecutive years.

Like Costco, McDonald's boasts a business model that provides more stability than peers. In Costco's case, it's the fact that it generates most of its profits from membership sales rather than product markups that delivers this key advantage. For McDonald's, a similar benefit comes from a franchising approach that produces the majority of earnings through rent, royalty, and fees rather than low-margin food sales.

McDonald's is pushing deeper into the franchising model in 2017, with plans to lower its percentage of company-owned locations down to 5% over the long term from the current 15% mark. That move should boost profitability and further reduce its need for capital. Sure, the company must address the market-share struggles that have pushed customer traffic down over the past few years. But even moderate sales growth, combined with the cash raised from selling thousands of stores to franchisees, should power healthy dividend gains over the coming years.

Wal-Mart is Costco's biggest competitor and frequently finds itself trailing the warehouse specialist in key operating metrics. Costco's 4% comparable-store sales gain last year, for example, was its worst showing since 2010. However, it still trounced Wal-Mart's 1% uptick. Yet income investors have a few good reasons to prefer Wal-Mart over Costco, including its much-higher yield (2.6% versus Costco's 1.1%) and its heftier payout ratio (46% versus Costco's 31%). As for its weaker operations, while the retailing giant isn't likely to post Costco-like growth numbers any time soon, it is aggressively attacking the online sales channel from several angles including making multibillion-dollar acquisitions. In a decade, these investments might leave Wal-Mart in a stronger sales position, especially if the consumer rush toward online shopping turns into a stampede.

There are plenty of good reasons to be pessimistic about Target's business today, given persistently weak customer traffic and the retailer's outlook for soft profit growth ahead. Specifically, executives have warned investors to expect lower earnings this year as the company cuts prices to better compete with rivals like Wal-Mart.

Target has navigated through similar tough selling environments in the past, though, and it has always managed to guard its financial strength in the process. That's why it is one of just a few retailers that have raised their dividends for over 25 consecutive years. 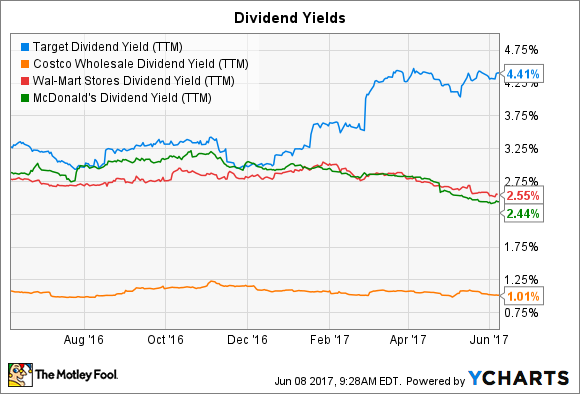 Target's 4.4% dividend yield is far above the market average. That's a reflection of an especially gloomy business outlook that income investors will want to consider before buying the stock. This payout shows no signs of requiring a cut, though, as it accounts for less than 50% of earnings over the past year.