Energy logistics and manufacturing giant Phillips 66 (NYSE:PSX) has made it clear that it doesn't view its refining segment as a growth business. CEO Greg Garland said as much last quarter, pointing out on the company's conference call that while he thinks "refining is a good business. It's just, long-term, I just don't see it growing." That's because vehicle fuel efficiency, among other factors, should keep a lid on gasoline demand growth.

Given those statements, it's somewhat surprising to learn that a company that has no plans to invest in growing its refining capacity still spent $384 million on growth-focused refining projects last year. That's until we drill down a little deeper and see that these projects aren't increasing its processing capacity but instead will grow its ability to earn more money from its existing refining assets. 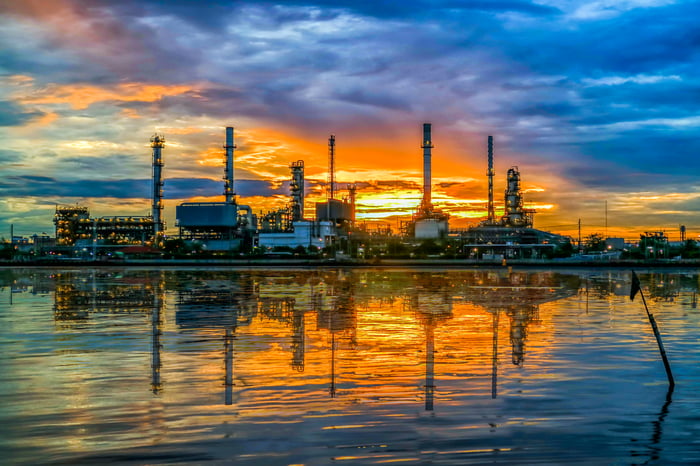 Last year, Phillips 66 spent $2.8 billion on capital projects across its portfolio. Of that amount, $1.2 billion went toward its refining segment, with 70% of the money getting spent on reliability, safety, and environmental projects to sustain its current operations and comply with new specifications. That meant the company spent 30% of its refining capital, or about $384 million, on growth projects. However, instead of expanding its current 2.2 million-barrel-a-day refining capacity, that money would be spent on projects to lower feedstock costs, and so it can churn out higher-value refined products, which will boost the profitability of several existing refineries.

For example, one of the projects the company undertook was modernizing the Fluid Catalytic Cracking Unit (FCC) at its Bayway refinery in New Jersey. It replaced the existing older reactor with modern technology, which would enable it to turn the same 145,000 barrels of oil per day it currently processes into 4,000 additional barrels a day of higher-value gasoline and diesel. As a result, Phillips 66 can earn a higher-margin off the barrels it refines.

Another investment has been the Vacuum Improvement Project at its Billings refinery in Montana. This project will enable that refinery to process more Canadian crude, though its overall crude refining capacity won't change. Currently, the refinery processes a mix of heavy, high-sulfur oil from Canada as well as high- and low-sulfur domestic crude blends. However, this upgrade will allow the facility to process up to 100% heavy Canadian crude, which is cheaper than low-sulfur oil because it's harder to refine. By increasing its ability to process this cheaper oil, Phillips 66 can lower costs and improve margins. 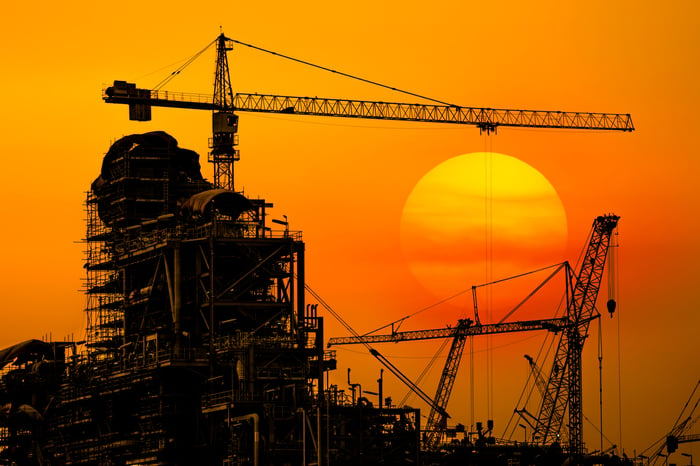 Phillips 66 plans to continue investing in margin-enhancing refining projects in 2017. Because it completed most of its major refinery turnarounds last year, it only expects to invest $905 million in capital on the segment this year. Of that amount, $317 million will be "directed toward small, high-return, quick pay-out projects, primarily to reduce feedstock costs and improve clean product yields," including finishing up the Bayway and Billings projects. The company also plans to complete a diesel recovery project at its Ponca City refinery in Oklahoma by the fourth quarter of this year and has a similar FCC modernization underway at its Wood River refinery in Illinois that should start up next year.

In addition to these projects, Phillips 66 announced that its MLP, Phillips 66 Partners (NYSE:PSXP), is developing a new isomerization unit to increase production of higher-octane gasoline blend components at its Lake Charles Refinery in Louisiana. If approved next year, Phillips 66 Partners would invest $200 million on the project and would provide processing services to its parent under a long-term agreement. This partnership will enable Phillips 66 to increase production of higher-value gasoline at the refinery and improve margins.

Phillips 66 has no plans to process any more oil per day than it currently refines. That said, it wants to maximize the value of those barrels, which is why it's investing in smaller projects that can increase its ability to process lower-cost blends of oil and improve the percentage of higher-value refined products it produces. These investments should lower costs and improve margins, enabling the company to boost the profitability of its existing refineries.