Please ensure Javascript is enabled for purposes of website accessibility
Log In Help Join The Motley Fool
Free Article Join Over 1 Million Premium Members And Get More In-Depth Stock Guidance and Research
By Dan Caplinger - Jun 8, 2017 at 10:20AM

Winter conditions are always a big variable for ski resorts, and industry giant Vail Resorts (MTN 2.01%) relies on favorable weather to drive results. With a number of acquisitions in recent years, including the Perisher property in Australia and the premier Whistler Blackcomb resort in British Columbia, Vail Resorts has sought to diversify its holdings while offering season pass holders a broader experience.

Coming into Thursday's fiscal third-quarter financial report, Vail Resorts investors were looking for the ski resort's high growth to persist. Vail had solid results, but it cited weaker snowfall in Colorado late in the season as a drag on its overall performance, and that left some shareholders wishing for more. Let's look more closely at Vail Resorts and what its results say about its future. 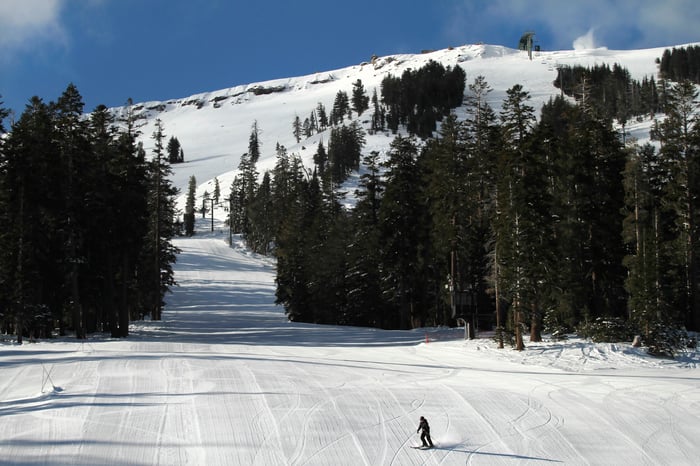 Vail Resorts' fiscal third-quarter results didn't quite live up to the high expectations that many of those following the stock had. Revenue gained 23% to $794.6 million, but even though that was a faster pace of growth than the fiscal second quarter, it fell short of the more than $801 million that investors had wanted to see. Net income rose at a slower 15% pace to $181.1 million, and that worked out to $4.40 per share. That was less than the consensus forecast from investors of $4.82 per share, although the numbers included several one-time charges that would have brought adjusted earnings up to the neighborhood of what investors had expected.

Taking a closer look at Vail's results, the Whistler acquisition once again was a major growth driver during the quarter. Total lift revenue was up more than 25%, with organic growth accounting for less than 6 percentage points of the increase. Of the 23.5% rise in ski school revenue, more than 20 percentage points came from Whistler, and dining revenue's 29% increase from year-ago levels came also solely from the Canadian premier resort. Retail and rental revenue showed the same patterns.

Vail's lodging segment had much less attractive performance. Net revenue fell 6%, with the company citing "variable late season conditions in Colorado" along with some one-time impacts for the drop. Occupancy fell nearly four percentage points, although an 8.5% average daily rate helped to offset the weaker traffic. Pretax operating earnings dropped more than 30%. Meanwhile, in the real estate segment, revenue rose, but one-time charges related to the Town of Vail's public parking structure sent the unit to an operating loss.

CEO Rob Katz again highlighted the positives of Vail Resorts' season. "Our year-to-date results highlight the continued success of our season pass and guest-focused marketing efforts," Katz said, "the importance of geographic and currency diversification in our resort network, and the outstanding experience we provide at our resorts." He also discussed the impacts on the lodging and real estate units but put them into the broader context of the overall business.

Already, Vail is focusing on the 2017-2018 season, and pass sales are looking good. Through May 30, pass sales were up 10% in terms of passes sold and 16% in dollar value compared to the previous year, and that especially encouraging given the huge gains of nearly 30% that Vail experienced last year. In particular, Katz pointed to Northern California and the Pacific Northwest as drivers of pass sales, because favorable weather conditions there and the inclusion of Whistler Blackcomb on the Epic Pass offering drove interest. Whistler also helped improve sales of Australian passes, as the company noted that Whistler is a favored destination for Australians traveling to North America.

Further refinements of Vail's full-year guidance, however, reflected the weakness in bottom-line growth during the third quarter. Total EBITDA of $589 million to $600 million narrowed the previous guidance range, but net income of $183 million to $201 million was down roughly 7% to 10% from where Vail Resorts saw itself ending the year in its projections three months ago.

Helping to drive growth forward will be the acquisition of Stowe in Vermont, which closed on June 7. The purchase price came out to $41 million, and Epic Pass buyers will have access to the northern Vermont resort for the 2017-2018 season.

Vail Resorts investors didn't seem satisfied with the report, and the stock fell more than 3% in pre-market trading following the announcement. Nevertheless, as Vail continues to pick up more properties, investors can expect network effects to expand and drive its revenue and profits higher year after year.