Management is confident that its business model is well suited to meet the shale drilling industry's needs over the next several years.

Helmerich & Payne's (HP 0.91%) management doesn't mince words when it comes to its status in the North American land drilling market: H&P is the best, full stop. To be able to say that, however, it needs to back it up, and management used its most recent conference call to highlight why it thinks it can make that claim.

Here are several quotes from its last conference call that encapsulate why management believes it's in a much better strategic position than its peers in the land drilling market and what that will likely mean for investors over the next few years. 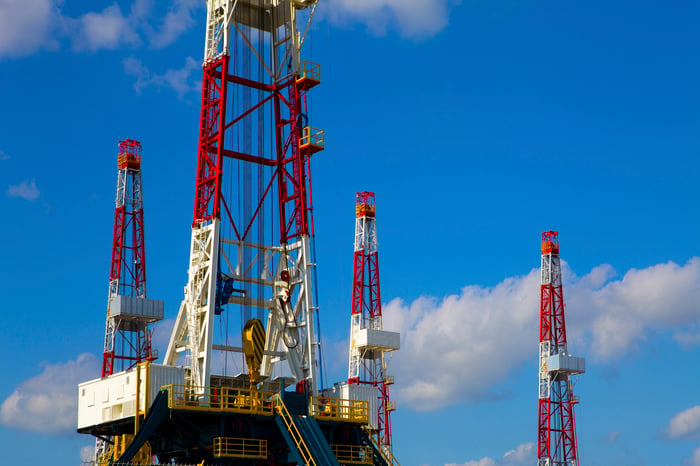 One thing that has separated Helmerich & Payne from its competition over the years has been its high-specification fleet and the ability to react to the market thanks to its sound balance sheet. There is another aspect that makes this company one of the best in the business, and CEO John Lindsay opened his remarks by reminding everyone that Helmerich & Payne is both a lessor and manufacturer of rigs. Having those two capabilities goes a long way in making its fleet valuable to customers.

Today, we lead the industry with 122 super-spec capable FlexRigs in the U.S. land market and another 50 rigs that are currently active and can also be upgraded to super-spec capability. The current and informal industry definition for super-spec capability refers to rigs with at least the following attributes: AC drive technology; 1,500-horsepower drawworks capacity; 750,000-pound hook load rating; 7,500 PSI mud systems; and multiple well pad drilling capability.

H&P not only has a significant lead in active super-spec rigs, but we also have approximately 100 idle AC FlexRigs that are candidates for upgrades to super-spec status should there be market demand to do so. This represents about 2/3 of the number of idle high-spec AC drive rigs in the U.S. land industry fleet today. Uniform designed characteristics allow us to upgrade FlexRigs to super-spec capability in a very capital-efficient manner, utilizing a lean manufacturing approach we successfully employed during our previous expansion.

That combination means that it can reconfigure 100 idle rigs to meet producers' demands faster than any other competitor. That will likely go a long way toward capturing market share as all available super-spec rigs get put to work.

Back to the peak?

Before the oil price crash in 2014, there were about 1,800 active land rigs in the United States. Since then, producers, oil services companies, and rig technology have evolved so much that it takes fewer rigs to achieve the same levels of production. We are currently producing 500,000 barrels per day less than the production peak in 2015, yet total active rigs in the field are about half what they were in 2014.

This seems like an ominous sign for rig companies. It suggests that many of those idle rigs may never find work again. According to Lindsay, though, this is less of a problem for Helmerich & Payne.

If we were to assume, and we realize that maybe a big if, but if market conditions continue to improve over the coming years, we could very feasibly exceed H&P's 2014 peak level of quarterly activity of approximately 300 active rigs in the U.S. with our existing FlexRig fleet, including the upgrades required for the rigs drilling more complex wells. Other large land drillers in this segment are currently experiencing activity levels of less than or close to half of their 2014 peak levels and are reportedly already constrained to grow using their existing idled rigs, many of which are not suitable for upgrades.

Continued growth at current rates over the next couple of years is unrealistic, but a more modest pace is achievable. What Lindsay is suggesting is that Helmerich & Payne will continue to capture market share from its competition. It has already grown its market share of land rigs from 14% pre-2014 peak to 19% today. With its idle fleet that can be upgraded and deployed faster than competitors can build new rigs, it's entirely plausible to see H&P's market share grow considerably in the coming quarters.

No need to invest heavily

Another added benefit of this adaptable rig platform that can easily accept upgrades is that management doesn't need to invest in completely new rigs. According to Lindsay, there are more than enough upgradable idle rigs to meet any shorter-term market demand.

Our strategy going forward is to continue growing market share in this favorable environment. We don't foresee investing in new rigs at this stage of the cycle, especially as we continue to demonstrate we can upgrade our fleet to meet the needs in the market and deliver best-in-class performance with our FlexRig fleet.

The fact that the company won't need to commit capital to newbuilds bodes well for investors that see this stock as cheap. It means that it will be able to build its cash position that can be used to raise its dividend or even buy back stock at a pretty steep discount today.

Over the past few quarters, operating costs have run up and have kept Helmerich & Payne from achieving its higher-than-industry-average margins. According to CFO Juan Pablo Tardio, though, those higher costs should become less of an issue over time.

Looking ahead at the third quarter of fiscal 2017, we expect continued improvement in activity and a sequential increase of roughly 25% in quarterly revenue days. With average spot pricing up 9% since our last call and currently in the high teens, we expect the adjusted average rig revenue per day to decline to approximately $21,000. The average rig expense per day level is expected to significantly decrease to roughly $14,300 as rig start-up expenses sequentially have a lower level of impact on the average during the third fiscal quarter.

While rig expenses will start to come down a bit, the next question is how much the company will be able to preserve rig revenue. If it can hold steady for a few quarters, we should see decent margin expansion.

There has been a bit of chatter lately about a slowdown in the onshore land market. In fact, Goldman Sachs recently downgraded Helmerich & Payne's stock because of that very threat. While some investors may be concerned by this, Lindsay's response to this question should ease some of those concerns.

I would say that we're seeing less inquiries on rigs. We're still receiving inquiries but not to the same level, not to the same pace that we were previously. Of course, you have to kind of put that in perspective. This has been a -- at least for us, it's been an increase in activity that we've never seen before. So it's not really surprising that we're seeing it pull back a little bit. That was our expectation. Quite frankly, my expectation would have been it would have pulled back a little sooner than when it has.

I should note that this conference call took place before OPEC's decision to maintain its current production cut rates, the subsequent decline in oil prices, and the Goldman downgrade. Many of those rig getting deployed today are on the spot market, which means they can stop work at any given moment. At today's prices, there isn't a whole lot of risk that producers will end current operations, but the incentive to add new rigs is getting smaller by the day. It will be interesting to see what happens in the next quarter as these new oil prices sink in.