Wal-Mart is behind the curve, but it's positioning itself to catch up to its biggest digital rival. Will its stab at innovation pay off?

In the not-so-distant past, Wal-Mart (WMT 0.27%) was the retail industry disruptor with an advanced supply chain network enabling a wide array of products to be sold at cheap prices. Smaller retailers with more limited lineups of merchandise closed up shop to make way for what is now the world's largest seller of stuff.

Fast-forward to today, and a new disruptor has emerged: internet retailers, with Amazon (AMZN -0.31%) leading the way. While Wal-Mart still reigns atop the retail world, Amazon has been quickly catching up in recent years, offering convenience, competitive pricing, and quick shipping direct to consumers' homes. 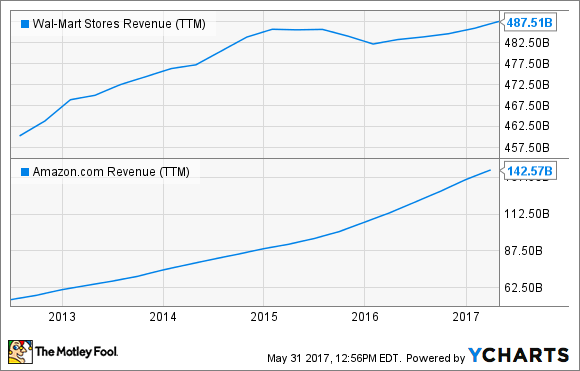 In an attempt to power its own digital selling, Wal Mart bought jet.com last year for $3 billion and has moved its CEO, Marc Lore, into a leadership position as Wal-Mart makes its digital moves. Wal-Mart received mixed reviews on the jet.com purchase, and it followed it up with a few more acquisitions since.

These online retailers join Wal-Mart Labs, the Silicon Valley-based division tasked with bringing the company's physical stores and online stores into a well-integrated enterprise. More recently, the company took things one step further when it launched Store No. 8, an incubator that provides a safe haven and funding for start-up ideas in the retail industry. "Store No. 8 is where wild ideas, impossible notions, and big bets become scaleable realities," says the company.

A proper Amazon rival in the making?

So far, Wal-Mart isn't innovating as much as it is trying to buy its way into internet relevance. That aside, results were impressive during the first quarter of the year.

The value of merchandise sold online increased 69% year-over-year on Walmart.com. The company said most of this growth was organic growth not driven by the recent acquisitions. Total company comparable sales increased 1.4%, driven in large part by that online figure. 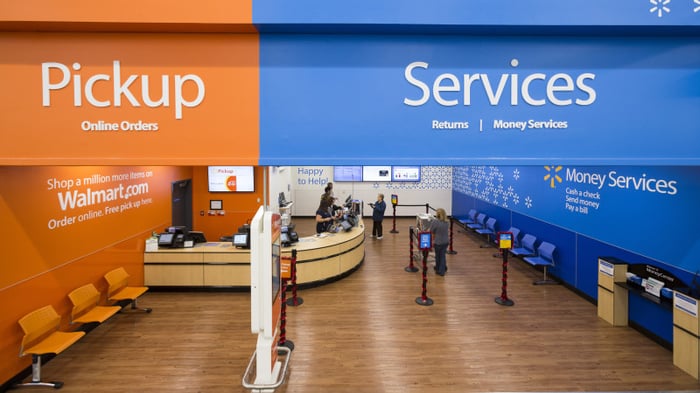 Wal-Mart has been working to integrate its physical stores with online initiatives. Image source: Wal-Mart.

A big help to the strong growth is the expansion of products available online. Wal-Mart grew first- and third-party items for sale online to 50 million from 10 million last year. That compares to about 370 million on Amazon, but one could argue that selling anything imaginable is not Wal-Mart's thing.

Amazon probably isn't sweating the numbers too much as only a small percentage of Wal-Mart's business is via the internet. Wal-Mart is making some purposeful moves, however, and it will be interesting to see how the efforts ramp up and what comes out of Store No. 8.

Wal-Mart is unlikely to see explosive growth in sales as a result of its online initiatives, but it should help stave off online rivals poaching its business.

That being said, Wal-Mart is not an investment for those looking for growth through new technology, it's a stable investment for income. The company currently pays a 2.6% annual dividend yield and has increased that dividend every year since initiating it in 1974. 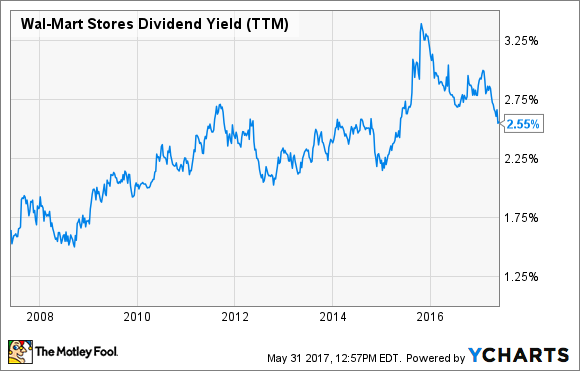 It is doubtful the company will out-innovate Amazon or any other online retailer, but the steps it is taking should help Wal-Mart support its dividend and make possible future dividend increases. That's welcome news for investors looking for steady and stable income.