If you're a dividend investor who seeks stability and welcomes the opportunity for outsize total returns, look no further than two giants in the global hotel industry: Marriott International Inc. (NASDAQ:MAR) and InterContinental Hotels Group PLC (NYSE:IHG). The two companies operate on similar business models that generate ample cash flow for shareholder distributions, while providing growth that has ignited share-price appreciation.

Following its November acquisition of Starwood Hotels & Resorts Worldwide, Marriott now claims title to the world's largest hotel company, with 6,161 properties within its system. That equates to a staggering 1.2 million rooms. The company's 30 hotel brands include its namesake Marriott label, and well-established chains such as Ritz-Carlton, Westin Hotels, Sheraton, Courtyard, and Residence Inn. 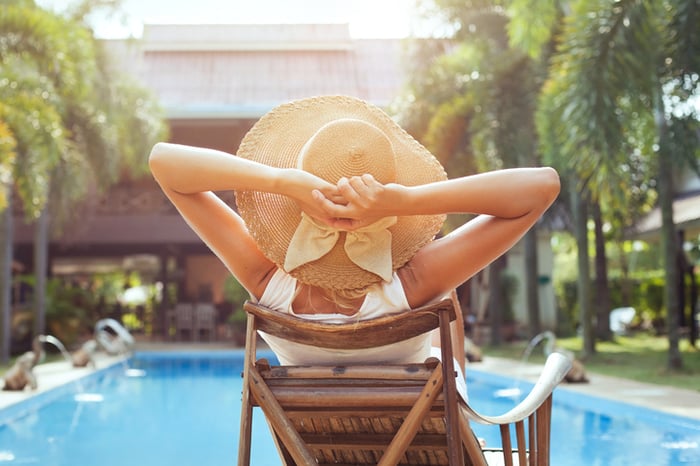 Marriott employs a "capital-light" model, in that it generates more revenue from franchising and managing hotels than it does from owning and operating properties. In its most recent quarter, the company generated $782 million from franchise fees and management activities, or about 64% of total revenue after adjusting for cost reimbursements.

This business model has provided Marriott with a consistent operating profit margin, which has tracked within a range of 7.5% to 9.5% over the past five years. The company has seen rapid expansion through both franchising activities and acquisitions, and it maintains a wide path to future growth, with 430,000 rooms in its development pipeline.

Marriott's quarterly dividend of $0.33 per share works out to a yield of just 1.3%, but the company's payout ratio of 44% indicates that the dividend has the potential to move higher. Marriott has increased its dividend every year since 2009.

In buying Marriott, you acquire shares of a stable corporation with a huge market capitalization of $39 billion, which nonetheless is as aggressive in its approach to growth as what many smaller competitors are doing. And don't let that relatively modest dividend yield turn you away: Investors love Marriott's capital-light approach and have rewarded "MAR" shares with a total return more worthy of a tech company than a hotel operator over the past five years: 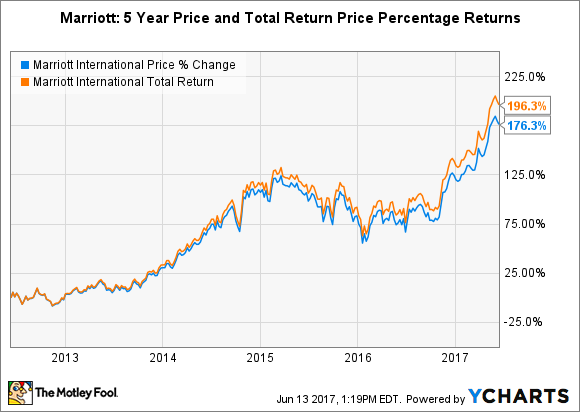 InterContinental Hotels Group is the world's third largest hotel company, after Marriott and competitor Hilton Worldwide Holdings (NYSE:HLT), boasting 767,000 hotels within its system. The corporation is known for luxury brands including InterContinental, the boutique Kimpton label, and Hualuxe Hotels and Resorts, which management claims is "the first upscale international hotel brand designed specifically for Chinese guests."

InterContinental recently completed a multi-year effort to become less capital-intensive, in the mode of Marriott International. Last year, 82% of InterContinental's $1.7 billion in net revenue derived from franchise fees and management fees. As the organization has gradually disposed of hotels to become more capital-light, it's shared those proceeds with investors, passing on a special dividend of $1.5 billion in 2016 after completing sales of hotels in Paris and Hong Kong.

In May, the company paid out another special dividend of $400 million, or $0.66 per share (on a share price of $55). This distribution was significant, as it was IHG's first special dividend generated solely from company profits, and not from a sale or disposition.

Currently, InterContinental's dividend yields 1.75%. But the potential for additional special dividends implies that this shareholder-friendly global hotelier may deliver a higher future yield.

Over the past five years, IHG's stock has appreciated 65%, a credible if conservative ascent. But if an investor had reinvested each of IHG's special dividends, the return would have increased by roughly 95 percentage points, to 165%. This places IHG's total return within striking distance of Marriott's extraordinary performance. The two trend lines in the following chart show the power of reinvesting those special dividends: 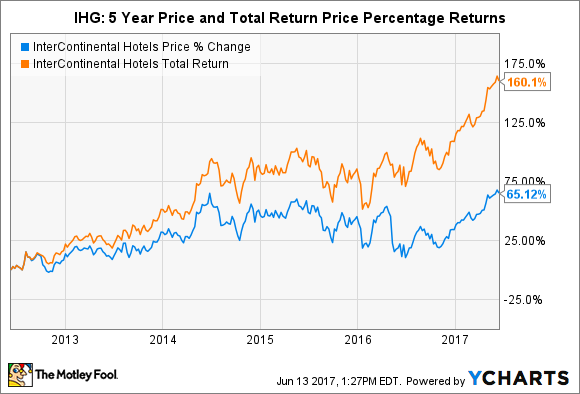 Finally, one underappreciated characteristic of IHG is its profitability. Because the company derives an even higher percentage of revenue from franchise and management income than Marriott (and most other peers), it generates enviable operating income. In 2016, IHG produced an operating income margin of over 46%, and a net profit margin of 25%. Like Marriott, InterContinental offers quality alongside relative stability, and investors in hotel-industry stocks should consider it a core holding candidate within a dividend-oriented portfolio.