Please ensure Javascript is enabled for purposes of website accessibility
Log In Help Join The Motley Fool
Free Article Join Over 1 Million Premium Members And Get More In-Depth Stock Guidance and Research
By Daniel Sparks - Updated Jun 14, 2017 at 8:38AM

Tesla may double the number of chargers in its network in 2017, and then double it again next year.

Tesla's (TSLA -6.63%) Supercharger network is already far bigger than any other fast-charging electric vehicle network in the world, and it's growing by leaps and bounds. The 861 station network boasts 5,655 Superchargers that can juice a Tesla for 170 miles of range in as little as 30 minutes. That is up from 3,600 Superchargers when the Model 3 was unveiled last March.

But Tesla's Supercharger network is about to start expanding at an even faster rate.

In April, Tesla already said it had big plans for its Supercharger network. The company announced it would expand its global Supercharger count from about 5,400 at the time to 10,000 by the end of 2017. Last week, however, Tesla CEO Elon Musk went further. He said the number of Superchargers deployed could increase by between 50% and 100% in 2018.

"We're not going to stop. We're just going to keep going as fast as we can to make sure people can go wherever they want whenever they want with convenience, keep upgrading the capability of the Supercharger system so it can charge things faster," Musk explained at Tesla's annual shareholder meeting. 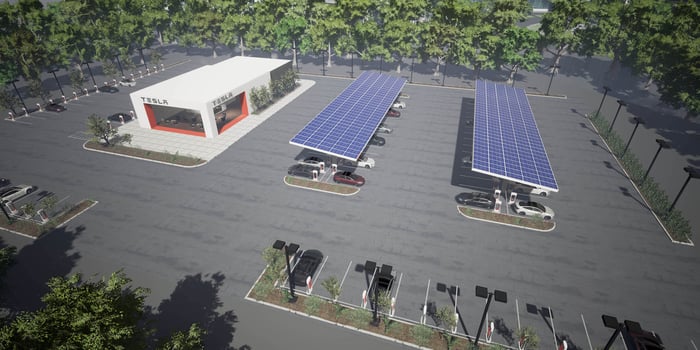 Rendering of a Tesla Supercharger station with a customer center. Image source: Tesla.

Finally, Tesla has recently committed to eventually converting all Superchargers to 100% solar powered, using a combination of solar panels and stationary energy storage. Musk said last week on Twitter that "Over time, almost all [Superchargers] will disconnect from the electricity grid."

Why Tesla's Supercharger network is key

It would be difficult to overstate the relevance of Tesla's Supercharger network in the value proposition for buying a Tesla. The network is already integral to the ownership experience. It enables long-distance travel anywhere in the United States and Western Europe, as well as in most of China. Further, since no other charging network offers a charge rate fast enough to make charging a Tesla convenient, owners are almost completely reliant on Tesla-branded chargers for their charging needs while traveling.

As the automaker brings its higher-volume Model 3 to market in the second half of the year, Tesla's Supercharger network will need to be able to support a much larger volume of vehicles. With the Model 3, Tesla expects its annualized vehicle production rate to increase from a run-rate of about 100,000 units today to 500,000 next year. By significantly increasing the number of Superchargers in its network, Tesla hopes it can eliminate wait times, and make long-distance travel as convenient as it is in a gas-powered vehicle.