Over the past year or two, Apple (NASDAQ:AAPL) CEO Tim Cook has talked up the potential of augmented reality (AR) on multiple occasions. The chief executive has made the case for mainstream consumer applications, while pointing out that virtual reality (VR) can be isolating and remains a niche use case today. On the other hand, AR is more "broad-based" and "profound," by Cook's estimation.

Now we may know why he kept discussing the technology, foreshadowing Apple's inevitable entry: He can't contain his excitement. 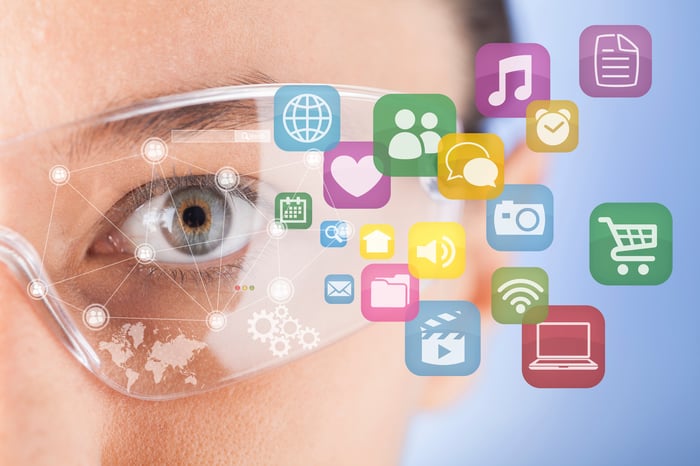 "I just want to yell out and scream"

In a preview of an upcoming interview in Bloomberg Businessweek that covers a wide range of topics from HomePod to repatriation taxes, Cook also hits on AR. When asked about the future of AR, Cook responded:

It's comically difficult to imagine the calm and collected Cook yelling and screaming about anything, but it helps explain why Cook tipped his hand by discussing AR so much before Apple had anything to officially unveil. Adding a new AR software development kit (SDK) called ARKit to iOS 11 was one of the biggest announcements made during the company's WWDC developer conference earlier this month (which is where the Bloomberg Businessweek interview took place).

Cook also notes that AR has potential that includes both enterprise and consumer applications. "There's not a lot of things that do that," Cook says. At the same time, there's a clear admission that this is just the beginning, and the "technology's not complete yet." That's a huge opportunity, and the executive firmly believes that once people start to realize and appreciate AR's potential, it will take off.

There's an interesting subtext to Cook's comments on AR. By saying that AR capabilities need to be embedded directly into the operating system to achieve mainstream adoption, Cook could be taking a small jab at Facebook (NASDAQ:FB). At Facebook's own F8 developer conference in April, the social network unveiled a suite of AR tools (Frames Studio and AR Studio) that it calls its Camera Effects Platform. "We're making the camera the first augmented reality platform," the company proclaimed.

The camera is just a mere starting point for Facebook, as CEO Mark Zuckerberg envisions a future where AR can deliver countless experiences without the need for the physical products that deliver those experiences today. However, Facebook has always been a platform on top of a platform, at least on mobile; it doesn't own or develop the underlying operating system, something it has long considered a risk factor in its filings: "Our user growth, engagement, and monetization on mobile devices depend upon effective operation with mobile operating systems, networks, and standards that we do not control."

AR will fundamentally be a mobile experience; no one is going to lug around a laptop and use the webcam as a viewfinder. For the time being, an AR platform built into the camera within Facebook's core app will naturally get less attention than an AR platform integrated directly into the operating system, so Facebook may have to take a back seat to Apple's own AR ambitions.

That is, at least until we get to AR headsets, which both companies appear to be developing. Doing so would give Facebook a chance to break free and create its own primary platform instead of relying on others'. Facebook and Apple don't really compete meaningfully these days, but that will change as AR emerges as a candidate for the next major computing platform.