When it comes to this summer's crop of new experiences, Kraken Unleashed will fall a distant third to Disney's (NYSE:DIS) Pandora -- The World of Avatar and Comcast's (NASDAQ:CMCSA) Volcano Bay water park. It may even wind up generating less buzz than the Southeast's first wooden coaster with a 360-degree barrel roll that will open at Kissimmee's Fun Spot America next week. 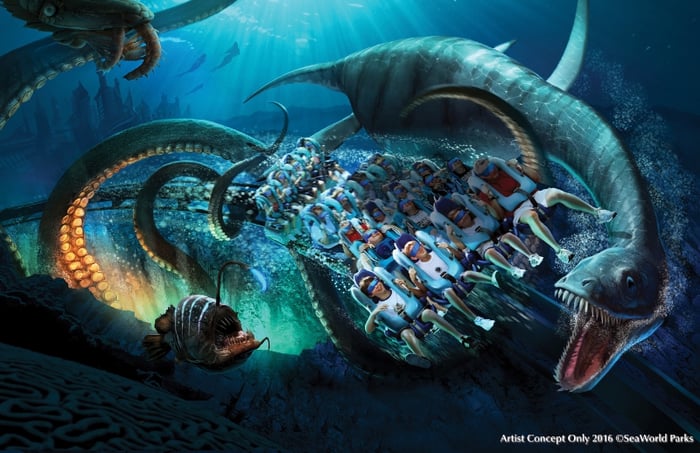 SeaWorld Orlando can use the boost. Its attendance has been languishing at a time when Comcast is growing briskly and Disney -- outside of a rare slip in turnstile clicks last year -- is holding up just fine.

Kraken Unleashed isn't likely to turn things around at SeaWorld Orlando. Virtual reality is a neat trick, but it does lower the ride's capacity given the long load times as riders are fitted with the optional virtual reality headsets. The marine life-themed park opened Mako last summer, Florida's fastest, tallest, and longest roller coaster. If that bar-raising thrill ride didn't drum up an uptick in attendance it's not going to happen by dolling up an aging coaster with new visuals. However, SeaWorld Orlando may still be a beneficiary of ambitious additions at Disney and Comcast. Tourism should spike in Orlando on the hype being generated by Pandora and Volcano Bay. If tourists find their way to SeaWorld on a day off, you won't hear SeaWorld Entertainment investors complain about the struggling park operator merely phoning it in this year.

The updated coaster isn't the only thing that SeaWorld's adding to its most visited park this summer. A new bubbles-themed show and a nightly Electric Ocean celebration with lasers and fireworks hope to keep things interesting.

Analysts aren't holding out for much. They see revenue climbing a mere 1% this year, accelerating to just 2% come 2018 when SeaWorld Orlando will introduce a more hype-worthy river rapids ride.

SeaWorld is doing the right thing, emphasizing new rides and attractions as it relies less on its controversial orca and dolphin shows. Some of the new rides -- including the Wave Breaker coaster that opened at SeaWorld San Antonio this week and the Infinity Falls water ride that will soak guests at SeaWorld Orlando next year -- are themed to SeaWorld's animal rescue efforts in a smart brand-polishing move.

SeaWorld Entertainment may not be investing as much money in its parks as Disney and Comcast are this year, but expectations are low enough and attendance levels are so depressed that it may not take much to nudge trends in the right direction.