"A part of all you earn is yours to keep. It should not be less than a tenth no matter how little you earn," George Clason counsels in the famed personal-finance fable The Richest Man in Babylon. And many financial advisors have encouraged clients to follow this advice. It may indeed help you eventually retire if you follow it early enough in life. But is this adage stopping short of a better solution?

What would happen if you were far more aggressive with the percentage of income you invested? For example, what might happen if you invested around 65% of your income? As it turns out, you could go from a net worth of zero to financially independent in just over 10 and a half years.

Now, I know what you're probably thinking: Who in the world can honestly save 65% of their income? Here's one person who has: Longmont, Colorado's Pete Adeney (more commonly known as Mr. Money Mustache). After starting from scratch in 1997 at 22 years old, Adeney and his wife avoided "lifestyle creep" (when spending rises in proportion to higher income), and proceeded to stash away a large portion of their dual incomes. By embracing frugality, they declared themselves retired in under 10 years -- just in time to devote attention to their newborn child. Mr. Money Mustache has since garnered a massive, cult-like following at his blog, where he dishes out early-retirement wisdom to his "Mustachian" readers. 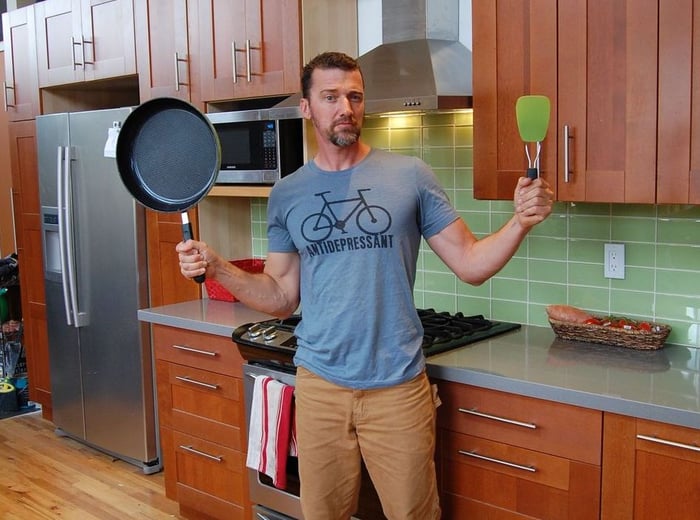 Pete Adeney (Mr. Money Mustache) in his customized kitchen, which he built himself. The "Mustachian way" favors do-it-yourself methods and problem-solving over consumerism when it comes to meeting perceived needs. Image source: Mr. Money Mustache.

It's all about the savings rate

But there's something deeper here than an unconventional couple's entertaining story of how they retired insanely early. Anyone thinking about achieving financial independence at some point (who isn't?) can uncover one of the most valuable principles of wealth-building in Adeney's story.

You may not be open to the idea of cutting expenses by riding your bike whenever possible, moving closer to work to eliminate long commutes, no longer borrowing money for cars, or taking other frugality measures to help you achieve an uncanny savings rate. Even so, here's one takeaway from Adeney's journey to financial independence that everyone should be interested in: a shift toward emphasizing your savings rate when it comes to retiring.

Mr. Money Mustache put this key principle into context for The Motley Fool:

There's really only one factor in how long your mandatory working career needs to be: your savings rate, as a percentage of your take-home pay. Higher income won't get you free any earlier, if you boost your spending every time you get a raise. So think of your savings rate as a "Personal Profit Margin," and maximize the amount of money you channel into low-cost index funds and eliminating debt if you have any. Changing this mindset can change your perspective on life and your career -- almost overnight.

Twenty years ago we began studying how people became wealthy. Initially, we did it just as you might imagine, by surveying people in so-called upscale neighborhoods across the country. In time, we discovered something odd. Many people who live in expensive homes and drive luxury cars do not actually have much wealth. Then we discovered something even odder: Many people who have a great deal of wealth do not even live in upscale neighborhoods.

That small insight changed our lives.

The self-made millionaires studied in the book primarily became wealthy simply by saving a meaningful portion of their income.

Here's another line from The Millionaire Next Door to convince you: "Being frugal is the cornerstone of wealth-building."

Visualizing the impact of your savings rate

How, exactly, does a higher savings rate translate to an earlier retirement?

Your savings rate is key not just because it means you're saving a higher percentage of your income, but also because it reflects the amount of money you can live on. This is the more important takeaway about an individual's savings rate. For instance, even though someone with take-home pay (gross income minus taxes) of $200,000 a year and a 50% savings rate is saving far more than someone with $60,000 of take-home pay and a 50% savings rate, both individuals will be ready to retire at the exact same time. This is because the $60,000 earner has structured their life to live on far less than the $200,000 earner.

In the following chart, the impact of the savings rate on how long it will take someone to become financially independent is clear. Assuming a 5% return on saved money after inflation, a 4% annual withdrawal rate after retirement, and a large enough portfolio for it to outlast withdrawals, here's how a savings rate would affect working years until retirement: Data for chart, rounded to the nearest year, is based on table in Mr. Money Mustache's blog. Chart by author.

Your savings rate has an unmistakable influence on your ability to become financially independent. Even by simply upping your savings rate from 10% to 20%, you could shave off over 14 years from your retirement timetable. Not bad at all -- and probably worth the effort.

Importantly, Mr. Money Mustache believes many earners can cut their expenses without reducing their happiness. Indeed, there are some activities that can both save money and make life more enjoyable, like riding a bike for short errands. And Adeney doesn't even urge readers to live in a shack or a tiny home. Bigger savings are achievable "ten bucks at a time," he says. Think: Use less electricity; eat out less during work hours; ditch cable TV; and have more discipline about random purchases like shoes, gadgets, or lawn care.

If you can internalize how integral your savings rate is to your ability to set money aside, invest it, and eventually become financially independent, this may be the catalyst you need to begin allocating capital with more discipline, ultimately helping you spend less and retire earlier. As Mr. Money Mustache says on his blog, "It's just basic math...."

If the math favors higher savings rates this much, the well-intentioned advice to pay yourself first with a tenth of your income is arguably doing you a disservice. Do yourself a favor and look for ways to get your savings rate even higher. You'll retire much earlier.

Want to Retire Early? Then Check Out This Chart @themotleyfool #stocks Next Article
Current