The global hotelier is reaping significant rewards from its merger with competitor Starwood Hotels.

Shares responded positively to Marriott's first-quarter 2017 earnings on May 8, and they trended up steadily through the rest of the month.

Both North American and worldwide revenue per available room (RevPAR) rose 3.1% during the first quarter on a systemwide, comparable basis.

The strengths of the combined companies are indeed formidable. Marriott now boasts 30 global brands across the luxury, "upper upscale," limited-service, and time-share segments. And new rooms in the organization's pipeline point to sizable growth potential: Compare the 430,000 rooms in development at the end of Q1 2017 with Marriott's pre-merger pipeline of 285,000.

Giving a sense of the scale of the combined entity, CEO Arne Sorenson underlined during Marriott's earnings conference call that one out of every three hotels in the U.S., and one out of every four hotels worldwide, is now associated with one of the merged company's brands. 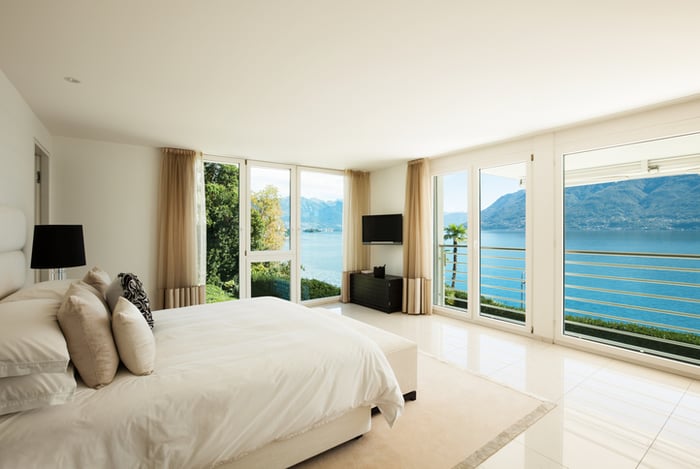 Marriott shares have taken a bit of a breather since May, dropping roughly 4% in the first two trading weeks of June. But some profit-taking is to be expected: Since the merger completion date of Sept. 23rd, shares have posted a torrid 55% total return to date.

Looking ahead, Marriott continues to project a solid 2017. Alongside its first-quarter earnings release, the hotelier updated its full-year 2017 outlook, which anticipates RevPAR growth of 1% to 3% worldwide, and gross room additions of 6% in 2017. The company also bumped up its full-year revenue range to a band of $3.225 billion to $3.295 billion. The top of this range would represent a 7.2% increase on prior-year combined revenue of $3.072 billion -- not a bad growth rate for the largest company in the industry.