Please ensure Javascript is enabled for purposes of website accessibility
Free Article Join Over 1 Million Premium Members And Get More In-Depth Stock Guidance and Research
By Anders Bylund - Jun 18, 2017 at 10:00AM

This rousing dividend story does not have a happy ending.

Dividend investors are well aware that Frontier Communications ( FTR ) offers one of the richest yields on the market today. In fact, Frontier's 12.6% dividend yield is the most generous payout among the members of the S&P 500 market index -- by a wide margin. Runner-up and fellow regional telecom CenturyLink's ( LUMN 0.45% ) yield stops at just 8%.

But bigger isn't always better. Extremely high dividend yields are often a sign of financial trouble. I'm afraid that Frontier falls in this category, and that its lofty dividend payouts are headed for an abrupt end. 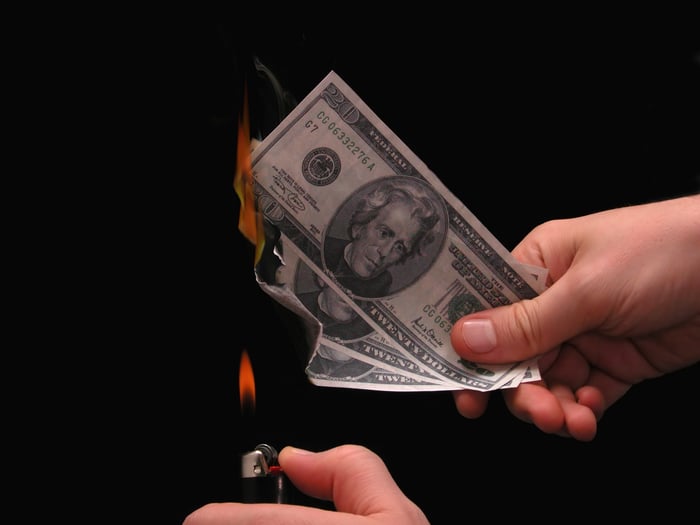 The dividend crash actually started long ago. Frontier's quarterly payouts stood at $0.25 per share between 2004 and 2010, when the dividend cuts started. At that level, the yield would have been roughly 75% today as Frontier's share prices marched downward over the years. It would also have amounted to an annual dividend budget of $1.2 billion -- more than four times last year's $265 million of free cash flows. That is not a sustainable policy by any leap of the imagination, so the company had no choice but to slow the payments down over the years.

The yield topped out at 35% in mid-May but crashed down as the effective date of the lowered dividend rolled around. So here we stand, with Frontier dividends yielding less than 13% on an annual basis. Management says that the cash is better used to pay down and refinance debt balances, so you shouldn't expect dividend boosts anytime soon. I would actually worry more about further cuts.

Frontier's buyouts of landline operations from Verizon Communications ( VZ 0.98% ) have reshaped the smaller company in many ways. Network assets tripled in the 2010 transaction covering Verizon landlines in 14 states, then nearly doubled again with the deal for operations in Texas, Florida, and California in 2015-2016. But Frontier's long-term debt balances followed a very similar path and now stand at a crushing total of $17.9 billion versus cash equivalents of just $341 million.

Meanwhile, Frontier's share count rose from 315 million to 1.2 billion stubs. A lot of Frontier's dividend payments are effectively going out to Verizon investors, so slashing the payments kind of lowers the long-term price of those transactions.

Together, these two effects have put a serious damper on Frontier's dividend policies. But wait, there's more.

The Verizon deals have indeed boosted Frontier's top-line revenue and EBITDA profits dramatically, but free cash flows have held steady. Again, higher share counts plus steady cash flows equals pressure on the company's dividend payments. Boosting the payouts under these circumstances would require more debt or additional share sales just to finance the dividend policy. Dividend cuts, on the other hand, make a ton of sense. 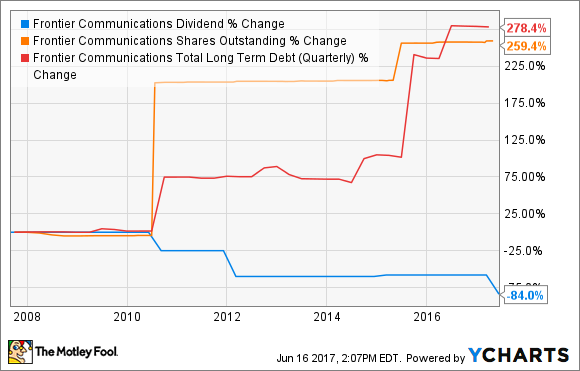 Generous dividends have failed to make up for Frontier's plunging share price. Investors buying into the Verizon promise in the summer of 2010 have seen their holdings shrink by 83% in seven years. The damage is limited to 67% if dividends were reinvested along the way, but it's still a strongly negative return. If you bought Frontier shares just before the Verizon agreement in February of 2015, the damage would be 81% in plain share price terms, or 76% when accounting for dividend effects.

Management keeps a stiff upper lip and is once again promising good things in the far future. I don't believe a word of that, and expect the dividend payments to keep falling in the years to come. This story does not have a happy ending.

Stay away from Frontier's extreme dividend yield. You can find much better dividend stocks for the long term elsewhere.