Kids dream of the slam dunk and inking a big deal with the NBA, but it’s the shoes that separate the players from the stars.

In 1891, Dr. James Naismith, a physical-education instructor working at the YMCA in Springfield, Mass., wanted a way to keep the youth active during the long, cold New England winters. His solution involved a soccer ball, 13 rules, and a peach basket suspended 10 feet high. Little did he know the legacy he would leave behind. Basketball is not only one of the most loved sports in the United States, but its popularity is also spreading around the globe.

The average player in the National Basketball Association (NBA) takes home a whopping $6.2 million average salary, more than twice that of their National Football League counterparts. Yet with all the money being paid out in salaries, an NBA player hasn't really hit the big time until he has a shoe deal. 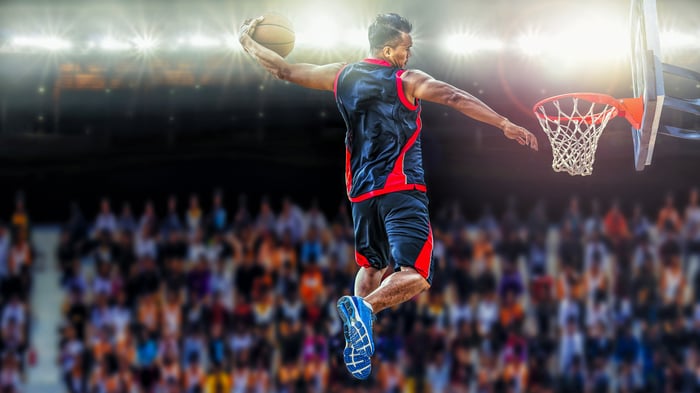 In the NBA, it's all about the shoes. Image source: Getty Images.

Michael Jordan is arguably the most iconic athlete who ever played the game. He retired for the last time in 2003, yet his enduring influence still reigns supreme. The current generation of superstars were inspired by him, and that legacy still pays dividends. Jordan earned an estimated $110 million in sponsorships last year from footwear and athletic apparel giant Nike (NKE), and for good reason. Nike's fiscal 2016 revenue hit $32 billion -- and Jordan's signature kicks, including the Retro and Air Jordan collections, accounted for nearly 9% of those sales.

December saw the 20th anniversary of the film Space Jam, the 1996 comedy that starred Jordan and the Looney Tunes gang and introduced the shoes of the same name. The Space Jam 11 shoe that was released to commemorate the occasion was "the largest and most successful shoe launch in the history of Nike," according to Nike President Trevor Edwards. 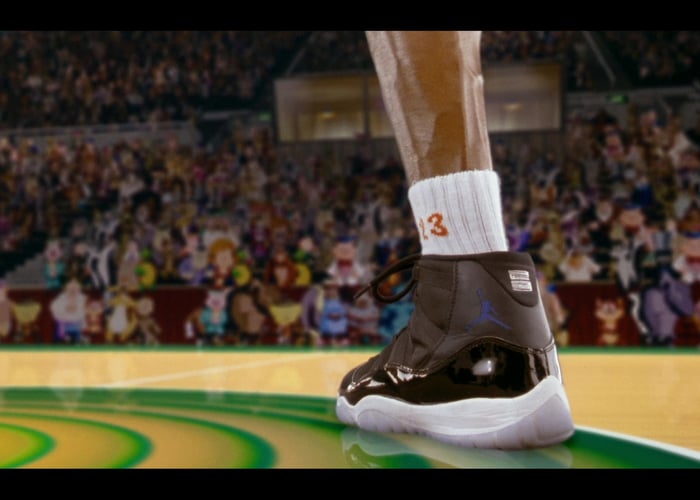 The Space Jam 11 was the most successful shoe launch in Nike history. Image source: Nike.

Jordan is by far the biggest roundball legend banking big bucks on shoes, but he's far from the only one.

During the recently completed postseason, LeBron James showed why he's one of the most respected elder statesmen in the sport. Having surpassed Jordan to become the all-time playoff scorer last month, James added a little more shimmer to his stature by passing his childhood hero on the all-time NBA Finals scoring list as well, moving into the No. 3 spot, while also breaking his record for the most career free throws made in the playoffs.

Last year, "King" James signed what is believed to be the biggest endorsement deal in history, in a first-ever lifetime contract with Nike that could be worth as much as $1 billion. The company sells an estimated $300 million in LeBron James-branded shoes per year, and James took home an estimated $32 million last year. 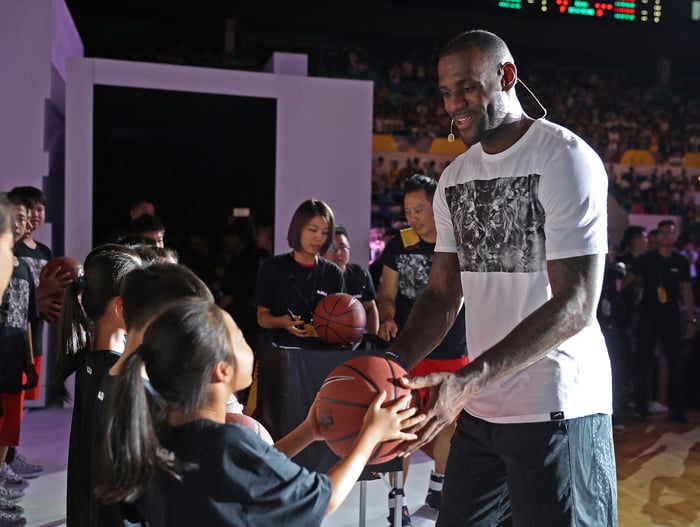 LeBron James has the first ever lifetime contract with Nike. Image source: Nike.

For the year ended Mar. 2017, as measured by dollar volume, Nike sold more signature shoes from James and his teammate Kyrie Irving than of any other active NBA players, according to data from the NPD Group. During the company's most recent earnings call, Edwards also pointed out that the Kyrie 3, which made its debut in December, was "the top-selling performance basketball shoe in the marketplace."

Rounding out the top five

Beyond James and Irving, several other athletes currently on the roster have made notable additions to their bank accounts as the result of immense shoe deals. Golden State Warriors star and newly minted Finals MVP Kevin Durant picked up an estimated $25 million last year as part of a 10-year deal with Nike that could pay out as much as $300 million.

James Harden of the Houston Rockets bucked the Nike trend and inked a deal with Adidas (ADDYY 1.10%) in Aug. 2015 and pocketed about $14 million last year, in another huge deal that could pay as much as $200 million. Hot off an NBA championship with the Warriors, Stephen Curry will see a big NBA payday for his effort, which he can add to the estimated $12 million he gets from Under Armour (UA 2.49%) (UAA 2.95%). 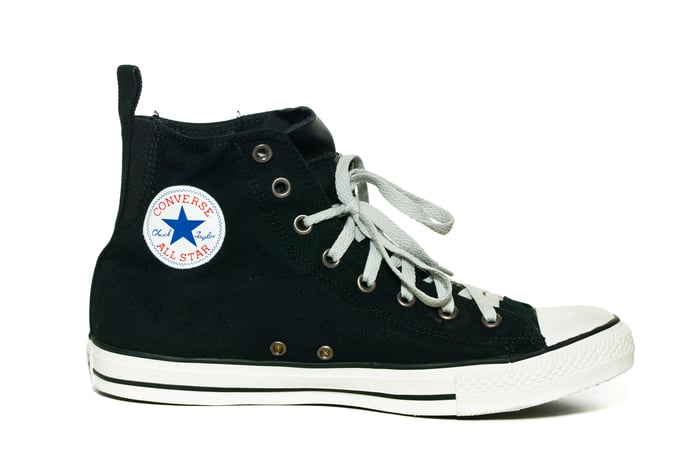 Chuck Taylor's signature Converse All Star shoes made him one of the first endorsed athletes in the world. Image source: Getty Images.

The Converse Rubber Shoe Company created the Converse "All Star" in 1917 -- its first shoe designed specifically for basketball, though the sponsorship didn't come until several years later. Charles Hollis "Chuck" Taylor, an All-American, played basketball in 1921 for the Akron Firestones, a team that would later become the Boston Celtics. The Firestones were one of the founding NBA teams, though the league didn't form until 1937.

Taylor loved the shoes and worked with Converse to improve the design further by adding support in the ankles and creating increased traction from the outsoles. For his work in helping improve the shoes, Taylor is credited with having the first signature shoe deal way back in 1923 and was "one of the first endorsed athletes in the world," according to Converse. Nike would end up acquiring Converse in 2003.