The busy summer movie season is under way, and the stocks of the country's three biggest theater chains -- AMC Entertainment (NYSE:AMC), Regal Entertainment (NYSE: RGC), and Cinemark Holdings (NYSE:CNK) -- kicked it off in a disappointing way. The culprit? Slowing growth expectations and a so far lackluster performance at the box office.

There has been no shortage of potential blockbuster releases so far this year. However, until the early June release of Warner Brother's Wonder Woman, ticket sales were disappointing thanks to a few box office bombs. After some female heroics on- and off-screen -- Wonder Woman has shattered records for a movie directed by a woman with a better-than-$100-million opening weekend -- total ticket sales are now up slightly year to date and flat for the summer movie season. Prior to the Princess of the Amazons hitting the big screen, ticket sales were off some 10% compared to last summer at this time.

To be fair, 2016 was going to be tough to top, with multiple superhero movies and movie theaters reaping the rewards of higher average ticket prices, secured by offering higher-value through reclining seating and high-definition and 3D screens.

Nevertheless, the slight slowdown depressed the stock prices for AMC, Regal Entertainment, and Cinemark as investors worried that the growth catalysts from the last few years are starting to taper off. 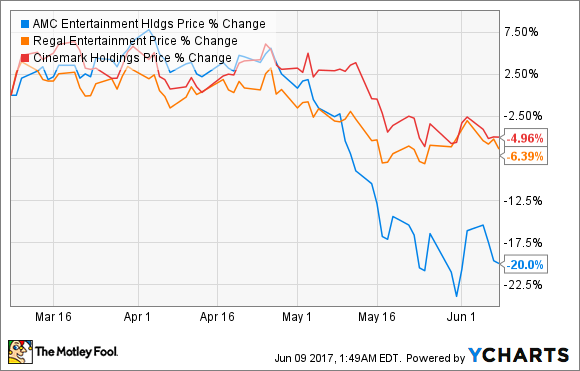 A preview of coming attractions

Investors may not need to fret, though, as some of the year's biggest releases are weighted toward the second half. Disney looks like it could dominate sales again with Thor: Ragnarok and a joint venture with Sony in Spiderman: Homecoming. And there is another Star Wars movie in December. The last two have a combined domestic gross box office total of nearly $1.5 billion.

Also on the docket for later in the year is more superhero action with Justice League, and a couple of big reboots/sequels in The Mummy and War For the Planet of the Apes.

Besides ticket price and sales increases, theater stocks are also betting on expanding concession sales to help boost growth. AMC is rolling out adult beverages at its locations, now available at about a third of all its theaters through the subsidiary MacGuffin's bar, as well as expanding food and drink options. Regal and Cinemark have also embraced concessions outside of the mainstay popcorn and soda to include primarily other junk food items like pizza and burgers.

Offering meals as part of the moviegoing experience seems like a no-brainer, but the theater business is finally catching on. Average concession sales are very low, though, so that area of the business could be a significant area of growth in the years ahead as the three big chains dial in on a strategy.

With a strong movie lineup for the balance of 2017 on the way, and new lines of revenue in food and drink still being explored, the dip in theater stocks looks like nothing to worry about. AMC in particular, down over 20% in the last few months, looks particularly intriguing.

The company just finalized two acquisitions at the end of last year and is completing a third one that will expand operations to Europe. When finished, AMC will be the world's largest theater operator, with locations in 15 countries.

In the meantime, though, the company is working through expenses related to the buyouts as well as a new share offering to help fund them. That helps explain the steeper drop in share price compared with Regal and Cinemark. The decline also bumped the dividend yield up to 3.3%, a nice bonus for shareholders betting the chain can capitalize on its new acquisitions. The big-screen business may be old, but there is still untapped potential there, which makes it worth investors' consideration.