Imagine whipping around the corner at a high rate of speed, your head pulled to one side, hanging on for dear life. Then comes a slow climb, and peering over the top, you get just a glimpse of the steep declines to come. As you begin to plummet, your heart jumps into your throat, and you take another sharp bend before lurching to a halt -- and the ride is over.

That might sound like an epic roller-coaster experience, but it also describes the harrowing ride that early investors in Euro Disney have endured. That ride came to an end this week, when majority owner The Walt Disney Company (NYSE:DIS) gained control of the 97% of shares necessary to force a mandatory buyout and subsequently delist the company from the French stock market. This marks the end of a dark chapter for the troubled theme park, which was later renamed Disneyland Paris.

Early investors paid $13.50 for shares when the venture was announced in 1989, and they climbed to $30 by the time the park opened three years later, in anticipation of the success that was sure to follow. Shares have languished in the quarter-century since, and Disney finally bought out the remaining investors at roughly $2.13 per share. 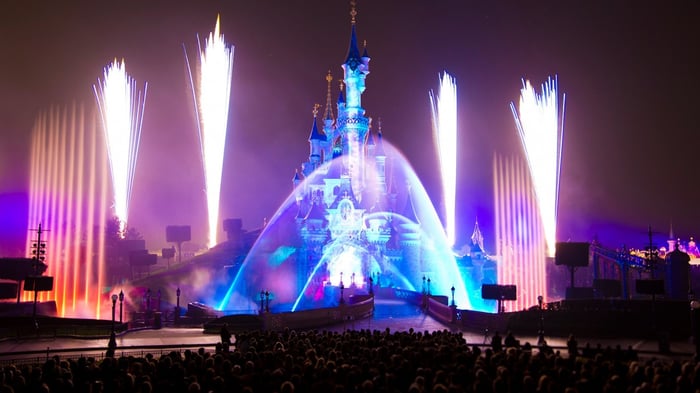 The park is located in Marne-la-Vallee, a suburb 19 miles east of Paris, and it's been a thorn in Disney's side over the years. Almost since it opened in the midst of a recession in April 1992, Disneyland Paris has been the black sheep of the company's empire of parks and resorts. Expectations were for crushing opening-day crowds of 500,000, but the subsequent reality was much more stark: only an estimated 25,000 attended.

In Disney's 1993 annual report, then-Chairman Michael Eisner called the park's performance "dreadful" and gave it a letter grade of "D."

When the park opened in 1992, Disney owned 49% of the venture, and the project was plagued almost from the outset by cultural missteps and unrealistic expectations.

Incorrect assumptions concerning the number of visitors, the cost of labor, and a failure to appreciate just how much Europeans love wine -- which was initially banned in the park -- contributed to year after year of losses. Following decades of mismanagement and multiple bailouts to stave off bankruptcy, Disney has finally taken control of its Parisian stepchild and has initiated procedures to restructure the debt.

More recent difficulties at the Parisian theme park are not entirely of its own making, however. A decline in tourism and an increase in security costs came in the wake of terrorist attacks in and around Paris in late 2015, which has weighed on attendance, as visitors have vacationed elsewhere. The waning crowds made an already bad situation worse. 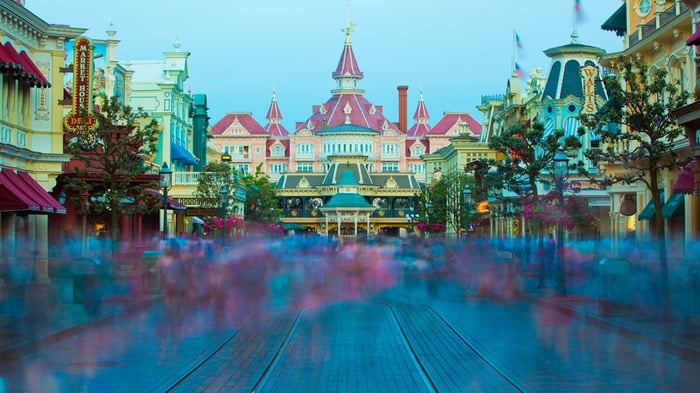 Still, there are indications that Disney will be able to bring the prodigal park back into the financial fold. Under Disney ownership, the park will no longer pay royalties and management fees, which totaled 7% of revenue, that it contractually paid to Disney in prior years. This amounted to nearly $1 billion over the past decade, and some said it contributed to the park's decline. Disney recently announced plans to spend $1.6 billion to fund upgrades and improvements for its estranged kin.

Attendance at the park also inspires confidence concerning the potential for success. Disneyland Paris is Europe's biggest tourist destination and hosts more visitors each year than the Eiffel Tower and the Louvre combined. Under Disney's mentorship, it may be able to parlay those numbers into profits.

Mickey will be proud

Let's face it: When it comes to running a theme park, no company has a better track record than the House of Mouse. In its most recent quarter, Disney's revenue grew 3% year over year to $13.3 billion, with its parks and resorts segment contributing $4.3 billion, a 9% increase over the prior-year quarter and amounting to 32% of total revenue.

Disneyland Paris has had a checkered history, and it will probably be some time before it reaches the level of success Disney's other parks and resorts enjoy. Still, with the company's vast resources and full control of the undertaking, I expect that before long, the outpost in Paris will reflect the magic of Disney.