The Centers for Disease Control hopes so, but companies like Altria and Reynolds American disagree.

The long-term trend for smoking in the U.S. has been downward, leading to a dramatic decline in the number of smokers over the decades. That has forced tobacco companies like Altria (MO 0.11%) and Reynolds American (RAI) to use their pricing power to keep revenue and profits higher despite falling sales volumes, and attempts to innovate through products like electronic cigarettes and heated-tobacco products have aimed at catering to changing consumer preferences.

Yet the most recent report from the Centers for Disease Control and Prevention and the U.S. Food and Drug Administration's Center for Tobacco Products found that one source of demand for tobacco-related products has been on the decline lately. The CDC and FDA released their annual National Youth Tobacco Survey earlier this month, and although the agencies still believe too many young people are using tobacco products, the numbers show dramatic declines from year-ago levels. Although Altria and Reynolds American are both clear about their intent to serve only adult tobacco customers, the decline in youth use could lead to reduced interest among the current generation once they reach young adulthood. 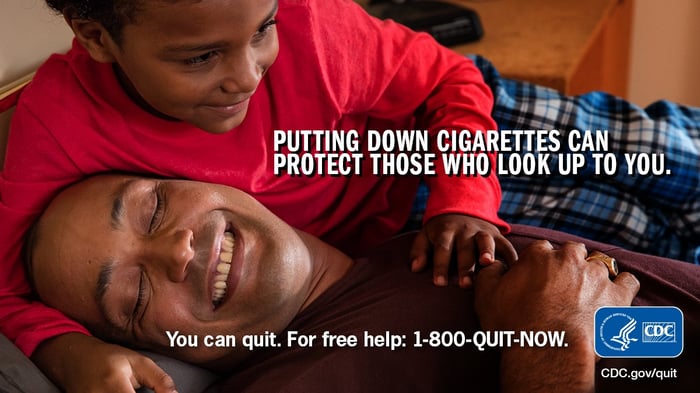 What the survey said

The CDC/FDA study results showed substantial declines on a number of key metrics. The number of middle and high school students who said they have used a tobacco product in the past 30 days dropped to 3.9 million in 2016, down by about 800,000 from year-earlier levels. Cigarette use dropped by 200,000 to 1.43 million, continuing a long trend over the past several years.

Perhaps the most interesting result from the study had to do with electronic cigarettes. In past years, drops in traditional cigarette smoking were accompanied by increases in use of e-cigarettes, which the CDC and FDA found troubling. However, in 2016, that countertrend abruptly reversed itself. The number of American youth using electronic cigarettes fell dramatically, from 3.01 million in 2015 to just 2.18 million last year.

The report's results add ammunition to the debate about the long-term viability of the electronic cigarette industry. Since its inception, those who favor e-cigarettes have believed they could be the beginning of a revolution in the industry, with the potential to allow consumers to use the products with reduced risks of health-related harm. Skeptics have instead believed that the e-cigarette trend was a passing craze that would eventually burn itself out. Based on one year of data, the evidence suggests that the latter might be true, at least among youth.

Altria and Reynolds American have made their positions with respect to youth smoking quite clear. For instance, at a conference last year, CEO Marty Barrington said unequivocally, "Kids should not smoke or use any tobacco products. Our companies continue to invest in positive youth development programs to help young people build self-confidence, make healthy decisions, and resist risky behaviors, including tobacco use." Reynolds American CEO Debra Crew has made similar comments, noting that Reynolds is "leading the charge on many controversial issues, such as reducing the harm caused by smoking and accelerating the decline in youth smoking."

The unanswered question from the CDC/FDA survey is whether reduced youth smoking will result in reduced young-adult smoking, even when the current generation of kids reach legal smoking age. If so, then the latest numbers could indicate an ongoing adverse trend for cigarette volume going forward. And perhaps more importantly, falling interest in electronic cigarettes could mean the massive investments that Altria and Reynolds American have made in e-cigarettes and other reduced-risk products might not provide the long-term growth potential investors have hoped to see.