Consumer electronics retailer Best Buy (NYSE:BBY) is thriving. The company has grown its domestic comparable sales for three years in a row, and margins have been steadily expanding. Adjusted earnings jumped to $3.56 last year, up 28%. The balance sheet has been strengthened, with enough cash to fund a rising dividend as well as a $3 billion share buyback program.

A combination of cost-cutting, increased price competitiveness, and investments in both e-commerce and the stores have driven these results. As part of its Renew Blue initiative, Best Buy has removed $1.35 billion in costs over the past few years. Despite implementing a price-matching policy, gross margin has expanded in each of the past two years. Online sales are growing by more than 20% annually.

Much of the low-hanging fruit for Best Buy has likely been picked. Margins can only expand so much, given the competitiveness of selling TVs and phones, and much of the excess fat that weighed Best Buy down prior to its turnaround has already been removed. But Best Buy sees three growth opportunities ahead that could continue to drive earnings higher.

Best Buy has taken some important steps over the past few years to jump-start its online business, which had been largely an afterthought prior to the turnaround. The company redesigned its website in 2013, modernizing it and adding more product reviews and buying guides. It implemented a new rewards program and a price-matching policy both in-store and online. It began shipping some online orders directly from stores, increasing product availability online while cutting down on shipping times.

The results speak for themselves. Domestic online sales grew by more than 20% last year, helping to drive comparable-sales growth. During the holiday quarter, domestic online revenue of $2.3 billion accounted for 18.6% of total domestic sales. The stores help power the online business, with ship-from-store as well as in-store pickup of online orders contributing to this growth.

Best Buy is vague about its plan to continue growing its online business. In CEO Hubert Joly's letter to shareholders, he outlines a few steps the company will pursue: "We plan to continue to enhance the customer experience and increase revenue by growing both existing and new channels, by growing certain key product categories, as well as by developing broader, stickier customer relationships."

Product categories that offer growth potential going forward include smart home devices and appliances, and Best Buy believes that it can continue winning market share in both areas. The company will need to maintain its double-digit online growth rate in order to keep up with Amazon.

Best Buy has long offered services through its Geek Squad business, but the company now sees an opportunity to expand its service offerings. Best Buy wants to solve problems for its customers regardless of where those customers bought their products. The company plans to expand both its in-home advisor program as well as its home security and automation service. 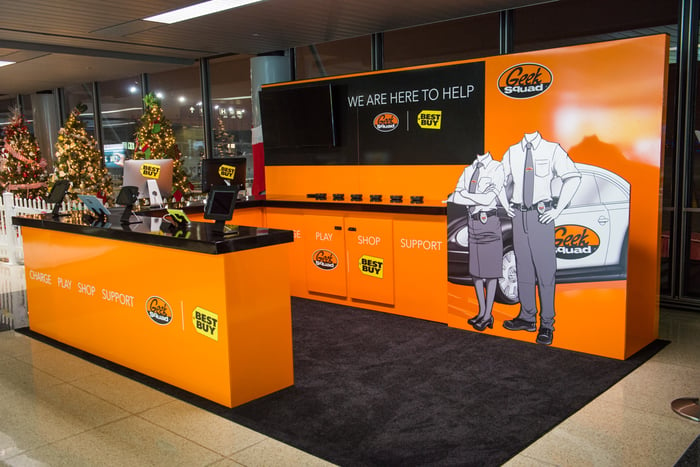 Services around home security and smart devices could be a major opportunity. Best Buy wants to not only sell the security cameras and other gadgets, but also sell security monitoring and home automation services. This will help create stickier customer relationships, which will feed back into the first pillar of its growth plan.

Technology is only getting more complicated. The average consumer may not be able to successfully set up a wireless network, let alone a bunch of smart home devices and security cameras. Best Buy can solve those problems for its customers, generating service revenue that will likely carry a higher margin than the products themselves.

Best Buy has spent the past few years exiting major international markets. The company sold its stake in its European joint venture in 2013 for $775 million, and it announced its exit from China in 2014 with the sale of its Five Star business.

The U.S. is now the main focus, with the international business comprised of only Canada and Mexico. The international business generated just $3.16 billion of revenue during fiscal 2017, about 8% of Best Buy's total revenue. These markets were profitable last year, with a non-GAAP operating margin of 3.2%. But that's well below the 4.6% margin earned by the U.S. segment.

E-commerce, store remodels in Canada, and new store openings in Mexico are expected to drive international growth for Best Buy over the next few years. Given the size of the international business, the impact from this growth will be small. But Best Buy likely sees these markets as long-term opportunities.