Oil prices have plunged in the past few months. Whereas the cost of Brent crude oil had rebounded to around $55 per barrel during the first two months of 2017, it fell to just $44 per barrel as of Tuesday, and declined further on Wednesday.

Not surprisingly, this decline in crude oil prices has pulled jet fuel prices lower. That's great news for airlines: Particularly airlines that have big growth plans for the second half of 2017 and beyond, such as Alaska Air (ALK 2.35%), JetBlue Airways (JBLU 1.91%), and Spirit Airlines (SAVE 0.66%). However, investors haven't paid much attention. Shares of all three airlines are quite cheap relative to their growth prospects. Fuel prices have fallen -- and may stay low

However, oil prices and jet fuel prices started to rebound last spring, creating easier comparisons. Furthermore, stubbornly high oil inventories in the U.S and rising domestic production have caused prices to plunge since April. The price of benchmark Gulf Coast jet fuel averaged about $1.50 per gallon in the first four months of the year, but has plunged to less than $1.30 per gallon now.

In fact, jet fuel prices are currently down on a year-over-year basis. Furthermore, the rapidly rising domestic oil rig count indicates that supply will continue to increase, keeping a lid on oil prices for the foreseeable future. 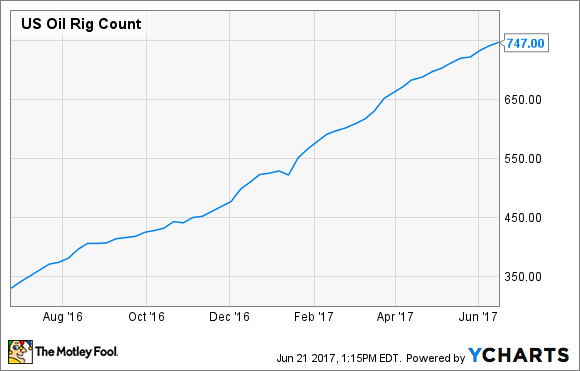 Lower jet fuel prices will help all airlines. However, faster-growing airlines should benefit the most, because with lower fuel prices, they can offer lower fares to stimulate new demand without compromising their margins.

Spirit Airlines has been one of the fastest-growing airlines in the U.S. recently. Alaska Air and JetBlue Airways have also consistently grown faster than the industry average. However, all three slowed their capacity growth in the first half of 2017. To some extent, this was an attempt to stabilize unit revenue, but the timing of aircraft deliveries during the year also played a major role. Spirit, Alaska, and JetBlue will all return to faster capacity growth.

Spirit Airlines has increased its capacity by about 15% in the first half of 2017, compared to planned growth of about 17% for the full year. Furthermore, 15% is the very low end of its medium-term target of 15% to 18.5% annual capacity growth.

Meanwhile, Alaska Air is on track for modest capacity growth of about 5.5% in the first half of the year. Growth is set to accelerate to 9% in Q3 and 14% in Q4, as Alaska Air expands its regional operations and starts to grow in the San Francisco Bay Area, home to its Virgin America subsidiary. Capacity growth will probably remain high in the first half of 2018, moderating thereafter.

Finally, JetBlue has increased its capacity about 4% year to date, but it plans to boost full-year capacity by 5.5% to 7.5%, implying a big uptick in growth in the second half of 2017. JetBlue will add 10 new A321s to its fleet in the next two quarters, compared to five in the first half of the year. This will keep its growth rate high entering 2018.

Time to buy these airline stocks?

Airline investors have been trained to fear growth, due to the industry's history of periodic overexpansion. This disdain is evident in the 2017 share price performances of Spirit Airlines, Alaska Air, and JetBlue Airways. Alaska has given back nearly all of its gains from earlier in the year, while JetBlue stock is roughly flat year to date and Spirit Airlines shares have fallen more than 8%. 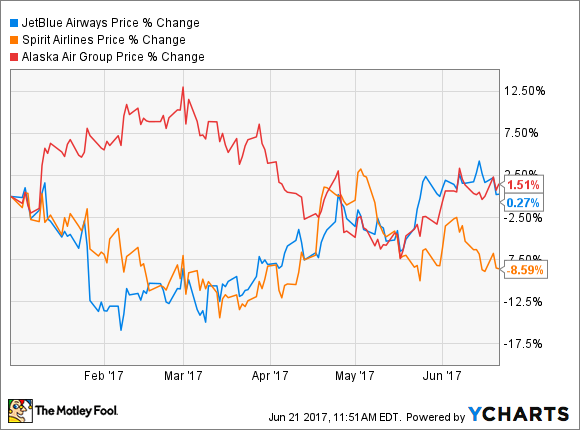 However, the massive long-term success of Southwest Airlines highlights the potential of airlines that offer a good value proposition and expand steadily. Capacity growth may lead to weaker unit revenue performance in the short run, but it can still drive strong earnings growth in the long run.

Right now, shares of Spirit, Alaska, and JetBlue all trade for 10 to 11 times forward earnings. Moreover, analysts' 2017 and 2018 earnings estimates have barely budged despite the big decline in fuel prices since mid-April.

The time is ripe for a return to faster capacity growth in the airline industry. As a shareholder of Spirit Airlines, Alaska Air, and JetBlue, I expect all three carriers to profit from the combination of low fuel prices and faster growth.