Why is this fiber optic stock underperforming its industry peers?

The bull thesis for the fiber optic market is fueled by service providers upgrading their infrastructure to address rising data usage from streaming media, cloud platforms, app virtualization, and other services. But there are many types of fiber optic companies, with some faring much better than others over the past year.

For example, optical components maker Oclaro rallied 90% over the past 12 months, while Infinera (INFN -0.53%), which provides optical transmission systems to service providers, dipped 5%. Let's examine Infinera's core business to understand why it underperformed many of its industry peers. 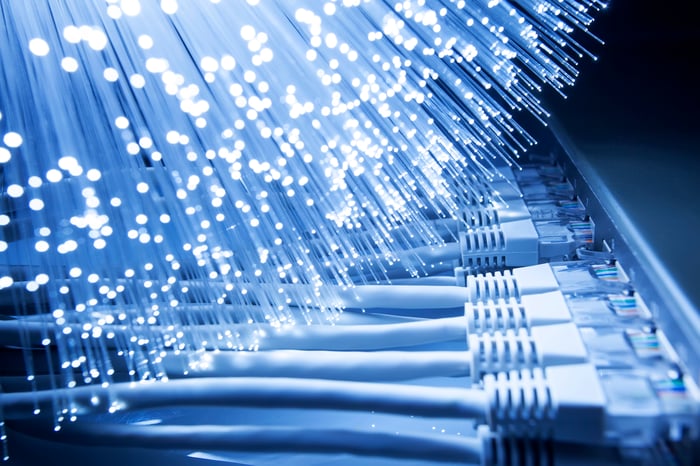 How does Infinera make money?

Infinera's core business provides long-haul wave division multiplexing (WDM) and subsea optical transmission systems for telecom companies. These systems enable telcos to expand the capacity of their networks over long distances without laying down more fiber. This is accomplished by "multiplexing" (or sharing) a larger number of optical signals on a single fiber by using different wavelengths of laser light.

Infinera has also been expanding into the shorter range data center interconnect (DCI) and metro markets. DCI systems link data centers to each other, while metro WDM systems boost network capacity across smaller urban areas. Infinera discloses exactly how much revenue comes from each division, but the lion's share still comes from the long-haul WDM business.

57% of Infinera's revenue came from domestic customers last quarter, while the remaining 43% came from overseas markets. Infinera's long list of customers includes Facebook, CenturyLink, and Telefonica -- with a single unnamed customer accounting for 19% of its top line quarter.

What challenges does Infinera face?

Infinera's biggest challenge over the past year was sluggish demand for long-haul WDM systems. This was mainly caused by telecom companies prioritizing shorter-range connections and the expansion of their digital ecosystems over longer-range connections. But looking ahead, Infinera believes that its long-haul WDM business will "return to growth in the second half of 2017" on sales of its newer XT-series products.

Infinera is trying to offset its long-haul slowdown by expanding its newer DCI and metro businesses, but revenue at both businesses fell sequentially last quarter (due to a traditionally weak first quarter). Those businesses also face stiff competition from newer rivals in the space like Acacia -- which also serves the long-haul, Metro, and DCI markets with smaller, denser, and more power-efficient 400G chipsets.

Ciena, which reportedly provides DCI systems to Amazon, could also put a lot of pressure on Infinera with its superior scale. Ciena applied pressure on Acacia (Amazon was using products from Acacia's top customer ADVA before the switch), so Infinera could be next. Huawei could do the same thing in China -- which would definitely hurt Infinera's overseas growth.

Should you buy Infinera today?

Due to these challenges, Infinera's revenue dipped 2% in 2016, and analysts anticipate another 11% decline this year. Its earnings plunged 56% last year, and it's expected to post a net loss this year. Those numbers look bleak, but Wall Street expects its growth to rebound in 2018 as cyclical demand for long-haul WDM systems warms up.

It's tough to properly value Infinera today, since its trailing and forward P/E ratios are both negative. But if Infinera's growth accelerates in the second half of 2017 and throughout 2018, this underperforming stock might finally catch up to its hotter peers across the fiber optic market.

Why Infinera Investors Should Ignore the Short-Term Noise
405%