The market for growth is huge, but here's why I find the company more fragile than many think.

Sometimes, a company -- and its stock -- can do no wrong. Such is the case with graphics-chip maker NVIDIA (NVDA -2.81%), which has seen its shares advance an astounding 500% since last February alone.

Far from feeling like they've missed the boat on this one, lots of smart investors -- including some Motley Fool services -- believe that the growth is just getting started. And why shouldn't they? The company that invented the graphics processing unit (GPU) has huge opportunities not just in gaming, but in self-driving cars and other forms of artificial intelligence. 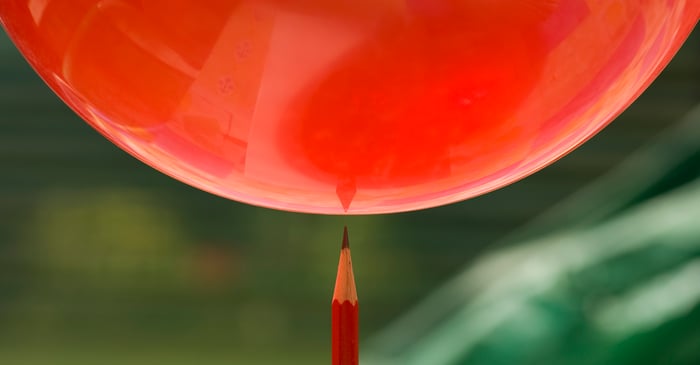 Is this stock about to pop? Image source: Getty Images.

But don't count me among those clamoring to buy shares. While I'll readily admit that the stock could end up being a huge winner, it has two characteristics that I believe make it fragile, and riskier than it appears.

There's nothing more insidious to long-term investors than commoditization. Last September I wrote an article detailing how this works:

[Imagine] you live in a world where apples don't exist. Then, somehow, you're able to start growing them. People love them; they can't get enough of them, and they're willing to pay upwards of $100 per pound for them!

Then, someone else suddenly figures out how to grow a slightly different apple. All of a sudden, your customers are only willing to pay $50 per pound. Before long, others have developed their own apples, and they offer them for less. The most you can get for your apples now is $5 per pound. In the blink of an eye, your volume of apple sales has remained the same, but revenue [has] dropped 95%. That's commoditization.

While it's obviously an oversimplification, if you substitute "GPUs" for "apples," you get an idea for what I'm worried about. NVIDIA obviously has the upper hand right now: As a founder-led company that created the entire niche for GPUs, it has more experience and know-how than any other player out there. That's why its business has done so well recently.

But how long can it continue to have an edge? I don't have an answer for that, but here's what I do know: End users don't give a hoot what GPU is inside their device -- they just care that it works and is affordable. The brand loyalty lies with the company actually selling the device to them -- such as Apple.

Manufacturers don't have any particular affinity to NVIDIA, either: If another company, be it Intel, Alphabet, Microsoft, or AMD -- all of which are working on competing technologies -- offers a "good enough" solution for less, it'll be the favored provider.

At the whim of a big customer

The other problem I have with NVIDIA is that it relies on one major customer for over 10% of its total sales. According to the company's 2016 annual report, revenue from this unidentified customer accounted for 11% of sales in 2014 and 2015, bumping up to 12% last year.

This isn't that uncommon with major chipmakers, and NVIDIA is far from the worst offender when it comes to this dynamic, but that fact gives me pause nonetheless. Should this customer decide to partner with someone else, it could create a huge hole in sales almost overnight.

I could be very wrong

Let me be perfectly clear: I think that NVIDIA is fragile because of its tenuous moat and customer concentration -- not that it is overvalued or destined to fall. Some fragile things never break.

Indeed, if you go back to the earlier article I wrote about commoditization, the three Internet of Things companies I singled out have produced average returns of 74% in just nine months. You would have been much better off not listening to me.

That being said, I stand by my reasoning, and as a long-term, buy-to-hold investor, I'll be staying away from NVIDIA.