If you're done with school and have some cash to put to work, look at these three solid businesses.

If there's one thing most recent college graduates can appreciate, it's buying something for less than it's worth. Incidentally, applying that practice to the stock market is one of the best ways to predictably generate wealth over the long term.

But finding the best value stocks our market has to offer is easier said than done. To help get you started, we asked three top Motley Fool contributors to each pick a value stock they believe recent college graduates would be wise to consider purchasing. Read on to learn why they chose Disney (DIS -2.21%), Nucor (NUE -0.03%), and Ryder System (R -0.02%). 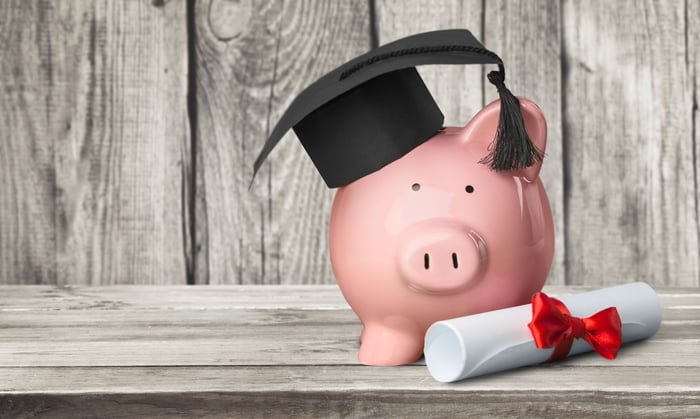 Steve Symington (Disney): Just because you've graduated from college doesn't mean you're too old for Disney's wares. In fact, it's no mystery the "House of Mouse" has grown to encompass so much more than its kid-centric roots. Disney continues to benefit from not only movies, consumer products, and theme parks under its namesake brand, but also revenue and profits derived from its acquisitions of Pixar in 2006, Marvel in 2009, and Lucasfilm in 2012.

Of course, the primary concern among Disney investors today revolves around the effects of cord-cutting on ESPN (of which Disney holds an 80% stake) and other cable channels including 100%-owned ABC and its 50% stake in A&E Networks.

But even then, Disney's consolidated results show the overall company is still humming along nicely. Revenue last quarter climbed a modest 3% year over year to $13.34 billion, while net income increased 11% to $2.39 billion and earnings per diluted share jumped 15% to $1.50. Disney credited the strong performances of its Studio and Parks and Resorts segments for helping to prop up its media networks business as it navigates today's changing entertainment landscape.

Finally, keep in mind Disney aims to return at least 20% of cash generated by the company to shareholders -- a promise it has fulfilled during the first two-quarters of its current fiscal year through a combination of its healthy dividend (which yields 1.5% annually as of this writing) and repurchasing $3.5 billion in shares.

With Disney stock currently trading at a reasonable 15.4 times this year's expected earnings, I think recent college graduates -- or any long-term investors, for that matter -- would do well to consider adding it to their portfolios.

The best steelmaker is on sale

Jason Hall (Nucor Corporation): Few steelmakers are even worth considering owning for the long-term. The industry is viciously cyclical, and most steelmakers see their profits and losses swing wildly as the cycle changes, a pattern that can lead to big losses for investors.

And while shares of Nucor are still down from the pre-Great Recession peak, the company is incredibly strong, and at recent prices, trades at a pretty sharp discount to fair value in my book -- at a price-to-earnings of 16. For recent college graduates, who can measure their investing timeline in decades, that puts Nucor at the top of my list of value stocks for young investors.

In short, Nucor's advantages with its operating model, based on mini-mills that give it serious scalability that other steelmakers lack, has allowed the company to generate steady positive cash flows across every part of the steel cycle. And this strength means that Nucor has been able to aggressively expand through both acquisitions and capacity expansions through downturns. The company's most-recent results show how strong its operations are, with its best profits in nearly a decade, while many of its peers continue to struggle.

It has also allowed the company to maintain the strongest balance sheet in the industry by far, with $1.7 billion in cash and $4.4 billion in very low-cost long-term debt.

Now's a wonderful time to buy Nucor, with shares trading at 16 times trailing earnings. Looking years ahead, Nucor is likely to be able to continue growing those earnings, too.

Modern movers for the upcoming movers and shakers of the world

Chuck Saletta (Ryder System): As a recent college graduate, mobility is likely very important to you. If you have to move for your job, or if your job involves moving things around, you'll likely need some sort of logistics service.

Ryder System (R -0.02%) is a leader in moving things from point A to point B. As importantly from your perspective as a prospective investor, it's also very good at helping other companies move things around.

Transportation is a notoriously low-margin business, where even the most successful businesses struggle to maintain strong profitability over long periods of time. What Ryder System has done differently is diversify into adjacent businesses, like fleet maintenance, integrated logistics, and transportation management services. Those adjacencies allow it to earn money on other transportation companies' businesses, enabling Ryder to better manage the volatility and cyclicality in the industry.

That is a big part of how Ryder System has been able to survive and thrive since its 1933 founding, in spite of being part of that rough and tumble industry. Despite its sustained operational success, its shares are still priced in the market based on being part of the low margin, highly cyclical transportation industry, trading at about 14-times trailing and 13-times expected forward earnings. That makes it a solid relative value in a market where the overall S&P 500 trades at around 26 times trailing earnings.