OK, to be fair, spirits giant Diageo plc (NYSE:DEO) is actually only paying $700 million for Casamigos, a tequila company owned by none other than actor George Clooney and two of his friends. The other $300 million represents potential earn-outs over the next 10 years based on the achievement of performance milestones. But still, even the base consideration is quite a haul for a very new -- and very small -- craft tequila maker. 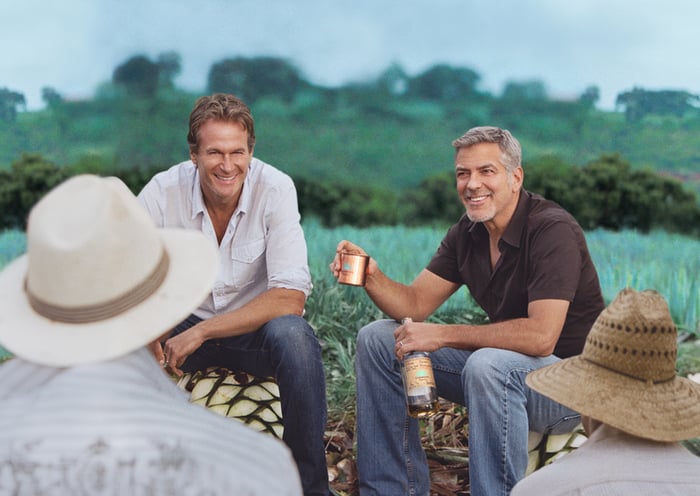 Why would Diageo pay what seems to be a vast sum in exchange for the minuscule number of cases moved so far? Sales growth provides at least part of the answer. Per the company, Casamigos' volume has improved at a compounded annual growth rate (CAGR) of 54% over the last two years. Inevitably, this rate will slow, but it does point to the brand's potential to win market share.

Moreover, tequila is heating up among more traditional alternatives in the spirits category. The tequila market in the U.S. is projected to expand at a CAGR of nearly 4% through 2020. While this may not seem like a blistering rate, consider that brands which can grow at a faster pace than the tequila sector will post CAGRs in the mid- to high-single digits. That constitutes pretty attractive growth in the overall alcoholic beverage industry.

Tactically, the purchase helps Diageo populate the brand layer positioned below "ultra-premium" spirits (such as its Johnnie Walker and Crown Royal labels): its fast-growing "super-premium" beverages.

It's also indicative of growing consumer interest in the tequila market, which shows a lot promise for long-term global expansion. Diageo purchased the ultra-premium Tequila Don Julio in 2015, and this latest deal seems to reinforce its intent to participate in a beverage sector increasingly popular among millennials.

Purchasing and scaling a rapidly growing brand through a massive distribution system like Diageo's is an increasingly common play among a handful of beer, wine, and spirits companies.

Constellation Brands (NYSE:STZ) notably employed a similar strategy when it bought Ballast Point Brewing & Spirits for a cool $1 billion in late 2015. At the time, the enormous valuation for a small but award-winning brewery raised eyebrows.

Yet since the acquisition, Constellation has increased the California brewery's nationwide volume by extending production to its own manufacturing facilities. Additionally, Ballast Point just opened a new brewery location in Daleville, Virginia, this month, to scale the East Coast presence of popular beers like Sculpin India Pale Ale.

The well-regarded Ballast Point platform enabled Constellation to realize its ambitions to become a dominant player in the high-end craft beer segment. It also created a transaction reference point for a few lucky companies like Casamigos.

As for this billion-dollar price point, it's important to understand that for an alcoholic beverage giant like Constellation or Diageo, a fledgling beverage start-up represents future value rather than a return on investment for current case volume.

Still, it's inherently difficult to project the future cash flows of these tiny labels, which could nonetheless become sought-after global bottles, given the right marketing and distribution push. Tellingly, Diageo doesn't even expect Casamigos to be accretive to earnings for another three years.

In this transaction, you also have to factor in the intangible value of Clooney's star power. By tying in the last $300 million to financial milestones, Diageo is ensuring that Clooney stays vested in Casamigos' success.

As a brand ambassador with international recognition, Clooney reinforces the "aspirational" character of Casamigos to potential customers. When you couple 10 years' worth of his endorsement with the resources of the world's largest spirits company, chances are decent that volume could ramp up significantly over the long term. As I noted above, these acquisitions are extremely difficult to quantify when the returns are predicated on uncertain future value. But in this particular case, the deal size is probably justified.