Coca-Cola survived and thrived following the corporate scandal, and other businesses can, too.

Back in the mid-2000s, the bottled-water industry took a blow when the truth was revealed that many brands, such as Coca-Cola's (KO -0.53%) Dasani, were merely purifying tap water. The companies had to deal with consumer backlash, but it turns out there was no reason for investors to panic.

Here's what we can learn from this episode from Coca-Cola's past.

Evaluating if the business is still sound

When scandal strikes, the first item on the agenda for investors is to evaluate the damage -- specifically, whether the core of the business operations are intact or if the revelation has done some permanent damage.

In Coca-Cola's case, bottled water was and still is a side endeavor. When it was revealed that Dasani was not sourced from some special location, the subsidiary beverage business was still new. Coca-Cola had launched the brand in 1999.

In response to public outcry, Dasani and other bottled-water brands that source from a municipal water supply started to publish where they were getting their water and how it was treated.

It was a potentially catastrophic blow for the fledgling bottled-water industry, and share prices fell at the time. However, because Dasani was merely riding sidecar to Coca-Cola's main carbonated-drink engine, the overall business continued to grow. 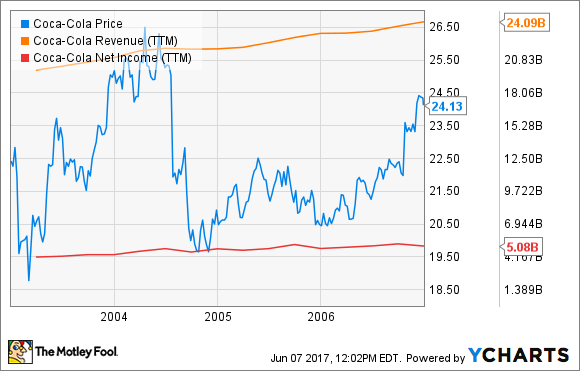 The first lesson learned is this: When a business you own suffers a PR mishap, consider how detrimental it will be to overall revenue and profitability. Has something fundamentally changed with how the company conducts business? If the answer is no, proceed to Step 2. Such was the case with Coca-Cola.

Betting on a recovery

Coca-Cola shareholders who panicked and sold during the Dasani debacle probably regretted the decision. The incident eventually blew over, and shares rebounded. The fact that Dasani was nothing more than fancy tap water turned out to be just a bump in the road.

Today, Coca-Cola stock isn't lighting the world on fire with above-average returns, but it is near the same total return (which accounts for reinvested dividends) as the S&P 500 ever since the incident. There's a reason this company has been a longtime mainstay of Warren Buffett's portfolio. 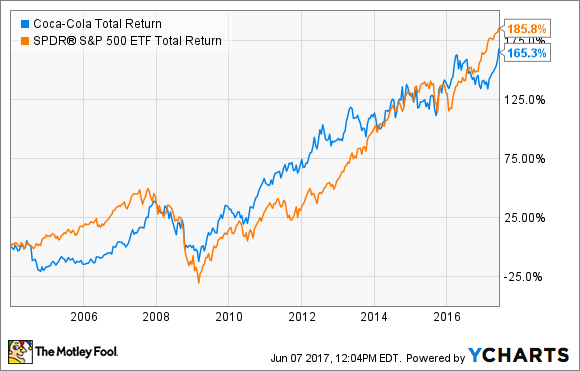 And that leads to the second and more valuable lesson: When disaster seems to loom over a business you own, if the business remains strong, it could be a good time to buy more shares. Looking at the preceding chart but instead beginning in 2005 -- when Coke stock was beaten up following the Dasani brouhaha that started when it had to pull the water from shelves in the U.K. following the tap-water revelation -- illustrates the impressive difference that buying on the dip can make. 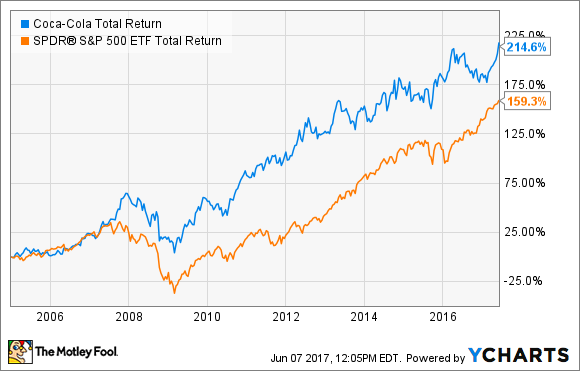 It's also important to remember that public opinion can be quite fickle. What was once an issue is long forgotten, as Coke's bottled-water business has continued to grow into a big moneymaker over the years. The company's still-beverage segment, which includes water brands such as Dasani, speaks for itself:

When a company you own is getting raked over the coals, it's important to do some digging before making a decision to sell. If business operations remain intact, a rebound could be around the corner. Coke's Dasani tap-water scandal and the stock's ensuing performance is a perfect example.