It's no secret that I'm a fan of net-lease retail real estate investment trust (REIT) Realty Income (NYSE:O). Not only is it one of my largest investments in my own portfolio, but I write about the company often.

Over the past few months, Realty Income stock price has fallen considerably and is now just above its 52-week low. There are a few things that could be causing this, such as interest rate pressure or headwinds in the retail sector. Whatever the reasons might be for the current share price, here are three things that could cause the stock to rise.

Interest rates could stay low for longer than expected

In a nutshell, rising interest rates are generally bad for REITs -- at least for their stock prices. As rates rise, income-seeking investors can get higher risk-free returns from assets like Treasury bonds and will expect even higher yields from "riskier" assets like REITs. In order for their dividends to result in higher yields, rising interest rates often create selling pressure -- and therefore lower prices -- for REITs.

To be clear, this isn't a perfect correlation, so it's not completely predictable. In other words, if the Fed raises rates, REITs don't simultaneously drop. Much of this dynamic has to do with expectations. Specifically, the Federal Reserve anticipates a series of rate increases over the next few years, and this could be a big reason for the underperformance of REITs over the past year or so. 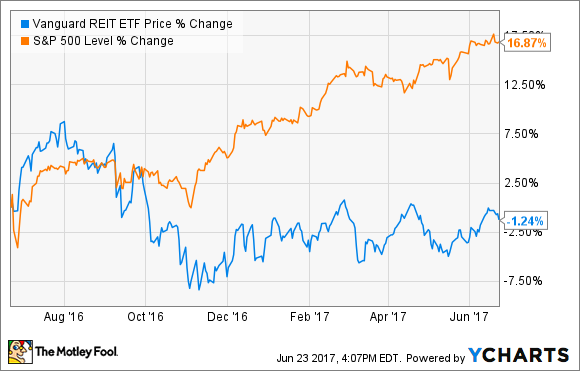 Therefore, if interest rates end up rising at a slower pace than the market is expecting, it could be a positive catalyst for REIT prices.

Retail worries could turn out to be overblown

It probably won't surprise many readers to hear that the retail sector is facing headwinds right now. There have been several high-profile bankruptcies in the past few years, and many other brick-and-mortar retailers are struggling to stay afloat. This has certainly affected REITs that invest in retail properties. Realty Income and most other retail REITs are near 52-week lows, while many other REIT subsectors have been doing just fine. 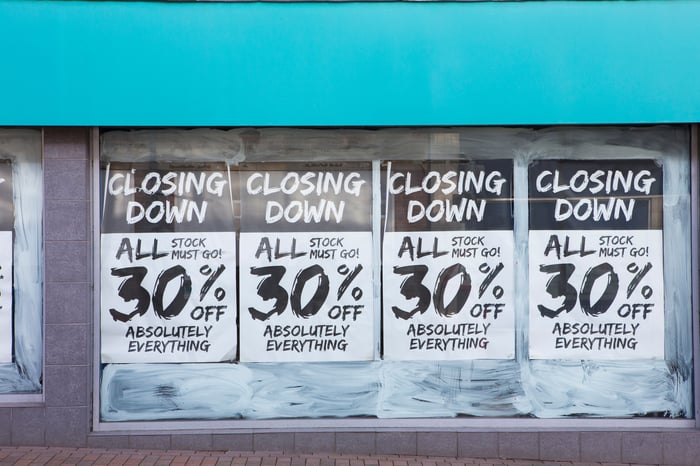 You aren't likely to see signs like these at Realty Income's tenants. Image source: Getty Images.

Even so, the market's perception seems to be that all retail is in trouble. Because of this, the company's stock price could remain depressed until the retail sector as a whole starts getting some positive news. For example, if high-profile brick-and-mortar retailers report better-than-expected sales for the second quarter of 2017, and there aren't any major bankruptcies or unexpected store closures for a while, the market's perception of the "death of retail" could start to change.

As I wrote in an article earlier this year, one of the best parts of 2016 for Realty Income was its somewhat unexpected flurry of acquisitions. The company raised its acquisition guidance every quarter last year and ended up acquiring more than twice the volume of properties it had originally expected. What's more, it did it at an extremely low cost of capital.

However, I'm not sure that this is fully baked into Realty Income's 2017 earnings guidance. The company acquired an extra $1 billion or so worth of properties at attractive investment spreads, yet the current guidance is calling for a relatively unexceptional 4.2%-6.3% funds from operations (FFO) growth rate.

Additionally, I'm not saying that any of these three things are going to happen. However, I do consider them to be quite likely to happen, and they could certainly give Realty Income a boost if they do.