The Mac maker has been expanding its presence in Seattle.

Siri is behind, and Apple (AAPL 1.37%) presumably knows it. On the flip side, Amazon.com's (AMZN 3.04%) Alexa has emerged as the leader of the virtual assistant pack, thanks largely to its massive catalog of third-party Skills, of which there are now over 13,000.

Apple first opened its engineering office in Seattle back in 2014 after acquiring Union Bay Networks, and it has been steadily expanding its presence in Amazon's backyard. Microsoft (MSFT 0.07%), which also develops a virtual assistant, is based in the Seattle suburb of Redmond. 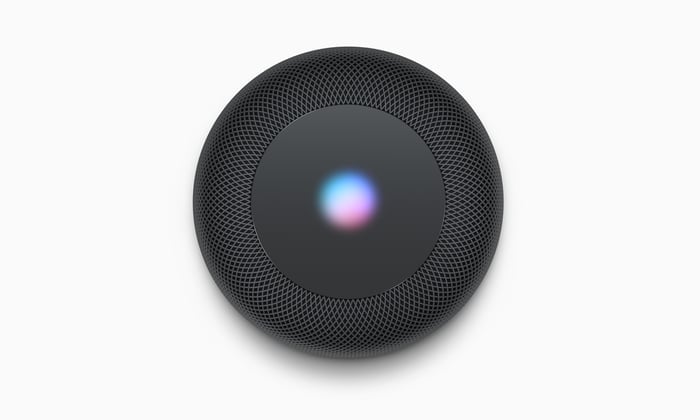 HomePod will be powered by Siri. Image source: Apple.

Last year, Apple acquired machine learning and artificial intelligence (AI) start-up Turi, which is based in Seattle, for an estimated $200 million. In February of this year, GeekWire reported that Apple would continue growing in the area, with a focus on recruiting AI and machine learning engineers. Business Insider reports that Apple has put up two new job listings for "Siri Advanced Development" at those same Seattle offices.

There are two open positions -- one for a software engineer and another for a speech scientist/engineer. In the software engineer listing, Apple says the position will help "contribute to a product that is redefining computing," and one of the key qualifications is the ability to implement "algorithms published in technical research papers" (hold on to that thought). The speech scientist/engineer position will help leverage "spoken language understanding" in a large-scale system.

Beyond the local presence of Amazon and Microsoft (and their respective AI and speech teams), Seattle is emerging as a technological center for AI; even Chinese tech giant Tencent is opening an AI research center in Seattle, led by a former Microsoft engineer. Microsoft co-founder Paul Allen also founded the Allen Institute for Artificial Intelligence (known as AI2) in Seattle in 2013. Simply put, Seattle is becoming a hotbed for AI talent.

Apple needs to open up

The Mac maker has had a tough time attracting AI talent, though, in part because of its notoriously secretive ways. While Apple presumably perceives any advances it can make it AI as proprietary, with the hopes of eventual product differentiation, the nascent field of AI research relies heavily on broader collaboration across organizations. Bloomberg Businessweek detailed the problem back in October 2015.

Until recently, Apple's AI engineers were prohibited from sharing their findings in published research papers. That's why it was big news when Apple said in December that it would start publishing its AI findings, and it's also why it's meaningful that Apple's job listing mentions technical research papers. The reference suggests that Apple may continue engaging with the AI academic community, which will be critical in recruiting AI researchers and engineers -- and catching up with the competition.