Micron is a great pure play on the rebounding memory market, but investors should recognize the risks.

Micron Technology (MU 1.70%), one of the world's top memory chipmakers, saw its shares surge 140% over the past 12 months. That big rally was sparked by two straight quarters of double-digit annual sales growth, which was fueled by a global shortage of memory chips causing a big jump in market prices.

But how much upside potential does Micron really have left? To figure that out, we'll evaluate four different risks facing the company. 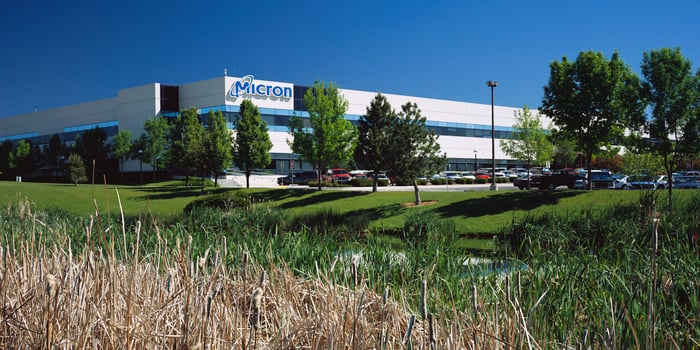 Micron isn't the biggest player in the memory chip market. It's actually the fourth-largest NAND manufacturer in the world and third-largest maker of DRAM chips. In the NAND market, it trails behind Samsung (NASDAQOTH: SSNLF), Toshiba, and Western Digital (WDC 2.77%) -- in that order. In the DRAM market, it lags behind Samsung and SK Hynix.

Being a smaller player in the chipmaking market can be tough, since larger competitors can produce chips at lower prices. That market is also undergoing consolidation. That's why Western Digital acquired SanDisk last year, and why a bidding war for Toshiba's chipmaking business recently broke out.

To keep pace with its bigger rivals, Micron is developing next-gen memory technologies like 3D NAND and 3D Xpoint with Intel (INTC -6.41%) and buying manufacturers like Inotera Memories. However, it's still unclear if these moves can adequately counter companies like Samsung, which can bundle their memory chips with other components, over the long term.

However, that growth could still be derailed by overproduction. Last December, former Micron CEO Mark Durcan warned that state-backed Chinese chipmakers -- like Tsinghua Unigroup, which tried to buy Micron in 2015 -- could flood the market with cheap memory chips. Meanwhile, bigger rivals like Samsung could produce too many chips in their effort to meet market demand -- which would cause prices to drop.

A sudden reversal in memory chip prices would devastate Micron, because its free cash flow has remained negative over the past year. That's mainly due to the prior drop in memory prices, higher R&D investments, and its acquisitions of SSD controller maker Tidal Systems in 2015 and Inotera Memories in 2016. 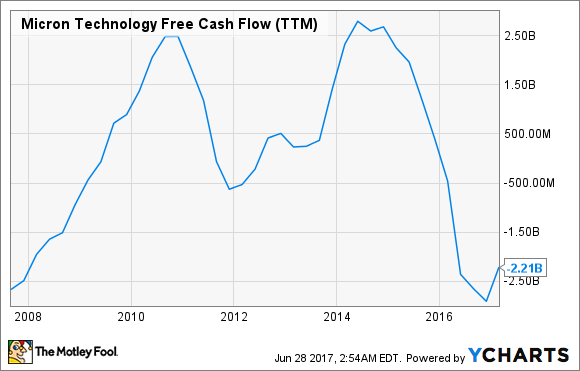 Micron initially looks pricey at 55 times earnings, but that multiple remains lower than the industry average P/E of 59 for memory chipmakers. If analysts' forecasts are on the mark, then Micron trades at just 7.5 times forward earnings.

Intel and Western Digital, respectively, have forward P/E ratios of 12 and 9. This means that Micron is still surprisingly cheap after its yearlong rally.

So how risky is Micron?

If you believe that memory prices will continue to rise, Micron can counter its bigger rivals, and that analysts' growth estimates are on target, then the stock looks like a great buy at current prices. Simply put, the short-term risks look quite low.

But if memory prices suddenly drop, Micron could give up its gains very quickly. Furthermore, investors need to know that Micron isn't a great buy-and-hold stock, since its cyclical downturns can be very challenging. Therefore, Micron's long-term risks remain quite high.