After a year, I still can't believe FedEx took on this transaction. Surely the company had enough potential for organic expansion within its own book of roughly $50 billion in pre-merger revenue. Moreover, at least in year one, folding in Europe's premier express freight company hasn't boosted FedEx's profits.

TNT added $7.4 billion of revenue to Federal Express during fiscal 2017, an amount equal to 15% of FedEx's prior-year total revenue. But the operating margin on that contribution was only 3.3%. That's after adding back $302 million in integration expenses and amortization of intangibles acquired from TNT, a sum which represents roughly 10% of FedEx's 2017 ending net income of $3.0 billion. 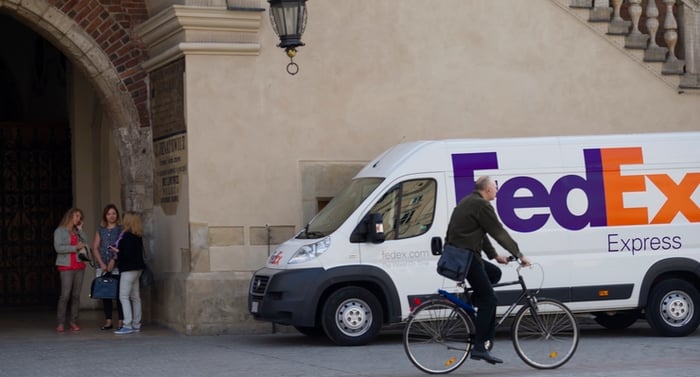 Given the costs, what specific advantages is FedEx seeking to capitalize on? In an earnings conference call after fiscal fourth-quarter 2017 results were released on June 20th, chief operating officer David Bronczek reminded participants of the tie-up's potential:

...we are working to combine the TNT group, which includes 54,000 employees, their operations across 200 countries and more than 1 million shipments daily within FedEx Express ... As we have discussed previously, the acquisition of TNT provides extensive benefits to FedEx, including rapidly accelerating our European and global growth, substantially enhancing our global footprint by leveraging TNT's low-cost road networks in Europe, in the Middle East and in Asia and expanding, of course, our customer capabilities and solutions.

So, via the exploitation of combined capabilities, FedEx is shooting for a huge aggregate improvement in the income of the two businesses of between 39% and 44% over the next three fiscal years.

It's interesting that TNT's slim operating margin of 3.3% doesn't daunt FedEx's executives. Rather, they see a path to growth, and are enabled by their own hard experience.

In fiscal 2017, FedEx Express posted an adjusted operating margin of 12.7%. According to management, that's just the first time since the segment's formation in the year 2000 that it's posted an annual operating margin in the double digits. Clearing this numerical hurdle is the fruit of many years of patient improvements in revenue yields, and a determined effort to manage costs and boost productivity.

Of course, operating margin can also get a lift from sales leverage, and that's just what FedEx wants out of its acquired European business. TNT has already expanded significantly in Spain post-acquisition. And there are complementary network strengths that FedEx is just beginning to tap.

For example, FedEx recently announced the launch of a regular Boeing 777 flight from TNT's "Euro Hub" at Liege airport in Belgium to the company's world hub in Memphis. The 75,000-square-meter facility in Liege is serviced by 42 aircraft and 126 cars and vans. An advanced automated-sorting system handles a volume of over 100,000 packages each day. The Euro hub is a symbol of FedEx's investment in European capacity, and it's ripe for even higher volume.

The farther out you look, the more these types of opportunities make the risks inherent in a complex merger integration -- slated to take another three full years -- worth taking. And to be honest, FedEx has reached a size where it must seize such risks to keep delivering shareholder value. Sure, without an immediate earnings impact, the TNT Express acquisition is still mostly about future potential. But investors seem OK with this strategy: 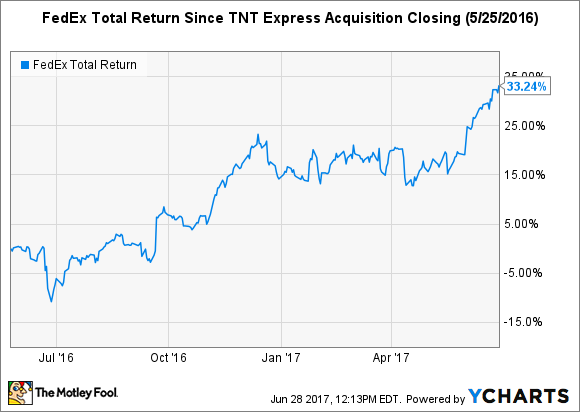