The package delivery company and its key rival United Parcel Service are facing increasing needs for capital spending in order to support growth.

It's well known that package delivery giants FedEx Corporation (FDX 0.08%) and United Parcel Service (UPS 0.19%) have a long-term growth opportunity from burgeoning e-commerce deliveries, but what's less understood is the increasing demand on the networks. It's creating the necessity for increased capital expenditures, and that's likely to negatively impact free cash flow generation in the future. Let's take a closer look.

It's fair to say that FedEx has done a better job than UPS in recent years in terms of dealing with peak demand during the holiday season and with e-commerce growth in general. According to FedEx's management, this is partly to do with FedEx running separate air and ground networks -- a strategy that allows for greater flexibility in dealing with demand surges than UPS' integrated network. On the other hand, it's part of the reason that FedEx tends to spend relatively more on capital expenditures and generates a lower return on assets than its rival. 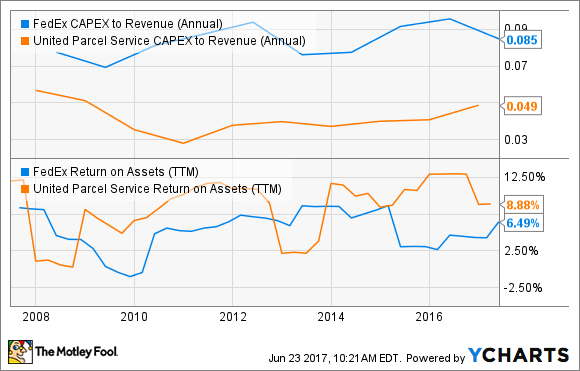 But here's the thing: Both of them are having to ramp up capital expenditures in response to e-commerce growth in general. It's not only about dealing with peak demand surges during the holiday season, UPS and FedEx are both seeing increasing demand for large heavy deliveries (trampolines, furniture, mattresses, etc.), which strains their network capacity.

Starting with UPS, back at its investor conference in November 2014, management predicted that capital expenditures would be between 4.5% and 5% of revenue in the 2015-2019 period. However, fast-forward to the most recent investor conference in February and CFO Richard Peretz now expects the figure to be more than 6% in 2017. As you can see in the chart above, that's a noticeable jump from recent times.

It's a similar story at FedEx Corporation. In order to see what's going on, take a look below at the breakout of FedEx's capital expenditures. As you can see, the absolute total has been increasing in recent years, and the forecast for 2018 of $5.9 billion implies a significant increase on the $5.1 billion in 2017. Furthermore, it's being led by a ramping-up in spending in the ground network -- largely related to servicing e-commerce. 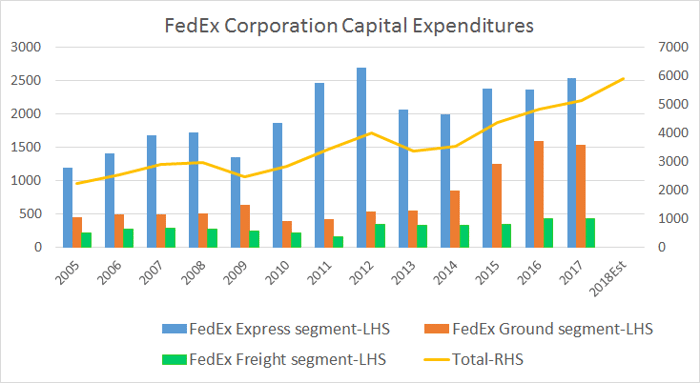 According to Perez on the recent fourth-quarter earnings call: "Our capital spending forecast for FY '18 is approximately $5.9 billion, which includes an increase in planned aircraft deliveries to support the FedEx Express fleet modernization program and continued investments in FedEx Ground automation and capacity expansion."

While the bulk of FedEx's capital expenditures are still on aircraft, you can see below how spending on package handling and ground support equipment has nearly doubled in recent years -- another sign of the increasing demands from e-commerce. 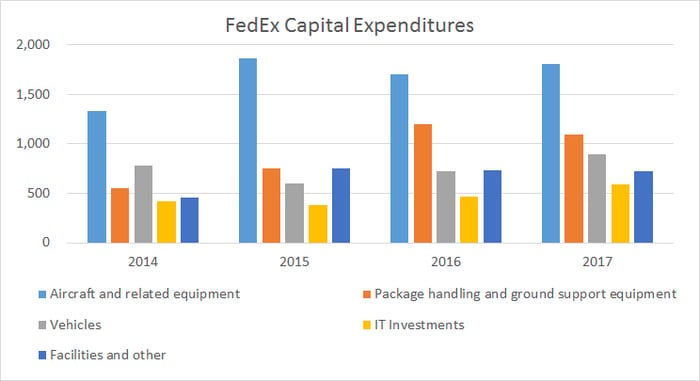 The impact of increasing capital expenditures on free cash flow can be seen in the chart below. In short, both companies are facing issues in trying to expand free cash flow. 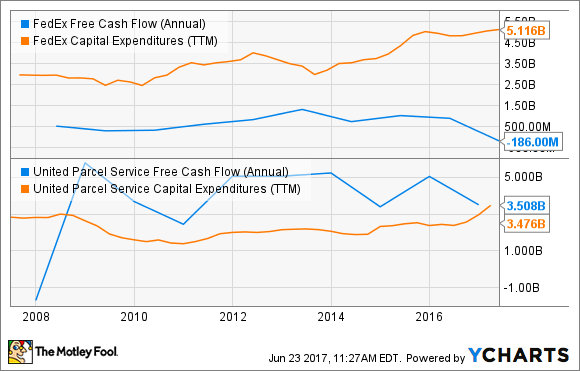 Moreover, both companies are seeing margin pressure on their ground operations thanks to e-commerce growth and, consequently, both have taken pricing actions in order to influence customer behavior -- for example, to encourage customers to package in a more efficient way -- and also increase yields. As these actions appear to be reactionary, it's possible there will be more to come, but it's somewhat contingent on customer behavior.

As FedEx CFO Alan Graf put it on the earnings call, "[T]he outlook for FedEx Ground is we remain focused on balancing yield and volume growth" -- in other words, the pricing actions need to ensure that volume growth isn't impaired while maximizing profitability. The signs are good: FedEx increased yields in its express and ground segments in the fourth-quarter, but it's early days yet. In fairness, FedEx and UPS are both arguing that the increased capital spending is in order to service growth, and will ultimately result in increased earnings and cash flow, which will ultimately offset the capital spending increases. However, both companies will have to prove that the extra expenditures are temporary measures to improve long-term profitability and cash flow rather than a permanent and ongoing step-up in capital expenditure requirements.

Probably the best way to measure events is to keep an eye out for yield and volume growth at both companies' ground operations. If they succeed in growing yield without hurting volume, then there is more chance that earnings growth will offset any spending increases. Time will tell, but it would be wrong for investors not to worry about the issue.