Costco (NASDAQ:COST) is the second-largest retailer on the planet, having booked $116 billion of revenue in its last fiscal year. The warehouse giant achieved that result with a high-volume selling strategy that allows it to operate a much smaller sales base than comparable peers like Kroger (NYSE:KR) and Home Depot.

Let's take a look at the important trends that define this high-performing retailing business today. Costco has enjoyed market-thumping revenue growth for years, with comparable-store sales gains peaking at 7% in fiscal 2015. That figure took a tumble to 4% last year, though.

The slump was driven in part by credit card switchovers that happened first in the Canadian market and then in the U.S. Shifting loyalty card brands disrupted Costco's pace of membership gains and crimped customer traffic. The key question going forward is whether that was a just a temporary dip or part of a longer-term trend. Costco's most recent results added weight to management's claim that it was just a speed bump, as shopper traffic sped back up to a healthy 4% last quarter. 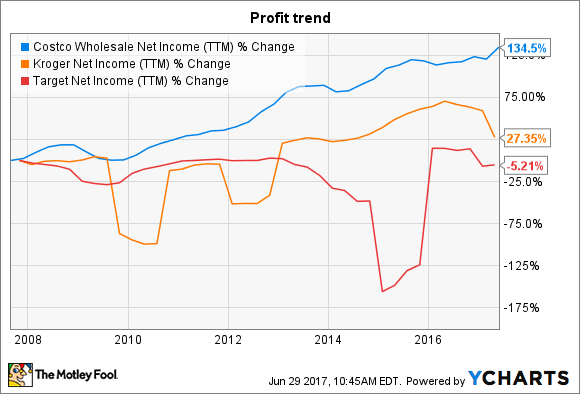 Annual profits have more than doubled to $2.4 billion from $1 billion a decade ago, for an improvement that's both bigger and less volatile than the gains peers have managed. Costco shareholders can thank the company's subscription-based selling model for that outperformance. Since it generates most of its profits from membership fees rather than product markups, the company's earnings are much more predictable than Kroger's, for example, which rise and fall with the level of price competition in the industry. 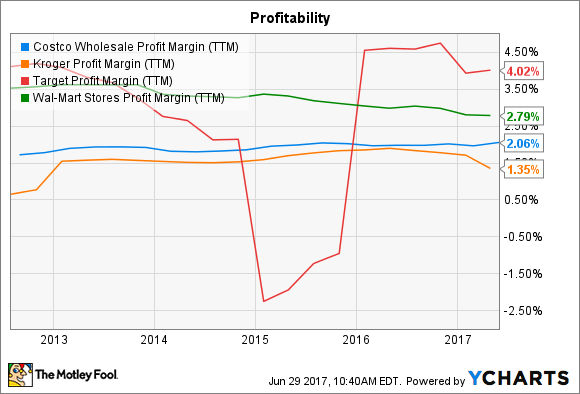 Costco's business model boils down to doing whatever it can to offer its members the lowest possible prices on goods ranging from television sets to organic groceries. As it explains in the 10-K report, the concept is that "offering our members low prices on a limited selection of nationally branded and private-label products in a wide range of merchandise categories will produce high sales volumes and rapid inventory turnover."

Management is willing to give up short-term profitability to keep its subscriber base thrilled with the shopping experience. Its 2% net income margin puts it far below other retailing chains, but has been a key driver behind its unusually high sales growth. Costco is still aggressively expanding its store base, and the 29 new locations it opened last year nearly matched its record growth pace of 30 warehouses added in 2014. The stores typically begin their lives with unusually low annual sales -- $87 million for last year's newest crop.

Over time, though, warehouses become much more efficient as they assemble a loyal membership base. The average annual sales for stores open at least a decade was $159 million last year, or 82% higher than the newest locations. Costco is targeting 26 warehouse launches in 2017, only half of which will be in the U.S. market.

Going forward, investors should keep a close eye on Costco's membership renewal trends. The rate of reups ticked down from record highs in 2016, in part because of the disruption from the co-branded credit card switchover.

With that shift behind it now, and with the savings it produced set to lower prices even further, Costco is hoping to post a rebound on this metric even as it passes along its first membership fee hike in almost six years.