Please ensure Javascript is enabled for purposes of website accessibility
Log In Help Join The Motley Fool
Free Article Join Over 1 Million Premium Members And Get More In-Depth Stock Guidance and Research
By Dan Caplinger - Jun 29, 2017 at 10:54AM

The railroad industry is a cyclical business, and railcar manufacturer Greenbrier (GBX 6.01%) has had to endure a particularly tough time for its business in recent years. A surge in tank-car demand during the oil boom several years ago boosted sales, but when the bottom fell out of the oil market, customer purchases dried up quickly, sending Greenbrier into a harsh cyclical downturn.

Coming into Thursday's fiscal third-quarter financial report, Greenbrier investors were prepared for falling revenue and earnings. The railcar manufacturer's sales figures were generally worse than what those following the stock had expected, but better bottom-line performance and encouraging signs on the order front pointed to a better future for the company. Let's take a closer look at Greenbrier and what its results say about what's coming down the track. 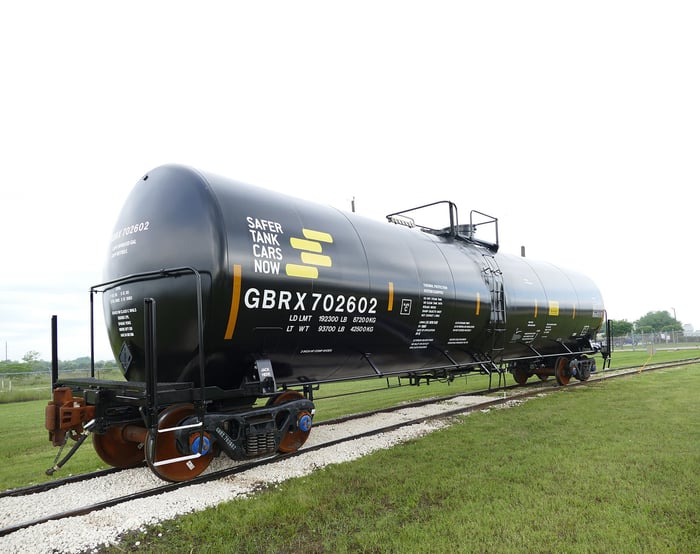 Greenbrier's fiscal third-quarter results were mixed in terms of market expectations. Revenue plunged 28% to $439.2 million, and that was far worse than the 15% drop that most investors were expecting to see from Greenbrier. The hit to the bottom line wasn't nearly as large, however, as net income came in at $32.8 million. That was down just 7% from year-ago levels, and the resulting earnings of $1.03 per share looked quite favorable compared to the consensus forecast of $0.82 per share.

When you look at Greenbrier's results more closely, you can see the main sources for the company's revenue decline. The wheels and parts segment was the sole winner on the sales front, with segment gains of 9%. But manufacturing revenue took a more than 30% hit, and revenue from leasing and services fell by more than half from year-earlier levels. Gross profit weakened across the board as costs of revenue failed to match up with changes in total sales.

Greenbrier explained some of the root causes for its performance. The timing of railcar syndications and reduced deliveries that reflected lower production rates for certain types of railcars weighed on revenue, while higher employee-related costs added to overhead expenses. New convertible debt added new interest expense, which put more pressure on the railcar manufacturer's bottom line.

Yet the company's operational figures had some promising signs. Although railcar deliveries fell by a third to 2,600 units, Greenbrier got new orders for 11,000 railcars during the quarter. That took the company's backlog higher, rising to 31,000 units worth roughly $3.1 billion. Moreover, those backlog figures don't include orders for another 500 units from the non-consolidated Greenbrier-Maxion venture.

Greenbrier CEO William Furman was pleased with how the company's long-term plans are going. "Our two-part strategy is succeeding," Furman said, pointing to the company's initiative that "protects and grows our core North American businesses while we also expand internationally in promising regions for rail transportation." The CEO noted how the strategy has helped sustain gross margin figures and bring in massive order activity.

What's ahead for Greenbrier?

Greenbrier finalized three major strategic transactions during the quarter that should bolster future growth. It formed the Greenbrier-Astra Rail venture, and it expanded its commercial relationship with Tokyo's Mitsubishi UFJ Lease & Finance with a new supply contract. Greenbrier also boosted its stakes in two ventures, owning 60% of Greenbrier-Maxion and 24.5% of Amsted-Maxion Cruzeiro.

More broadly, Greenbrier does see tough conditions in the industry continuing. In Furman's words, "While we see emerging improvements in North American and European rail markets, we still expect a challenging commercial environment into calendar 2018." The company thinks its strategic vision will be able to carry it forward despite any obstacles to growth.

Greenbrier's guidance narrowed in a slightly positive way. The new revenue projections for $2.1 billion to $2.3 billion pulled in the top and bottom ends of its previous range by the same amount, but Greenbrier's earnings guidance for $3.45 to $3.65 per share raised the midpoint of the range by $0.05 per share. Deliveries of 15,000 to 16,000 guided toward the high end of the previous range.

Greenbrier shareholders seemed to have mixed feelings about the performance, with the stock climbing 2% in premarket trading following the announcement but then falling about 3% shortly after the regular session began. As long as industry challenges persist, it might remain tough for Greenbrier to convince investors that its long-term strategic vision will pan out favorably.