When Nike Inc. (NYSE:NKE) announced in 2014 that it was ending production of its wearable fitness tracker, the FuelBand, much of the business media was puzzled.  Wired declared, "Nike failed," while others struggled understand the decision, surprised that the FuelBand was "out of gas" already.

Nike didn't suspend its connected fitness program entirely. Instead, it recognized that smartphones were becoming able to perform many of the functions that the FuelBand did, and decided to focus on software, enhancing the Nike+ app, and partnering with Apple (NASDAQ:AAPL) on the Apple Watch. 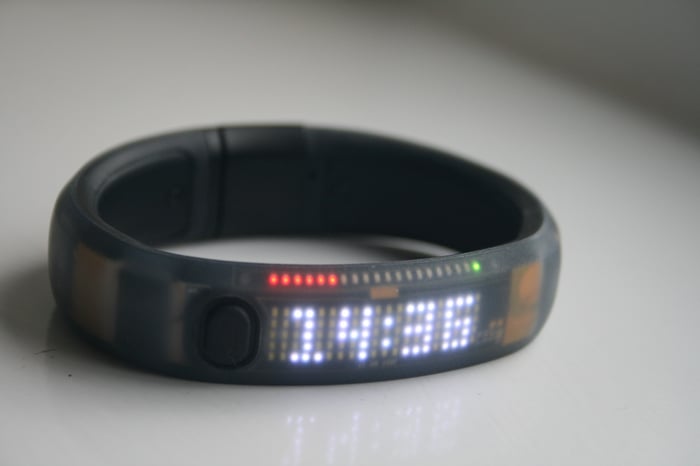 Three years later, it seems like the Swoosh made the right decision.

Wearables were supposed to be the next big thing in tech; for years, they've been seen as the next frontier after the smartphone. The Apple Watch was greeted with much anticipation, but overall, the wearables niche has mostly turned out to be a disappointment.

Apple, for instance, doesn't even break out its watch sales numbers in its public releases. According to research firm Canalys, Apple sold 11.9 million watches last year. That may sound like a significant number, but even so, the device provides just a small portion of the company's revenue.

Other players in the wearable space have disappointed the pundits as well. Fitbit (NYSE:FIT) has seen its sales growth turn into sales contraction, its shares have plummeted, and the once-profitable company is now operating at a loss, even though it remained the top seller of wearables in 2016. Device sales were down by a third year over year in the first quarter of 2017.

Under Armour (NYSE:UA) (NYSE:UAA), meanwhile, has struggled to break into the connected fitness market. Despite spending $710 million to acquire companies like MapMyFitness and MyFitnessPal to break into wearables, the sportswear company has little to show for its efforts. In the company's most recent quarter, connected fitness accounted for just $18.9 million in sales, just a 2% increase from the year before. CEO Kevin Plank has argued that those acquisitions were as much about data as building a separate business line, but the numbers are disappointing nonetheless.

Tech giants like Apple, Samsung, and Xiaomi have been gaining market share in wearables, and it seems only natural that they would have elbowed a sportswear specialist like Nike to the side had it tried to keep the FuelBand going. After all, when Nike discontinued the device, it only laid off about 55 engineers. Tech companies have much bigger engineering teams to put to the test. Nike clearly recognized it was out of its element.

Its partnership with the Apple Watch has yielded mixed results, but Nike did get some major promotion when Apple unveiled the Apple Watch Nike+ last September.  The watch offers a sweat-resistant band, and much better run-tracking capabilities than the traditional Apple Watch. It also gives Nike access to data without having to make pricey acquisitions as Under Armour did. Nike and Apple have long been close partners. Apple CEO Tim Cook has sat on Nike's board for more than a decade, and Nike introduced the Nike+ iPod back in 2006.

Apple Watch sales should continue to grow, further benefiting Nike, but a look at the woes of Fitbit and Under Armour shows why the Swoosh made the right move in cutting the FuelBand from its roster, even though it was a popular device at the time. Partnering with Apple and investing its FuelBand dollars elsewhere was the smart choice.