The package delivery giant had a lot to cover in its fourth-quarter earnings call, with both pressures and positives to contend with.

The fourth-quarter results from FedEx Corp. (FDX 0.22%) contained many guideposts for the company's future performance. Both FedEx and key rival United Parcel Service (UPS 1.33%) have a lot happening in the next few years that investors should be aware of: Here are five key takeaways from the recent report.

Capital expenditures are ramping up

As you can see from the following chart, UPS and FedEx have both been boosting their capital expenditures in recent years -- largely in response to growing demands on their networks from growth in e-commerce deliveries. In addition, the increase in spending requirements has eaten into free cash flow generation for both companies. For reference, FedEx's fiscal year ended on May 31. 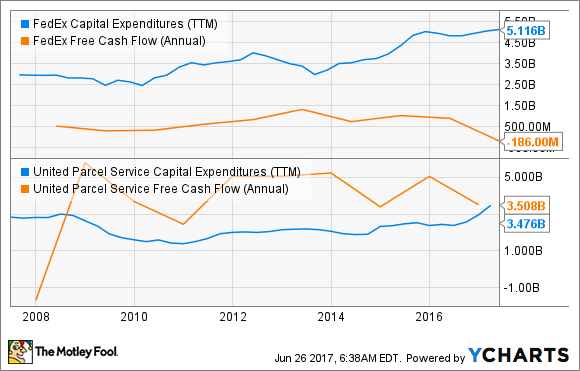 The matter has been discussed in more detail recently, but it's sufficient here to mention that on its earnings call, FedEx management outlined a significant planned increase in capital expenditures from $5.1 billion in fiscal 2017 to $5.9 billion in 2018.

While we know that UPS and FedEx are facing increased pressure to expand their networks. We also know that both have taken significant pricing actions in order to try to influence customer behavior and ensure yield growth, even at the expense of volume growth.

It was a point explicitly recognized by FedEx CEO Fred Smith on the earnings call. Responding to an emailed question, he said: " 'For the past decade, FedEx appeared to focus on achieving high volume growth, especially in the Ground segment. However, in the past year, pricing appears to have accelerated, while volume growth has been slower. Was this by design?' Let me take that. Of course, it was by design."

As you can see below, the evidence is that FedEx is achieving its aim of growing yield while maintaining volume growth, particularly in its Ground segment. 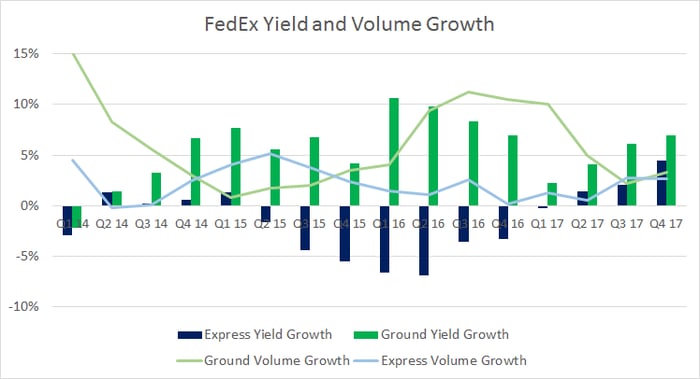 Building on the point about managing the balance between yield and volume growth at Ground, FedEx Ground CEO Henry Maier said, "We remain committed to mid-teens margins at FedEx Ground. We expect FY '18 operating profit and cash flows to exceed FY '17." For reference, Ground margin was 12.7% in fiscal 2017, so his guidance implies good margin performance in Ground for the coming year.

Of course, the new Express segment includes TNT Express, which the company acquired in May 2016. For reference, operating income for FedEx Express was $2.68 billion in fiscal 2017, so Graf's projections represent a significant improvement. The TNT Express integration may be bumpy

This is an indication that as FedEx adjusts to its expanded European presence, it may face some pricing pressure from DHL and UPS there -- before the TNT Express acquisition, both companies had far stronger positions in Europe than FedEx.

How well they're handling the peak delivery periods around the holiday season is a key question for FedEx's and UPS's operations, and the earnings call contained a possible warning. Said FedEx Executive Vice President Raj Subramaniam: "We continue to consider additional peak pricing changes but have not made a final decision in this regard." In comparison, UPS recently announced peak surcharges of between $0.27 and $0.97 during selected peak periods.

It appears that FedEx may well have to respond, because, as Subramaniam also noted, " We also continue to experience growth in demand for large, heavy package delivery as a growing array of items are now being sold online" with the trend accelerating during the last 12 months. FedEx appears to be on track to generate volume growth as well as yield increases, but it's making those advances at the cost of increased capital expenditures. Management's guidance looks positive, but the TNT Express integration won't necessarily come without competitive pressure, and FedEx may well be forced to implement peak surcharge pricing in line with UPS. It all adds up to a year of uncertainty for the stock. Management has a lot to do in 2017.