According to the Financial Times, Intel (NASDAQ:INTC) is about to lose its position as the leading chipmaker. It's a position Intel has had since it began dominating the PC processor space back in 1993, but this quarter, Samsung's (NASDAQOTH: SSNLF) chip sales will outpace Intel's -- and there may be no going back.

The past 10 years haven't been good to Intel as mobile phones and tablets have taken over, and PC sales have continued to decline. Intel famously missed its chance to supply mobile devices with its processor, and Samsung stepped in to fill the void by supplying chips for its own devices (as well as for competitors) and building out a massive memory chip business as well. 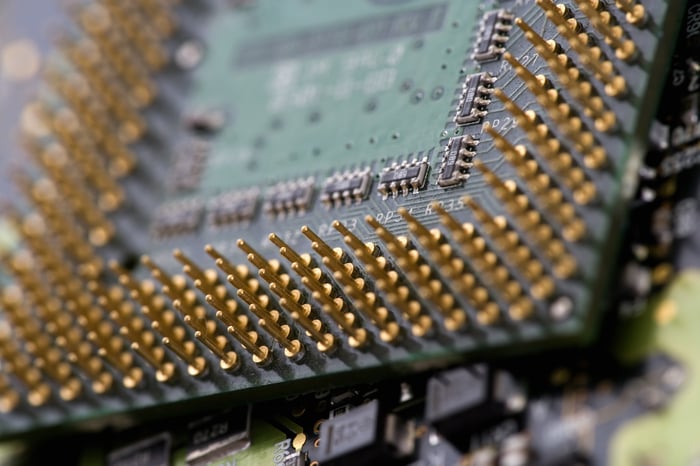 According to Nomura, a global investment bank, Samsung will generate $15.1 billion in chip sales in the April-to-June quarter, which will outpace Intel's estimated $14.4 billion, and Samsung is expected to outpace Intel in sales for the full year as well.

The South Korean conglomerate has benefited from an increase in demand for memory chips and their prices over the past few years. Samsung dominates the memory-chip market, which spans the mobile, PC, and server segments, while some memory-chip prices have surged between 15% to 25% since the beginning of this year, and are expected to increase in the third quarter as well.

What this means for Intel and Samsung

Samsung's chip division is expected to outpace Intel's chip division in terms of operating profit for the full year, hitting $28.5 billion compared to Intel's $17.6 billion. Samsung will likely continue to benefit this year from rising memory prices, increased demand for server memory, and from memory chip orders for Apple's upcoming iPhone release this fall. This news comes as Samsung is riding high in its mobile division, after its Galaxy S8 phones have already proven to be an early success.

Things are less rosy for Intel, as it is still trying to find its place in a post-PC era. The company has pivoted to the Internet of Things, but that transition is still a slow one. Intel managed to grow revenue from its Internet of Things group by 15% last year, but the segment still only accounts for about less than 5% of the company's top line.

Additionally, Intel is looking to the virtual and augmented reality market for more growth, and has even released a stand-alone VR headset, called Project Alloy, powered by its latest iCore 7 chip. Intel is also hoping that its chip sales may be helped as more PC makers focus on VR-ready machines. VR requires more powerful processors, and Intel could see an uptick in more lucrative chip sales as a result.

Intel's biggest opportunity may come from the massively growing driverless car market. Intel announced in March that it would acquire self-driving car technology company Mobileye for $15.3 billion. That move could help propel the company toward the front of the self-driving market -- and drive chip sales at the same time.

Intel knows that now, more than ever, it needs to find new ways to get boost its semiconductor sales. Investors looking for a relatively cheap play may be drawn to Intel right now -- it trades at just 11.5 times its forward earnings -- but should keep in mind that the company is still trying to find its place in the ever-changing semiconductor space.