The ultimate sign of confidence from a company is when it raises its dividend. Income investors appreciate the added payout, but even those who don't need current income can see a big dividend increase as a signal that a company's future prospects are only getting better. A few select dividend stocks have seen big dividend increases, doubling their payouts over just the past year. In particular, Newmont Mining (NYSE:NEM), Southern Copper (NYSE:SCCO), and SkyWest (NASDAQ:SKYW) have been able to deliver strong increases in dividend recently.

Newmont Mining is one of the biggest gold mining companies in the world. With a well-established portfolio of properties, Newmont has focused on reducing its costs to the greatest extent possible. Lucrative new mining opportunities also aim to be contributors to future growth. Gold prices have been volatile recently, with some fearing negative impact from the Federal Reserve's anticipated interest rate increases in the future. By selling off non-core assets, Newmont is putting itself in position to focus on its best growth prospects going forward. 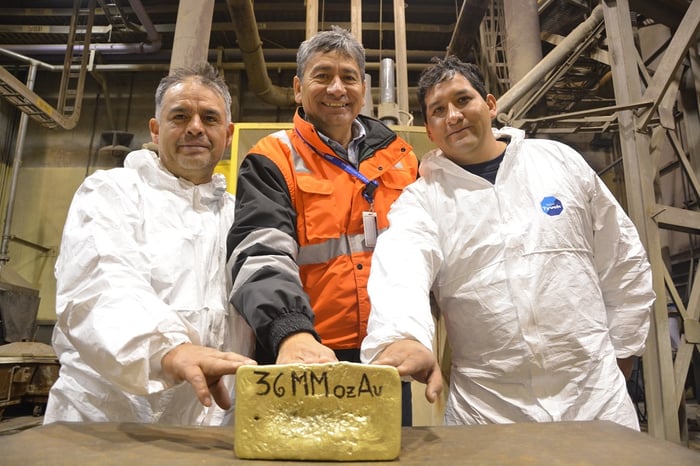 Newmont set a dividend policy several years ago that tied its payout to the price of gold. That resulted in huge declines between gold's peak in the early 2010s and its subsequent slump. Late last year, however, Newmont doubled its dividend from $0.025 per share to $0.05 on a quarterly basis. That still represents a yield of less than 1%, and it reflects that the gold market hasn't yet recovered fully from its slump. However, it does mark one milestone on what Newmont hopes will be a longer-term trajectory back toward its historical dividend rates from years ago.

Similarly, Southern Copper has had to endure the ups and downs of the commodities markets for base metals. With its industrial applications, copper has seen even more extreme reaction to the cyclical downturn in the construction and infrastructure industries than precious metals like gold, and that hurt the value of Southern Copper's extensive copper assets. More recently, copper has bounced back, and as a nearly pure play on copper production, Southern Copper has seen some of the biggest benefits from the bounce.

Southern Copper has made multiple dividend increases over the past year, including a 60% boost early in 2017 and another 50% increase in May. All told, the company has raised its payout from $0.05 to $0.12 per quarter, restoring its levels from 2013 and most of 2014. The current yield of 1.3% isn't a huge payout, but for the capital-intensive mining industry, it actually represents a substantial commitment from Southern Copper to reward shareholders for their patience.

Finally, SkyWest has been participating in the surge in the airline industry. With the proliferation of profit-enhancing measures like baggage fees and other ancillary charges, airlines have soared, and that has put SkyWest in a stronger position as the largest regional airline operator in the U.S. aviation market. By revamping its fleet and taking advantage of its fixed-fee agreements with major carriers, SkyWest has reaped big rewards.

SkyWest has moved its dividend higher in two moves. Last summer, the airline gave investors a 25% increase, and it followed up with a 60% boost earlier this year. The two moves took SkyWest's payout from $0.04 to $0.08 per share on a quarterly basis. The stock still yields less than 1%, but SkyWest's share price has climbed quickly enough to keep investors happy with its overall performance.

Dividend increases are always welcome, but it's rare to see such quick boosts to a quarterly payout. These three stocks stand out for their dividend growth, and if their good fortune continues, then it could lead to even more dividend hikes in the near future.