Regardless of how you feel about the state of politics in the United States, there is unity across the political spectrum on one key issue: infrastructure investment. No detailed plan has emerged yet, but the figures being thrown around usually call for spending up to $1 trillion in the next 10 years to update American roads, bridges, waterways, airports, water distribution, and more.

A lack of details can't stop investors from fantasizing about how such a massive spending deal could benefit their portfolio or point to new opportunities. One group of companies that stand to benefit is water utilities, which are responsible for drinking water distribution and wastewater services. Here's how such a plan could aid water stocks such as American Water Works (NYSE:AWK) and Aqua America (NYSE:WTRG). 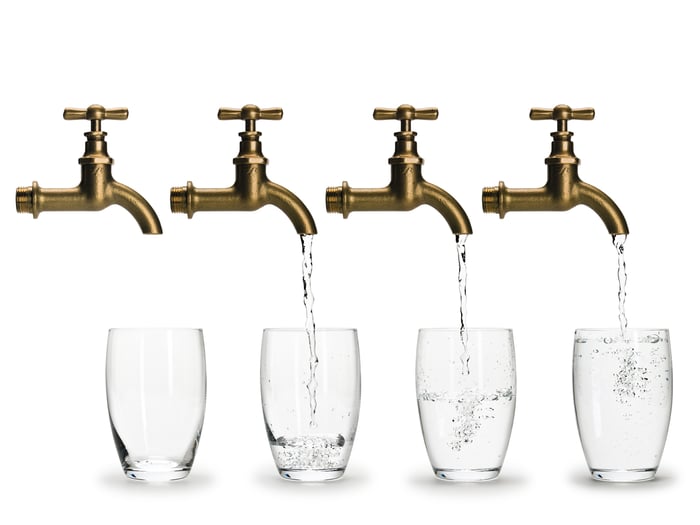 Every few years the American Society of Civil Engineers grades American infrastructure and issues a full report card complete with letter grades and estimated spending requirements. Spoiler alert: The country has never come close to passing (earning a D+ in 2013 and 2017). As if being stuck in summer school for eternity weren't bad enough for Uncle Sam, making all necessary infrastructure upgrades will cost an estimated $4.59 trillion in the next 10 years, with a funding gap of $2 trillion. Never before has $1 trillion seemed so inadequate.

The current environment is particularly poor for drinking water and wastewater infrastructure. Here are a few highlights:

The report goes on to list proposed solutions that, judging from the report card history, are usually ignored by those with decision-making power. The good news is the U.S. Environmental Protection Agency has been increasing its attention on the problem, and companies such as American Water Works and Aqua America are planning to increase investments in their regulated infrastructure over the next three-, five-, 10-, and even 25-year periods.

So, what if the companies had a little boost from a national infrastructure investment bonanza?

Both American Water Works and Aqua America generate most of their top and bottom lines from regulated infrastructure in both water distribution and wastewater services.

Here, "regulated" means the rates are set at the state level and guaranteed for a period of time. That goes a long way to ensuring stable and predictable operating cash flow for each business, which allows for predictable levels of capital expenditures for years into the future.

Say what you want about government-funded water distribution, but it creates a sort of long-term positive feedback loop. Companies concentrate operations in regions with mandated rates (usually among the most densely populated), promise to make infrastructure investments with the extra cash from rate increases, use what's left to make acquisitions in other regulated markets, and gradually upgrade more and more of the nation's infrastructure over time.

Part of this cycle is enabled by access to cheap loans at the federal level, which allows American Water Works and Aqua America to make infrastructure investments without breaking the bank with uncontrollable capital expenditures.

Imagine what could be possible if the federal government suddenly unloaded $1 trillion in funding to help, in part, speed up the rate of infrastructure improvements, rather than relying on slow-moving rate increases.

Water utilities are inherently slow-growing in large part because of the structure of the industry. They must wait for state-approved rate increases before they can pencil in infrastructure upgrades. While investments have been increasing and will continue to do so over time, the rate of upgrades is woefully inadequate to meet the country's needs. If the federal government does indeed agree to a $1 trillion infrastructure plan and allocates a sizable portion of that to water utilities, then it could result in an unusual stimulus -- and fast-paced growth -- for traditionally slow-growing water stocks. Whether a coherent plan is ever announced or enacted in Washington is another matter altogether.