If Apple can't appease publishers, Apple News' days may be numbered -- just like its predecessor.

Apple (AAPL 1.48%) jumped into news distribution in 2015 with Apple News, and the company told Recode last November that the service had garnered 70 million unique users at the time. That's a lot of eyeballs for both publishers and advertisers to chase.

Well, the company may be preparing to take its News app more seriously. 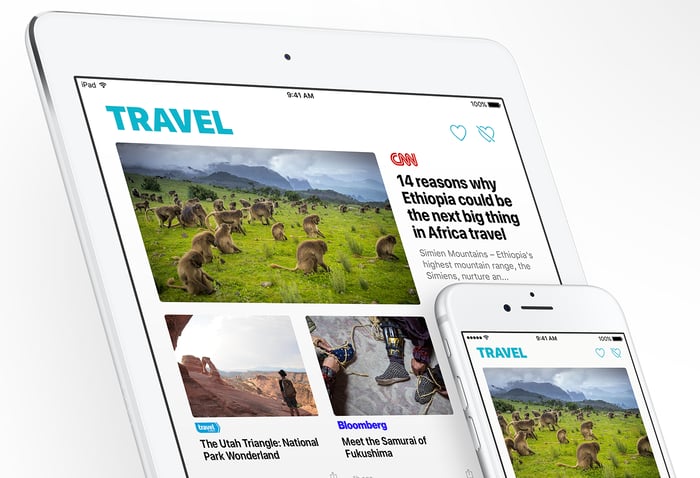 Ad Age reports that Apple is considering ceding control of ad tech to media partners, giving them more control over how to monetize content. Many publishers that distribute through Apple News aren't generating meaningful ad revenue from the platform, according to the report.

That could potentially lower the hurdles for publishers to bring their content to Apple News, which currently requires some extra effort to run an ad campaign on the platform. Many publishers have been surprised at Apple News' popularity, which reportedly has 47 million monthly users, according to comScore.

Monthly users aren't the same as the aforementioned unique user metric, so be careful not to conflate the two. Monthly users are more important, particularly to advertisers, because it shows how many users regularly use the app, instead of just unique users that may have tried it but do not use it on a regular basis. Apple may even support Alphabet subsidiary Google's ad tech, DoubleClick, in order to remove friction and bolster monetization for partners.

"There's a ton of scale there but no dollars," an unnamed publishing partner told Ad Age. "So Apple has to do something soon or publishers will pull out."

Apple's challenge is to balance those solid usage figures with publishers' financial needs, all while adhering to its fundamental goal of preserving user privacy. That's a tough balancing act, particularly since so much of modern advertising is built on user data that inherently compromises privacy. For instance, the company last month detailed tools designed to prevent cross-site tracking that it is bringing to its Safari desktop browser.

Apple has never been good at advertising

The Mac maker has a poor track record with building advertising platforms, which it has always done as an effort to provide partners additional monetization models, including app developers (remember iAd?) and now publishers.

At the same time, it has attempted to help revive the publishing industry on multiple occasions, such as through its Newsstand app, which it had hoped would help publishers sell subscriptions but has since been discontinued. Apple News is the spiritual successor to Newsstand.

Apple's challenges are similar to what Facebook (META 4.10%) is experiencing with Instant Articles (also introduced in 2015), the social network's offering that optimizes loading times for mobile sites by hosting the content directly on Facebook. Instant Articles have also been struggling for years, for largely the same reason: Publishers aren't happy with monetization.

Even a company like Facebook, whose core business is built on advertising, is finding the "walled garden" approach difficult to execute. That doesn't inspire a lot of confidence in Apple's ability to revolutionize mobile news. If Apple can't appease publishers, Apple News' days may be numbered -- just like its predecessor.