Smart speakers powered by virtual assistants are all the rage at the moment, thanks largely to Amazon.com's popular Alexa-powered Echo that has since spawned an entire family of devices. Apple has formally announced its intentions to enter the market later this year with its Siri-powered HomePod. 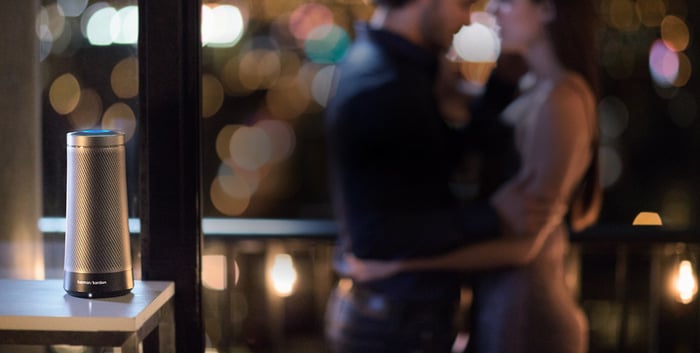 If anything, it's perhaps surprising that it's taken this long for Samsung to follow suit. The South Korean conglomerate has earned its reputation as a fast follower, and entering the market at this point in time is anything but fast (Echo first launched in 2014). Still, that's exactly what Samsung is doing, according to The Wall Street Journal.

Much remains unclear, including the timeline, specific features, and other specifications. Development of Samsung's virtual assistant Bixby appears to be one of the most prominent bottlenecks. Bixby is marketed as a headline feature of the Galaxy S8, yet is still not ready for release in the U.S., despite the fact that the flagship phone includes a dedicated Bixby button that cannot be configured to other functions (there were briefly third-party workarounds that Samsung has since blocked). Bixby still cannot understand English, and Samsung lacks sufficient data to make meaningful performance improvements, according to The Korea Herald.

Samsung had previously hoped to launch Bixby in the U.S. by the end of June, but there's no sign of it yet.

The commitment to Bixby underscores Samsung's efforts over the years to diversify beyond hardware and improve its software and services, but the company has little to show for it; it still relies on software partners to provide the operating system for the majority of its products. Bixby is just the latest example of Samsung trying but ultimately lagging in this department.

Which raises an obvious question: Why doesn't Samsung just implement a virtual assistant from one of its partners? Alphabet subsidiary Google released a software development kid (SDK) earlier this year that allows hardware makers to implement Google Assistant; Microsoft has already announced two upcoming Cortana-powered speakers made by HP and perhaps more notably, Harman Kardon -- which is now owned by Samsung.

Going with a third-party virtual assistant would be undoubtedly much easier for Samsung, but that would require Samsung to compromise on its hope of differentiating itself through software. Given Samsung's abysmal track record of creating software platforms of its own, it seems unlikely that Bixby will be any different. In which case, Samsung should just go with Google Assistant or Cortana and do what it does best: make great hardware.

Samsung Is Jumping Into Smart Speakers, Too @themotleyfool #stocks Next Article
Current