Airbus (OTC:EADSY) is entering the race to build reusable rockets. But it may be too late. 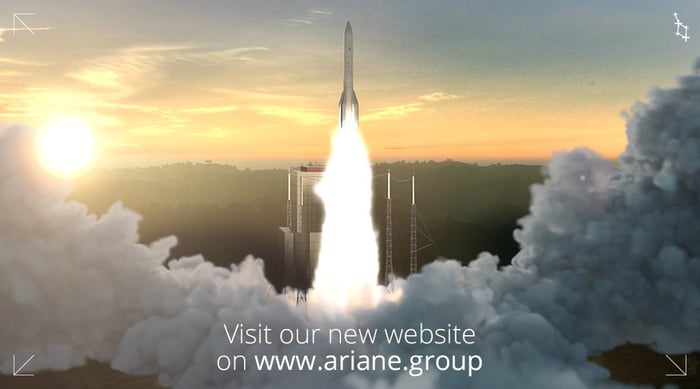 ArianeGroup got a new name last week. Its new rocket engine, though, will take another 15 years to arrive. Image source: ArianeGroup.

We don't know a whole lot about the new engine just yet, much less about whatever rocket it will power. But here's what we do know:

Thus, Prometheus promises to deal a one-two punch to ArianeGroup's space-launch cost, which is currently at least 20% cheaper per ton of payload than launches conducted by Boeing (NYSE:BA)-Lockheed Martin (NYSE:LMT) joint venture United Launch Alliance -- but nearly twice as expensive as what SpaceX charges. By recovering and reusing an engine after launch, ArianeGroup will be able to save the cost of building entirely new engines from scratch after each launch. At the same time, ArianeGroup plans to cut the absolute cost of the engine by 90%.

All of this sounds like very good news for ArianeGroup, which owns a 74% supermajority of its primary customer, rocket launcher Arianespace. It's good news for ArianeGroup's two 50-50 owners, Airbus and Safran S.A. (OTC:SAFRY), and marginally better news for Airbus in particular. While both Airbus and Safran own 37% of Arianespace directly, Airbus controls an additional 4% stake in ArianeGroup through its subsidiaries and so would reap a proportionately greater benefit from Prometheus' cost savings.

There's just one problem, though, which should temper investors' enthusiasm for Airbus' and Safran's abilities to profit from a cheaper, and reusable, Prometheus engine: SpaceX got there first.

On Friday last week -- just one day after ArianeGroup's announcement -- Airbus, Boeing, and Lockheed Martin rival SpaceX landed a reusable rocket back on Earth. Then it landed another on Sunday. In fact, SpaceX has now successfully launched and relanded rockets 13 times since first accomplishing the feat back in December 2015. What's more, SpaceX has reused two of those rockets, relaunching and relanding them back on Earth a second time. It's done so twice -- first in March 2017, and then again with Friday's launch and landing of a rocket that already had made a trip to space back in January.

In fact, SpaceX has gotten so good at launching and landing first-stage engines that it's moved on to recovering other rocket parts from its launches -- a $6 million rocket nose cone in April, for example. It's also succeeded in launching, recovering, and relaunching a Dragon cargo capsule. And with each successful reuse of a rocket part, SpaceX drives its costs down a little bit further, undercutting the prices that Boeing and Lockheed Martin must charge for their rocket launches, and undercutting Airbus' prized space subsidiary as well.

So what's the upshot for investors?

Relative to SpaceX's successes, ArianeGroup's proud announcement that it has begun planning to build a reusable rocket -- and won't be ready to use it for another 13 years -- kind of pales in comparison. Sad to say, ArianeGroup is coming to this game 15 years too late. By the time 2030 rolls around, ArianeGroup might not even be in business anymore.