Please ensure Javascript is enabled for purposes of website accessibility
Log In Help Join The Motley Fool
Free Article Join Over 1 Million Premium Members And Get More In-Depth Stock Guidance and Research
By Eric Volkman - Jul 6, 2017 at 9:04AM

Shares of Wynn Resorts, Las Vegas Sands, and MGM Resorts International are down on the news.

Gamblers in Macau are laying down comparatively more money, but not quite as much as analysts had expected. The enclave's Gaming Inspection and Coordination Bureau announced that gaming revenue for the month of June rose by 25.9% on a year-over-year basis to nearly 20 billion patacas ($2.4 billion).

Although that's an impressive growth figure at first glance, it fell just short of the average analyst estimate of 26.8%.

The stock prices of all three major American casino resort operators active on the Macau market slipped on the news. Since it was announced, Wynn Resorts (WYNN -2.81%) and Las Vegas Sands (LVS -0.24%) are both down marginally, while MGM Resorts International (MGM -2.50%) has declined by nearly 9%. 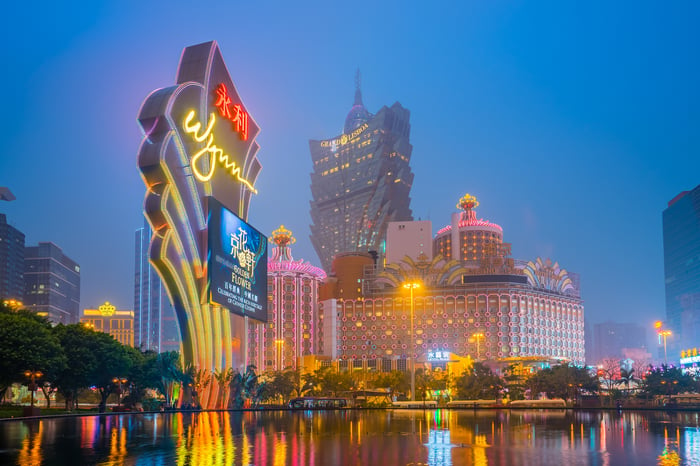 A big reason for the disappointment may be that the May growth figure was so encouraging. That month's revenue increase blew way past expectations, coming in at nearly 24%, versus the average expectation of a mere 16.5%. Compared to that, June's near-miss was crushing.

Wynn, Las Vegas Sands, and MGM investors should zoom out and look at the bigger picture, which is quite encouraging. Following a long period of decline due to restrictions on the local gambling industry imposed by the Chinese government, Macau has now recorded substantial year-over-year growth for 11 months in a row.

The three companies will reap the rewards of that growth. Wynn and Las Vegas Sands both recently opened their newest resorts in the Cotai region of the enclave (Wynn Palace and the Parisian Macao, respectively). Meanwhile, the MGM Cotai is slated to open its doors in the second half of this year.

Yes, Macau's June growth could have been better. But the enclave is still on the rise, and the power trio of American casino operators will ride the wave. Investors in those companies shouldn't be concerned about the June near-miss.