A big run-up in Exact Sciences (NASDAQ:EXAS) shares in May led to management tapping investors for more funding in June, and that caused shares to slide 7.5%, according to S&P Global Market Intelligence. Because the company plans to continue outspending its revenue in order to establish Cologuard in the marketplace, it's unsurprising it issued more shares in June when shares were near 52-week highs. After all, the proverb "make hay while the sun shines" is particularly relevant when it comes to growth stocks like Exact Sciences. 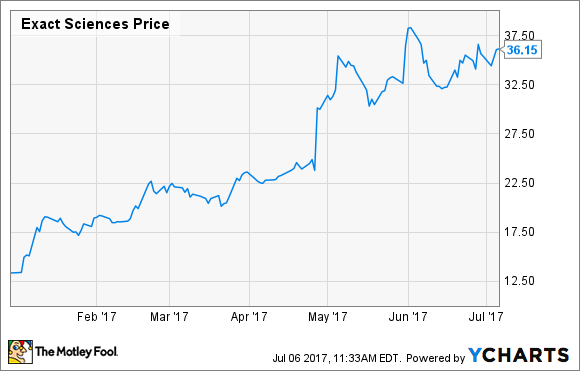 Overall, the company offered 7 million shares of common stock at a price of $35 per share, plus an option to buy an additional 1.05 million shares at that same price. In total, the offering raised $281.5 million gross of fees, assuming all of the shares that were offered were sold.

Stock offerings dilute investors, so it shouldn't be shocking that Exact Sciences' share price trended lower last month. However, investors might want to hold onto their shares because there's little sign that Cologuard sales are slowing.

So far, over 450,000 patients have been tested for colon cancer using Cologuard, and 45% of these tests were for previously unscreened patients. Colon cancer is much harder to treat if its diagnosed in its late stages, so catching it early is a big focus of doctors and anti-cancer advocates. Currently, guidelines recommend regular screening for anyone between the ages of 50 and 74, so this is undeniably a massive addressable market.

This year, Exact Sciences expects to complete 470,000 tests, up from 244,000 tests in 2016, and if it hits its target, sales should eclipse $195 million, up from $99 million last year. That won't be enough to get this company into the black, but given the market opportunity, it's not a stretch to think test volume will continue growing, and profitability will eventually follow.