Please ensure Javascript is enabled for purposes of website accessibility
Log In Help Join The Motley Fool
Free Article Join Over 1 Million Premium Members And Get More In-Depth Stock Guidance and Research
By Joe Tenebruso - Jul 8, 2017 at 10:45AM

Some interesting facts about the entertainment powerhouse.

From its founding in 1923, Walt Disney (DIS -2.06%) has delighted millions of people around the world. The global entertainment titan has a rich history, including bold ventures, blockbuster acquisitions, and impressive shareholder value creation.

Yet while Disney's brands are known worldwide and beloved by millions, there are likely many aspects of its business about which you may not be aware. Here are six things you may find interesting about The Walt Disney Company. 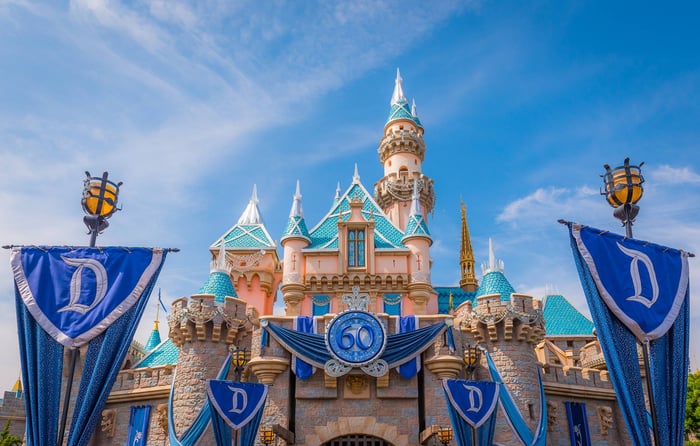 Founder Walt Disney's ambitious vision of a large-scale theme park came to fruition on July 17, 1955,, when Disneyland opened to the public. Yet opening day didn't go so smoothly, according to History.com:

People produced counterfeit tickets, leading to an over-capacity crowd of attendees; rides broke; parts of the park were unfinished and a gas leak forced Fantasyland to be closed. Disneyland's debut was showcased in a live TV broadcast --co-hosted by then-actor Ronald Reagan and seen by approximately 70 million Americans -- yet the program was riddled with technical difficulties.

Nevertheless, History.com notes that Disneyland was an immediate success, and would go on to host more than a half-million visitors in its first month. In recent years, Disneyland's annual attendance surpassed 18 million, making it one of the top 10 theme parks in the world.

Disney went on to build an even larger park -- Walt Disney World -- that opened in 1971. The park now spans 40 square miles, or about the size of San Francisco. More than 70,000 "cast members" help operate the massive resort, making Walt Disney World the largest single-site employer in the United States. And its 20-plus million annual visitors make it the most heavily trafficked theme park in the world.

Disney would later expand beyond the United States with parks in Japan and Europe. Most recently, the House of Mouse spent $5.5 billion to build a new resort in China, called Shanghai Disneyland.

An estimated 330 million people live within a three-hour train or car trip to Shanghai Disneyland. In turn, more than 10 million guests have visited the resort since its opening on June 16, 2016.

While general inflation no doubt played a role in this increase, $1.00 back in July 1955 would be worth about $9.13 in today's dollars on an inflation-adjusted basis, according to the Bureau of Labor Statistics. Therefore, most of the remainder of this ticket price growth is largely a testament to Disney's ability to raise prices above the rate of inflation at its parks and resorts. This is known as pricing power, and it's an important factor in Disney's long-term success both as a business and an investment.

Of course, Disney's empire expands far beyond theme parks, and major acquisitions have played an important role in making Disney what it is today. The company paid $7.4 billion for Pixar in 2006 and $4 billion each for Marvel in 2009 and Lucasfilm in 2012. In the process, Disney acquired iconic characters and storylines such as Toy Story, The Avengers, and Star Wars, all of which are already billion-dollar franchises for Disney.

Yet perhaps no acquisition has had as large an impact as ESPN, in which Disney took an 80% stake as part of its acquisition of ABC in 1996. Today, ESPN generates an estimated $4 billion in annual cash profits for Disney, according to the Economist.

While cord-cutting has led to a decline in subscribers in recent years, the network continues to dominate the sports entertainment industry. In fact, in 2016, ESPN, ESPN2, and ESPNU averaged 42% more viewers than the next eight most watched English-language cable sports networks combined.

Moreover, in a sign that ESPN can continue to flourish in a multidevice world, the WatchESPN app averaged 8.2 million unique devices and 1.8 billion minutes per month in 2016, up 31% and 52%, respectively, from the prior year. And, importantly, overall fan engagement remains strong as ESPN and its flagship highlight show SportsCenter each surpassed 30 million followers on Twitter -- figures that are more than 10 times larger than that of ESPN's closest rivals.

All told, ESPN -- like Pixar, Marvel, and Lucasfilm -- is a titan in its industry. Combined with Disney's sprawling theme park empire, these powerful businesses form the core of a global entertainment distribution machine that's unrivaled in the world today -- and that will likely remain so for many years to come.