Please ensure Javascript is enabled for purposes of website accessibility
Log In Help Join The Motley Fool
Free Article Join Over 1 Million Premium Members And Get More In-Depth Stock Guidance and Research
By Steve Symington - Jul 8, 2017 at 8:00AM

The gunmaker started the year on a high note. Here's what investors need to know.

Shares of Sturm, Ruger & Company (RGR 0.71%) have climbed 17% so far in 2017, according to data provided by S&P Global Market Intelligence, thanks to a combination of surging FBI gun checks and a strong quarterly report from the firearms specialist.

Ruger stock was largely flat between the start of the year and the end of March. But shares began to tick higher in April after the FBI announced that it had reviewed 2.4 million background checks for prospective gun buyers, marking a surprising 9% sequential increase from February. This also helped appease investors' concerns that a gun-friendly President Trump in office could create a dramatic lull in firearms demand. 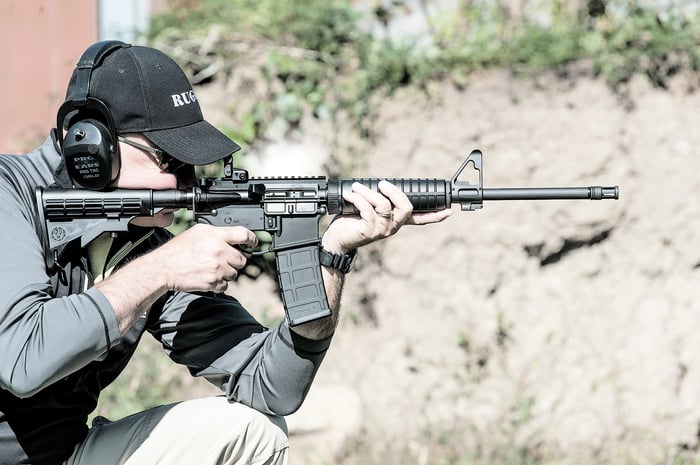 It turns out those concerns weren't too far off the mark. In early May, Ruger confirmed that revenue fell modestly on a year-over-year basis to $167.4 million, and earnings were roughly flat at $1.21 per share. Ruger also noted that last year's political campaigns resulted in lower demand from both consumers and retailers alike. But while that might not sound encouraging, Ruger stock skyrocketed around 10% that day as its results handily exceeded Wall Street's more dire expectations.

To be fair, I should also point out that Ruger has achieved these year-to-date gains despite dropping nearly 8% in a single day last week. For that, investors can thank painful forward earnings guidance that overshadowed an otherwise strong quarterly report from firearms peer (and Smith & Wesson parent) American Outdoor Brands (SWBI 0.27%). Of course, it's unclear at this point whether American Outdoor Brands' woes will translate to Ruger. But it's not uncommon to see firearms stocks swing in lockstep as investors fear the worst.

So while Sturm, Ruger has still delivered strong returns so far in 2017, shareholders should be watching the state of its business closely in the coming quarters.