Here are three stocks with a lot of potential and small price tags.

Having said that, there are some advantages when investing in lower-priced stocks, particularly for smaller, retail investors. Let's say that you have $1,000 to invest and you want to buy shares of Chipotle, which trades for $415 as of this writing. You can only buy two shares, and $170 of your cash would be sitting on the sidelines. On the other hand, if you wanted to buy Fitbit, which trades for $5.31, you can buy 188 shares, and leave less than $2 in cash. In other words, a lower share price can allow you to put more of your money to work.

With that in mind, here are three sub-$10 stocks that I think are worth a look now.

Wearable technology still has some growing to do

I own Fitbit (FIT) stock in my own portfolio, and I consider it to be the most speculative stock that I own. It's important to realize that there is a lot that needs to go right for the wearable-technology company before the stock will get anywhere near its $20 IPO price. It needs to deal with intense competition from companies such as Apple and Garmin, and has to come up with some truly innovative product offerings to do that. 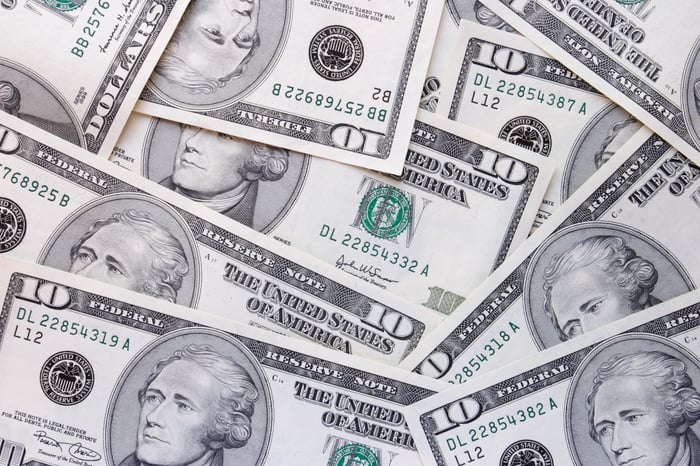 Having said that, I consider Fitbit to be a compelling risk/reward at its current price. New products are expected to launch this fall, including a smartwatch that is intended to be a direct competitor to the Apple Watch, with some superior features. And Fitbit is actively trying to develop ways for its products to help address major medical issues, such as diabetes and sleep apnea, as my colleague Rick Munarriz recently wrote.

If it can successfully do this, the sky is the limit. And don't forget, with a market capitalization of less than $1 billion, Fitbit could be a compelling takeover target as well.

Retail real estate investment trust DDR Corp. (SITC -0.22%) is in the middle of a restructuring effort, and its shares have taken a beating recently. The perceived retail sector weakness hasn't helped, either.

However, DDR could still be a smart play for patient investors. The company's new executive team is in the process of streamlining operations, and has finalized a property disposition list and successfully lengthened its debt maturities. After it completes its intended dispositions, DDR will have below-average leverage.

Also, while the company has suffered a bit due to retail bankruptcies and store closures, it has said that there is a "healthy list" of replacement anchors looking for new space. Plus, many of its top tenants, such as TJX and Ross Stores, are not only surviving the current retail environment but are actively growing.

While it may take some time for the retail headwinds to dissipate and for DDR's restructuring plan to be completed, DDR could have a bright future ahead. In the meantime, the stock pays a 8.4% dividend yield while you're waiting.

A smart but risky play on infrastructure spending

Since reaching highs of more than $12 per share in February, iron ore miner Cliffs Natural Resources (CLF 2.46%) stock has fallen by 44%. The price of iron ore has been falling, so it's not much of a surprise that stocks of companies that deal in iron ore have dropped as well.

Despite the drop, Cliffs business doesn't look too bad. Excluding a one-time charge related to debt reduction, Cliffs had a profitable first quarter, and debt is down by more than 35% over the past year. And while there is certainly more work to be done in improving the company's balance sheet, the progress made so far as well as the company's attitude toward future debt reduction are encouraging. In its most recent conference call, management said that "2017 will be fully dedicated to continue to pay down debt, and we are going to end 2017 substantially below $1 billion."

In a nutshell, Cliffs remains a turnaround play, but if it continues on its current trajectory (and commodity prices cooperate a bit), investors with the risk tolerance needed to own the miner could be handsomely rewarded.

Why Cleveland-Cliffs Fell 20.9% in April