The craft-brewing company has had a rough year so far. Here's what investors need to know.

Shares of Boston Beer Company Inc. (SAM 0.04%) have fallen 22.4% so far in 2017, according to data from S&P Global Market Intelligence, as the craft brewer finds itself fighting to stem market-share losses in its increasingly competitive niche.

Shares fell around 5% in a single day in late February, after Boston Beer posted underwhelming fourth-quarter 2016 results. At the time, founder and Chairman Jim Koch blamed a modest 2% increase in shipment volume and a disappointing 1% decline in depletions -- a key industry measure for how fast Boston Beer's products travel from warehouses to consumer outlets -- on "the general softening of the craft-beer category and cider category and a more challenging retail environment with a lot of new options for our drinkers." 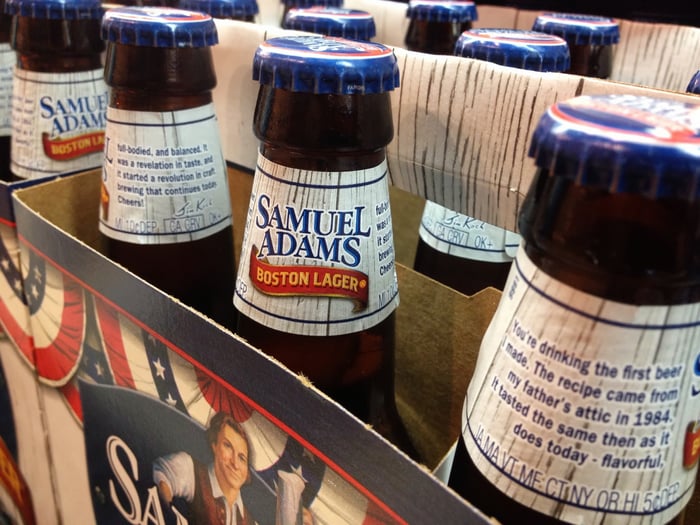 Boston Beer stock was little changed after the company posted arguably more disappointing first-quarter 2017 results in late April -- perhaps reflecting an already-low bar set by the company -- when it told investors that quarterly revenue had declined 14.6% to $161.7 million while depletions fell 14%. This time, Koch singled out particular weakness in Samuel Adams' spring seasonal varieties, while continuing to describe a tough market for craft beer as more brewers expand distribution.

And Boston Beer isn't getting much love from Wall Street, either. Last month, analysts at Cowen reiterated their "underperform" rating on Boston Beer stock and assigned a per-share price rating of $126. (Shares are currently trading around $131.) To justify their bearishness, Cowen's Vivien Azer argued that Boston Beer faces fundamental business challenges that won't be solved as it begins to lap easier comparisons this year. Moreover, Azer says Boston Beer could continue to lose market share, which in turn presents the risk for downward guidance revisions.

As it stands, Boston Beer's latest guidance calls for 2017 earnings per diluted share in the range of $4.20 to $6.20, assuming a depletions change of minus-7% to minus-1%, and national price increases of between 1% and 2%.

That's not to say Boston Beer can't right its ship. The company is working hard to differentiate its brand through packaging innovation and marketing initiatives, all as it doubles down on cost-cutting projects to emerge a leaner business in the end.

For now, however, until those initiatives begin to yield fruit, it's no surprise to see Boston Beer shares trading near 52-week lows.