Shares of the burrito chain have been mostly flat since the E. coli outbreak, but the stock has to break one way or another eventually.

You've probably heard about Chipotle Mexican Grill's (CMG 1.70%) woes by now. The stock tumbled in late 2015 because of an E. coli outbreak that was the latest in a series of food-borne illness incidents that year. A Norovirus outbreak at a Boston location in December of that year only exacerbated customer concerns and pushed shares lower.

The stock fell nearly 50% in just a two-month span and remains well below its all-time high as it recently gave back gains from a modest recovery earlier this year. Will this one-time market darling ever come back? It's not an easy question to answer. 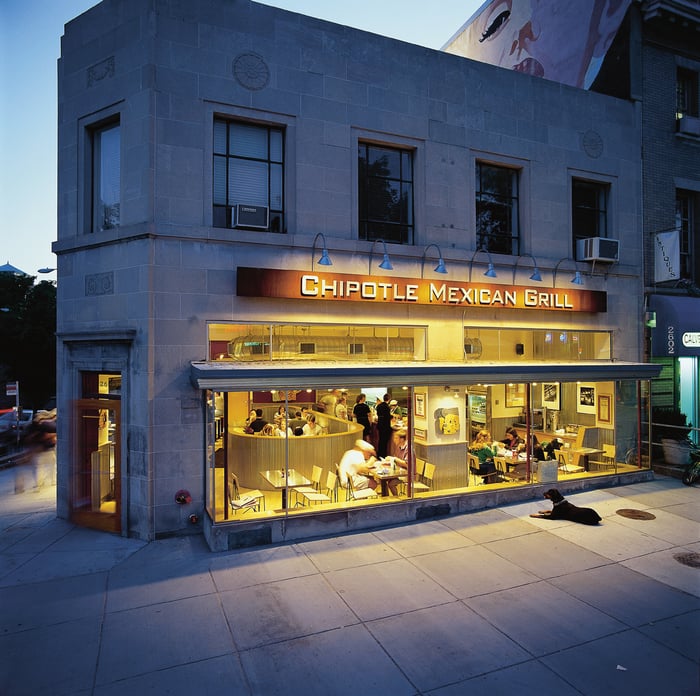 When news of the E. coli outbreak broke and the stock started to plummet, a number of analysts drew comparisons to previous E. coli outbreaks, most famously at Jack in the Box (JACK -2.53%) and Yum! Brands' (YUM 1.77%) Taco Bell.

The 1993 incident at Jack in the Box was one of the worst on record, sickening around 700 people and even killing four children. At Taco Bell, more than 70 customers in the Northeast became ill from E. coli in 2006, compared to just around the 50 who contracted the virus during the Chipotle outbreak.

However, Taco Bell's sales recovered by the next year, and even Jack in the Box did not lose as many sales as Chipotle. In its first full quarter after the outbreak, Jack in the Box saw comps fall 22%, but that decline was in just the single-digits over the next two quarters as management took aggressive action to identify the source of tainted beef supply, cover medical expenses for victims, and changed procedures to ensure safety.

Chipotle, by contrast, saw same-store sales plummet 30% in its first full quarter after the outbreak and experienced a 20% decline for the entirety of 2016. Management was slow-footed in its response to the news and at times blamed the media and the Center for Disease Control's reporting method for the precipitous fall in traffic. Chipotle also had based its reputation on "Food with Integrity," and had courted customers because of its organic and humanely sourced ingredients. That means the reputational damage to Chipotle was much greater than it was for Jack in the Box or Taco Bell, and many customers lost faith in Chipotle.

In 2017, Chipotle has mostly put the E. coli crisis behind it, but the company is only calling for a comparable sales increase in the high-single digits, meaning comps will have fallen by more than 10% over the last two years. Chipotle still hasn't won back all of its customers.

However, it seems like food safety concerns are not the company's primary challenge. CEO Steve Ells recently noted that many of its restaurants are receiving "C" grades for restaurant operations, failing to do things like keep restaurants clean and drink stations stocked. He sees these problems as low-hanging fruit that should lead to increased traffic once the company corrects them.

Some customers may have simply found other restaurants they prefer and don't see a need to return to Chipotle. The burrito roller's own success spurred a boom in fast casual restaurants and the company faces considerably more competition than it did ten years ago.

At this point, it's unclear if Chipotle will reclaim its success of old with average unit volumes of $2.5 million and a strong brand. The stock sunk in June when management said that marketing expenses were increasing, but it held its same-store sales projections.

With a P/E around 50 based on this year's earnings, investors are still betting on a comeback, but that also means Chipotle stock could just as easily fall. If growth were more in line with the industry, the stock could fall by half.

The company will report earnings at the end of the month, but don't expect any easy answers. The stock is still stuck in a no-man's land, and no one really knows where it's headed from here.