Shares of Zion Oil & Gas (OTC:ZN) had been scorching hot this year, rocketing more than 325% since the start of the year before giving back some gains today. As of 2:45 p.m. EDT, the Israel-focused driller's stock was down more than 15% on some profit taking, though it's still up more than 200% for the year.

Zion Oil & Gas stock started taking off in earnest in June, when it began drilling the Megiddo-Jezreel 1 Well, which is a deep, onshore well located in Israel's Jezreel Valley. That was a noteworthy event for the company given that it had endured a "complicated and difficult journey to get to this point," according to CEO Victor Carrillo. 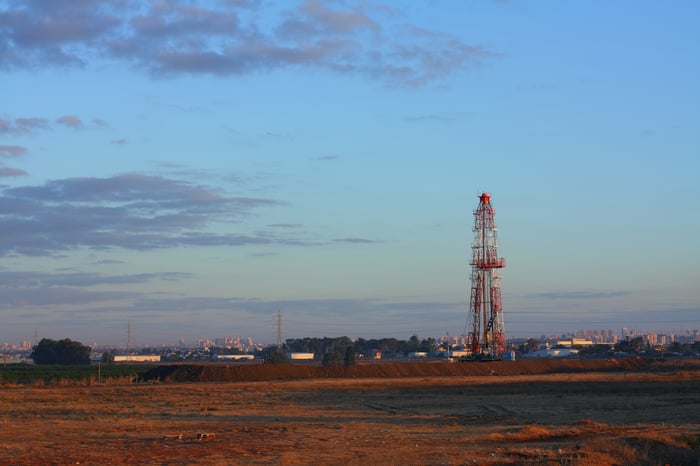 Zion Oil & Gas is planning to drill the well to a total depth of 15,000 feet, which will take it through four different geological strata that the company believes have oil and gas potential. It has already drilled through 3,280 feet, according to its last update, and was pleased with its progress.

The company's hope is that this exploration well will lead to the discovery of a massive untapped energy resource. One of the drivers of that belief is that U.S. driller Noble Energy (NASDAQ:NBL) discovered a large-scale offshore gas resource in the Levant Basin in 1999. As a result of that and other discoveries, Noble Energy currently supplies 60% of the gas needed to power the country of Israel from its Tamar Platform. Furthermore, it's on pace to deliver additional production from its Leviathan field by the end of 2019.

That said, at the moment all Zion Oil & Gas has is the hope that it can also uncover a massive new oil and gas field in Israel. While the start-up of drilling does make that dream closer to reality, Zion hasn't yet found a drop of oil. Given the risks of exploration drilling, it's quite possible that Zion will come up dry. Furthermore, even if it does find oil or gas, it might not find enough hydrocarbons to be commercially viable. That's why some investors who took a gamble on Zion's stock during its recent run-up are cashing out today.

Zion Oil & Gas is as risky an oil stock as they come. It doesn't produce a drop of oil and hasn't found any hydrocarbons in its 17 years of existence. Adding to its risks is the fact that it's drilling in an area not known to be rich in oil and gas, and in a country that has a higher risk of terrorism. Given these factors, buying stock in Zion Oil & Gas is nothing more than a high-risk gamble, even after today's sell-off.