Gas starts flowing in Levant basin, promising to turn the country into a net gas exporter.

Oil and gas driller Noble Energy (NBL) says its Tamar natural gas field off the coast of Israel is finally pumping gas, producing about 300 million cubic feet a day. Noble says its gross resource estimate of Tamar is now 10 trillion cubic feet, up from its previous estimate of 9 tcf.

In a way, the news has to make you feel sorry for Zion Oil & Gas, a small, ne'er-do-well exploration company seeking oil and gas in Israel based on interpretations found in the Bible. It holds three onshore licenses that have the clock running down on them -- the first one is set to expire next week, though it can be renewed through October 2014 -- and thus far its searches have come up empty.

Yet when you think about it, there should be oil there. It's been found on all sides of Israel. Total (TTE 1.67%) found oil north of the Sinai Peninsula in the 1980s, but the wells subsequently went dry; Isramco (ISRL) found oil off the coast of Tel Aviv, but never enough to make it profitable; and Noble found a large gas deposit in the Tamar field of the Levant basin. Several Israeli companies have also found oil and gas, but Zion keeps striking out.

According to the U.S. Geological Survey, the Levant basin is huge, with an estimated 1.7 billion barrels of recoverable oil and 122 trillion cubic feet of recoverable gas. It's not going to put Israel on par with Saudi Arabia, but it will be enough to provide a lot of the country's energy needs and even turn Israel into an energy exporter. It's expect to provide anywhere from 50% to 80% of the country's natural gas needs for the next decade. 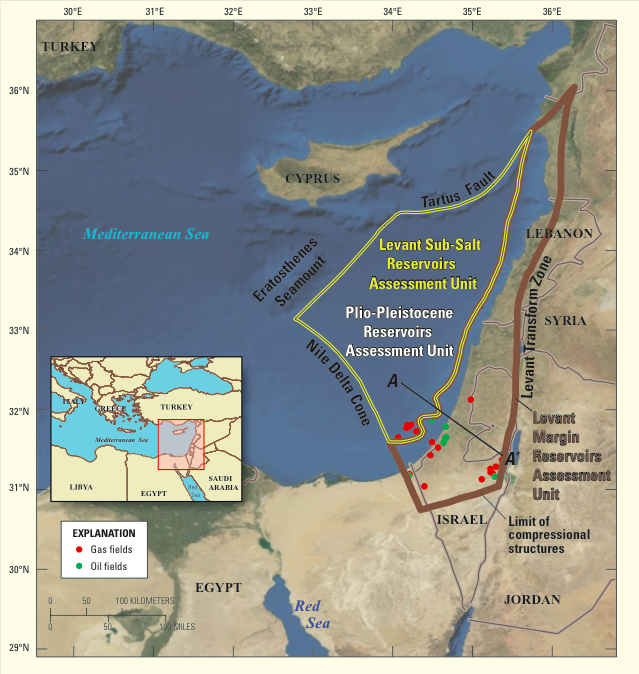 Noble has a 36% working interest in Tamar, with Isramco owning almost 29% and Delek, Avner Oil, and Dor Gas owning the rest. Noble expects to deliver up to 1 billion cubic feet of gas per day by the third quarter. Analysts look for it to add around $1 to its share price, which actually caused one firm to raise its target price from $147 to $148 per share.

Last month, Noble said the larger Leviathan field is estimated to hold 18 trillion cubic feet of gas. Together they could supply Israel's gas needs for 20 years. At less than 14 times earnings estimates, investors might want to take a second look at Noble Energy, even if it's sitting just under its 52-week high.