Get a better sense of what drives the tobacco giant's stock forward.

Investors look to Altria Group (MO -1.42%) for a combination of reliable dividend income and modest growth, and the tobacco giant has delivered on that promise for decades. Even though Altria has faced challenges along the way, it has thus far been able to overcome them, and shareholders are optimistic about the company's prospects going forward.

The following charts tell a bit about Altria's success and what it's likely to do in the future, and that's valuable if you're looking at a potential investment in Altria stock right now.

Altria has a well-earned reputation for being generous with its dividends. The company has boosted its dividend 50 times in the past 47 years, and the nearly annual increases have been more than just token payment boosts. For the most part, though, Altria's dividend increases have merely been in line with earnings growth over time. Throughout the 1990s and early 2000s, Altria sought to keep its dividend payout ratio within a relatively stable range, with figures typically staying between 50% to 60% when you smooth out the inevitable ups and downs of the business cycle. 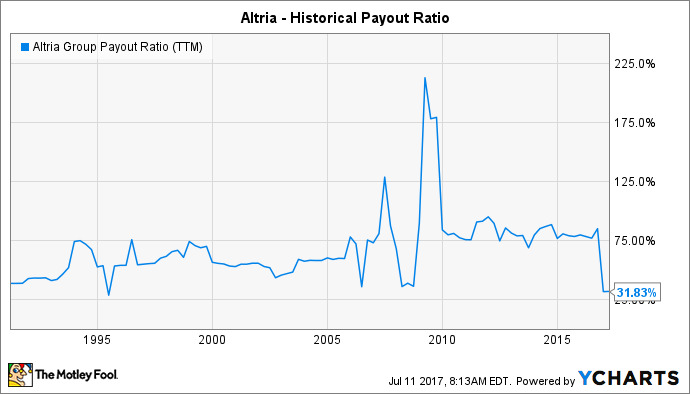 When Altria bought smokeless tobacco company UST in 2008, it made an official pronouncement that returned more capital to shareholders. The company said that it would target a dividend payout ratio of 75%, representing a nice boost for investors. Altria later raised that figure to 80%, and that's where its current target is today. The chart above shows the success that Altria has had in keeping its payout close to that figure, with only the one-time factor of the capital gain from the sale of its SABMiller stake artificially pulling down the payout ratio recently.

...but yields have fallen over time

You'd think that with a higher payout ratio, Altria would have seen its dividend yield rise compared to where it was in past years. The opposite has been the case. In recent years, Altria's dividend yield has fallen, hitting levels it hasn't seen since the 1990s.

The drop in dividend yield doesn't reflect any fundamental problem with the company's dividend payouts. You can see below that Altria has maintained a consistent upward track with its dividend payments, with the only exceptions happening as a result of corporate actions to spin off parts of its business into separately traded securities. 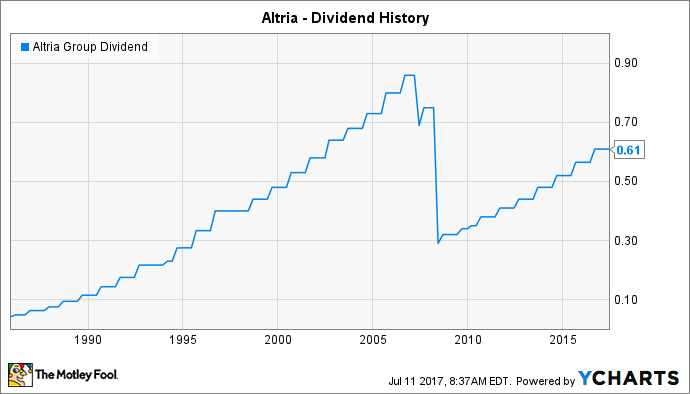 The culprit is the trend among investors to value dividends more highly. During most of the 1990s and 2000s, bond yields were relatively high, and so investors looking for income from their investment portfolios could turn to fixed-income investments to provide it. When bond yields fell in the financial crisis and its aftermath, investors suddenly couldn't rely on bonds and other traditional income investments to provide enough cash for their needs. They therefore turned to reliable dividend-paying stocks like Altria to bridge the gap. The subsequent demand for dividend stocks has lifted their share prices above where they typically trade. The chart below shows just how much Altria's trailing earnings ratio has climbed in recent years compared to its historical levels.

Altria's price-to-earnings ratio has reflected investor attitudes about risk tolerance for the tobacco giant's business. During the early 2000s, the threat of catastrophic litigation sent the stock's multiple into the single digits for an extended period of time, matching up with the boost in its dividend yield. Valuations reverted to their typical range of 10 to 15 times trailing earnings later in the decade. Only in the past few years have investors discarded Altria's traditional P/E range, sending multiples soaring into the 20s and again only dropping because of the SABMiller one-time gain.

What's ahead for Altria?

Investors can expect Altria to continue seeking steady growth in its earnings and to keep passing through those higher earnings in the form of rising dividends. What's impossible to predict, however, is whether shareholders will continue to value dividends to the same extent as they have in the past. If the company's earnings multiple contracts, then Altria investors would suffer even if the tobacco giant's fundamentals remained strong.

Altria has gotten through similar situations in the past, and although its share price is just as susceptible to ups and downs as any other stock, it has done a good job of producing solid long-term returns. Long-time investors have reason to be optimistic about Altria's prospects for the future.

What the Smartest Investors Know About Altria Stock