If you used a Blue Rhino propane tank to fuel the grill at your Fourth of July cookout, then you were using a branded product from Ferrellgas Partners, L.P. (OTC:FGP). Despite the regional name recognition for several of its brands, the dividend stock is trading at all-time lows. That's quite a statement considering the company has been publicly traded since 1994.

The main reason for the company's stunning drop in the past 12 months is simple: The partnership cut its distribution payout by 80%. It was the right thing to do, but there's still a long road ahead before the company gets back on the right track. That puts investors in an awkward position. Given everything that has happened and looking ahead, is Ferrellgas Partners, L.P. stock a buy? 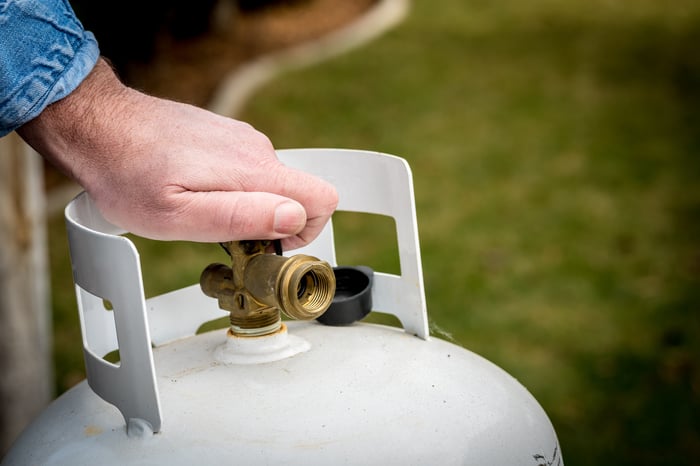 Last November, Ferrellgas Partners announced that it would be cutting its distribution payments from $2.05 per share to just $0.40 per share. That's because the company's debt grew 70% from fiscal yea 2013 to the fiscal year 2016 thanks to a mostly botched expansion into midstream operations. Revenue has only increased 3% in the same period. Therefore, it needs to free up operating cash flow to begin getting a handle on its deteriorating balance sheet. And it can only do that by drastically reducing its distribution.

Whether or not the move pays off in a reasonable amount of time depends on the health of the business. The company reports three segments. The core focus is, and always has been, propane and gas liquid sales, which comprised 70% of total revenue in the first nine months of fiscal year 2017. The second largest segment is midstream operations, which has actually catalyzed the company's precipitous fall in the last year. The company tidies up smaller businesses and other loose ends in a segment called "other."

Here's how they stack up through the first nine months of fiscal year 2017, which concluded at the end of April.

Aside from an uptick in propane and gas liquids sales, investors witnessed a decline in revenue and gross profit from every other part of the business during the comparison period. However, the most important aspects of the business -- and its ability to pay down its debt -- are earnings and operating cash flow. Investors have mixed results to digest.

For instance, EPS during the first nine months of fiscal year 2017 registered at $0.02, although that includes multiple quarters of getting the house in order. During the most recent quarter the company reported EPS of $0.07, which isn't close to historical levels but is better than reporting a net loss. 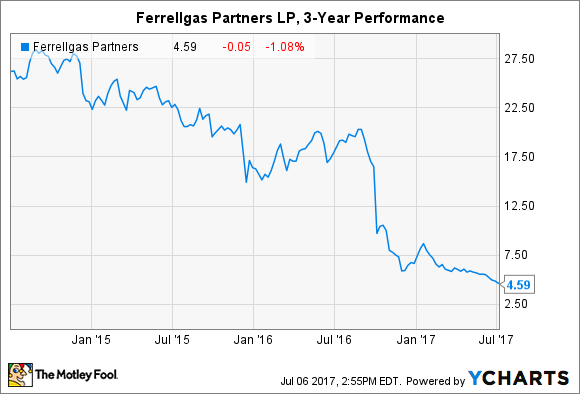 Then again, Ferrellgas Partners reported cash from operating activities of $118 million during the same nine-month period. That's well below the $220 million posted in the year-ago period. Although, once again, the most recent quarter carried most of the progress: $79 million of that total was generated in the most recent three month period.

While I can see that this is a great opportunity to apply the "be greedy when others are fearful" investing adage, I'm not convinced that Ferrellgas Partners is a buy. It still needs to prove it can generate enough cash from operations to begin paying down its hefty debt pile and do so consistently -- meaning for several consecutive quarters. And that's the problem: All three business segments are sliding at exactly the wrong time. So, even though there may be opportunity to buy the stock at an all-time low, it's probably too risky for most investors.

At an All-Time Low, Is Ferrellgas Partners, L.P. a Buy? @themotleyfool #stocks $FGP Next Article
Current